More Than the Rainbow DVD Review

Title: More Than the Rainbow

Nobody wants to drive a cab forever. As a New York City cab driver, Matt Weber has seen a lot of the city and fortunately was able to capture the sweet and the sour on film. Long since retired from his driving gig, he devotes his time to his photography and has collaborated with designer Todd Oldham on a book showing off his travels on the subway.  He along with several other converted photographers share stories of how their lives changed once they picked up a camera, set with a soundtrack by Thelonious Monk.

The Good: The photographs are amazing and each one tells a story, regardless what you think is going on at the time.   It’s inspiring that these people quit their monotonous lives to pick up a camera. I have a few photographer friends that just suddenly picked it up one day and are making a living off of them. Whether it be analog or digital, if you have the drive and basic know-how, you can be a photographer. A lot of people are opposed to black and white photographs, but Matt explains and shows examples of how sometimes color is best, but there’s more depth and mood portrayed in black and white.

The Bad:  Not a Thelonious Monk fan. Yes the music was fitting with the black and white photos, but I found myself bored and drifting off when only the music accompanies the slideshow of photographs.

I took a photography class back in high school, and this was in the days before digital and photoshop. I got marked down because I thought outside the box and took pictures of random oddities I found along the roadside, while the teacher’s ass-kissers took pictures of boring stuff like flowers and portraits of their friends.  I guess my favorite part of the documentary is when Matt shows his favorite black and white photo of a rainbow, with random oddities in the foreground that gives the photo a feeling of  something personal. The rainbow is still there, but “there’s more than the rainbow,” he says.  It just made a lot of sense to me. 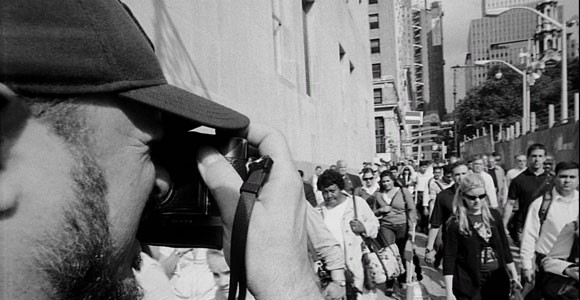