A film with a title as schlocky as “Septic Man” has… well, a certain potential, let’s be honest. And yet this willfully distasteful Canadian horror flick — which almost emits an unwholesome effluvia of human waste and other bodily fluids directly through the screen — is borderline incomprehensible and thoroughly unengaging throughout, lacking even in enough distinctive personality to make it worthwhile for self-flagellating fans of low-budget shock and gore.

The film unfolds in a small town in Ontario, Canada, where an opening credits narration informs viewers that there’s something in the water. Sewage worker Jack (Jason David Brown) is approached by a strange man, Phil (Julian Richings), who offers him a considerable amount of extra money to stay behind for a special clean-up. Since Jack has a pregnant wife, Shelley (Molly Dunsworth), at home, this is appealing to him. In short order, though, after Jack descends into the sewer system, he’s stuck, and then tortured by two psychotic brothers, billed as Lord Auch and Giant (Tim Burd and Robert Maillet, the latter playing a hulking simpleton who paradoxically comes across as possessing the most multi-dimensionality). From there, he’s on a brown bullet train to madness, covered with increasingly swollen boils.

“Septic Man”‘s production value — its lighting and editing and cinematography, the latter by Brenda Uegama — is generally pretty good, or at least a cut above a lot of its low-budget genre brethren, in spite of the movie’s high degree of commitment to nausea-inducement. (I lost track of the number of times characters vomited.) But helmer Jesse Thomas Cook sometimes dips into a bag of too-familiar directorial tricks (echo sound effects to denote a hallucination), the musical selections are either bland or emotionally off-key and Brown (even before he becomes increasingly buried under his character’s make-up) is an utter bore.

Worst of all, the plot is just tedious. Screenwriter Tony Burgess, working from a story concocted with Cook, crafted a much, much better slice of low-budget horror in the form of the genuinely creepy “Pontypool” (that film’s Stephen McHattie cameos here, as a sleazy mayor seen in a couple direct-address cutaways). But “Septic Man” is just an arbitrary mess. Things build, in air-quote fashion, to a scene that wants to rival the revelation of David Lynch’s “Eraserhead” baby. And then Jack and Shelley get to share one last moment together. But “Septic Man” is just a big, messy handful of stupidity and grossness, to be blunt — lacking any sort of unifying gonzo aesthetic or queasy tone. Even Lloyd Kaufman couldn’t get on board with this. 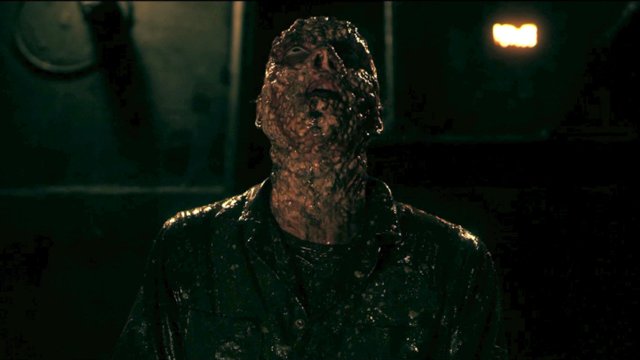