People don’t always understand the emotions everyone around them are experiencing, even if they’ve been through the same situations in life, as everyone reacts to each circumstance differently. This is certainly the case in the new drama, ‘The Skeleton Twins,’ which was directed by Craig Johnson, who co-wrote the script with Mark Heyman. The film’s title characters passionately emphasize that no matter how much people know each other, and how intense the situations they share are, they need to talk about their thoughts and experiences before they can truly understand each other.

‘The Skeleton Twins’ follows estranged twins, Maggie (Kristen Wiig) and Milo (Bill Hader), who live across the country and haven’t spoken to each other in a decade. Maggie tried to settle down and enjoy domestic life in their hometown of Nyack, New York, after marrying Lance (Luke Wilson) and becoming a dental hygienist. Meanwhile, her brother moved to Los Angeles, in the hopes of becoming an actor. However, he hasn’t fulfilled his dreams, as he’s currently working as a waiter. The two siblings haven’t been able to find contentment and happiness in their lives, after their committed suicide when they were 14. Their mother, Judy (Joanna Gleason), is a self-absorbed self-help guru, who still hasn’t developed enough of a maternal instinct to help her children.

While the twins haven’t seen each other in 10 years, their minds and emotions are still in tune, as they’re both presently on the verge of self-destruction. Maggie is pondering whether or not she should swallow a handful of pills when she receives a phone call from a hospital in California, informing her that Milo has just tried to kill himself by slitting his wrists. She goes to L.A. to bring him back to New York with her, in an effort to bring him stability and time to recover.

While Milo reluctantly acknowledges that he needs to change his lifestyle, his road to recovery is obstructed by lies and secrets he’s keeping from Maggie. One major obstacle he faces is the fact that his boyfriend in L.A. just left him, so he seeks out Rich (Ty Burrell), with whom he had a scandalous affair when he was a teenager. Despite Rich’s initial hesitance, the two rekindle their bond during Milo’s stay in Nyack.

Maggie is also keeping secrets, as she is engaging in an extramarital affair with her scuba diving instructor. While she knows Lance truly loves her and wants to start a family, her fear of being a bad parent like her mother makes her afraid to have children. During their reunion, the two siblings both realize that in order to truly be happy, they must not only be honest with the people around them, but also most importantly, themselves.

While Wiig and Hader previously worked together on such comedy projects as ‘Saturday Night Live’ and the 2009 comedy film, ‘Adventureland,’ their reunion in the harrowing and emotional exploration into how childhood experiences can truly shape the rest of a person’s life is their most enthralling effort together yet. The two actors smartly infused their title characters with a drive to find their true meanings and identities, after continuously doubting their self-worth for years, in part because of their mother’s emotional neglect and their father’s death.

While Milo appears to be contending with more personal and professional worries than Maggie, as he hasn’t been able to launch his acting career, and is incapable of maintaining his romantic relationships, both siblings are desperately trying to accept the paths their lives have taken. Both actors, who are primarily known for their comedic abilities, were grippingly unafraid to mix their uncanny humor with deep pondering on how their unconventional upbringing traumatically tore them apart.

Johnson and Heyman, a BAFTA-nominated screenwriter of the acclaimed psychological thriller, “Black Swan,” smartly utilized Milo and Maggie’s botched suicide attempts as the launching point of ‘The Skeleton Twins,’ as opposed to the film’s climax. Starting the family-driven drama with the lowest points of the siblings’ lives, and chronicling their slow and unsteady attempts to regain control of their relationships and futures, powerfully emphasized their road of recovery is just as painful as their crashing descent. Both Maggie and Milo continued to find it to be easier to lie about what they’re doing and what they want from life to everyone around them, even after they faced death, as they’re afraid to admit their lifestyle choices aren’t as ideal as they should be.

Mikaela Wohl, the costume designer on ‘The Skeleton Twins,’ also creatively showcased the distinct personalities of Maggie and Milo, and how they differently approached life, throughout the course of the drama. Maggie was often outfitted in drab, monotone shirts and pants that emphasized the fact that she often blended into the background, and allowed the people around her to take control of every situation. Meanwhile, Milo sported catchier, more flamboyant designs that accentuated his love of continuously garnering attention from everyone around him.

The most intriguing clothing styles Wohl created for the scene where the siblings attended the Halloween festivities in their childhood town. With Milo dressed as an elegant woman in a showy gown and overstated blonde wig, and Maggie as a classic cowgirl, the two title characters proved they could truly move past their insecurities if they put their minds to it.

‘The Skeleton Twins’ is a commanding and meaningful examination of a harrowing relationship between two twins who were once close, but are no longer able to connect with each other. Wiig and Hader impressively combined their natural humor and wit into a dramatic story driven by examinations of such important issues as suicide attempts, abandonment and infidelity. Johnson and Heyman smartly afforded the two actors the chance to explore the serious consequences of these serious issues, particularly after traumatic experiences throughout their characters’ lives. Combined with the ingenious costumes created by Wohl for Maggie and Milo, the movie is a heartfelt and gratifying look into what it really means to support the people you love, no matter what mistakes they’ve made in their lives. 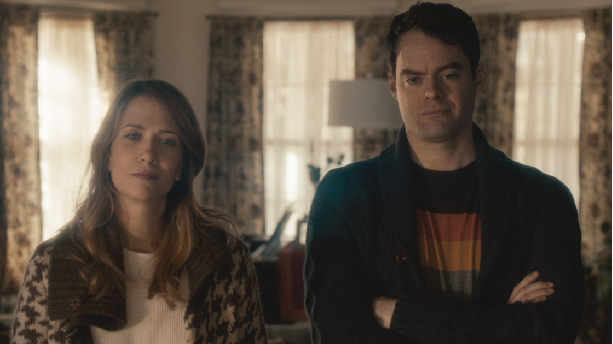