We’ve come a long way, haven’t we?  From outright hostility toward gays, from families throwing their children out of their homes upon discovering their sexual orientation, we now have at least the more progressive states endorsing not just gay rights but gay marriage.  To think otherwise nowadays marks you as some sort of reactionary, denying marriage equality to a people that allegedly make up ten percent of the population.  While a large part of the world still considers homosexuality a crime punishable by sentences as severe as death, Great Britain during the 1980s was divided, with macho organizations like coal miners unmistakably in the camp of homophobes.  This would change, as we find out from Matthew Warchus’s feel-good movie “Pride,” which is based on actual events during a prolonged strike of the National Union of Mineworkers, with Prime Minister Margaret Thatcher determined not to give in, but to break the organization of perhaps the hardest-working people in her country.

Beginning in June 1984, as Stephen Beresford’s script tell us, Joe (George MacKay), a twenty-year-old naïf training to be a chef and who is a closeted gay, joins the London Gay Pride March, sporting a camera just received as a gift from his parents—who had no idea of their son’s sexual orientation.  The small group of diverse people, mostly young, form LGSM, or Lesbians, Gays Support Mineworkers, choose at random a small Welsh town that is the home of striking coal miners and begin to take up a contribution to be used principally for food for the union members. Characters like Mike (Joseph Gilgun), Gethin (Andrew Scott), a bookstore owner, and Jonathan (Dominic West), an actor get together with Steph (Faye Marsay), who is the only lesbian in the club.

When the brass at the union want nothing to do with the prospective ally, the band bus themselves to Onllwyn in Wales and are welcomed by Dai (Paddy Considine).  As the gays collect money in buckets, they are met by the obligatory bashers who, if the LGSM are lucky are simply spat upon, though one of their number ultimately lands in the hospital after a severe beating.  The mineworkers themselves seem unanimous in rejecting their new benefactors, but of course as the story progresses and as the two groups get together and socialize over beer, they realize that “the other” is human as well.  An elderly miner played by Bill Nighy and a community leader played by Imelda Staunton (whom you remember as the abortionist in Mike Leigh’s 2004 film “Vera Drake”) add zest to the proceedings, which yield not only the new camaraderie between miners and “perverts” (as the gays call themselves to “own” the pejorative) but a new entente between one young man and his family.

Though the feel-good aspects of “Pride” cannot compare to the uplifting climax of “Whiplash” (the year’s best movie to date), superb ensemble acting make this a fun movie to see for the whole family (if that includes reasonably mature kids). 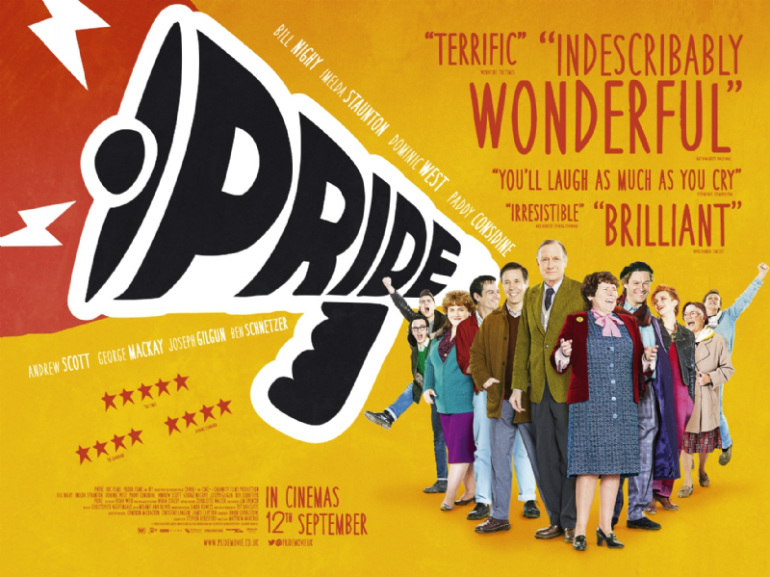