Captivatingly proving to the world that you’re more versatile and calculating than anyone truly expects, and striving to find redemption after the manipulative actions you take to get what you want, are the gratifyingly effective traits that drive director David Fincher’s new mystery thriller, ‘Gone Girl.’ The drama, which is based on the acclaimed 2012 novel of the same by Gillian Flynn, who also penned the screenplay, offers a captivating look into the cunning action scorned spouses take against each other when the love and passion between them begins to fade. The Academy Award-nominated director also revitalized his helming efforts by focusing on how people’s diverse personalities and views on life drive them to take drastic measures, instead of solely on the radical actions themselves.

‘Gone Girl’ opens on the fifth wedding anniversary of Nick Dunne (Ben Affleck) and his wife, Amy Elliott Dunne (Rosamund Pike), as they struggle with the growing tension in their increasingly volatile relationship. When he returns home after spending time with his sister, Margo (Carrie Coon), in the bar they co-own together, he’s surprised to walk into what appears to be a crime scene, and discovers his wife is missing. The lead investigator who’s called onto the case, Detective Boney (Kim Dickens), and her team begin to suspect there was fool play between Nick and Amy, after finding trace evidence that supports he attacked her.

Amy’s parents, who are the famous authors of a popular children’s book series, travel from their home in New York to North Carthage, Missouri. While fans of the book series, as well as the couple’s neighbors and community, begin to volunteer to help in the search for Amy, Nick almost immediately becomes the target of media attention. Since he isn’t acting the way the county believes a grieving husband should behave, Nick is quickly labeled the prime suspect in the crime, which Detective Boney and her team begins to believe is murder.

As Nick sets out to prove his innocence in the case, his relationship with Amy is shown through flashbacks. The couple moved to his small hometown two years prior to her disappearance, to help care for his terminally ill mother after she was diagnosed with cancer. But they’re still struggling to survive in their new home; they were both laid off from their writing jobs in New York during the recession, and Amy gave up most of her trust fund to her parents, who were immersed in debt. With the help of his high-powered New York defense attorney, Tanner Bolt (Tyler Perry), Nick tries to point to the fact that while his marriage isn’t perfect, Amy also had problems in her previous romantic relationships, including with her high school boyfriend, Desi Collins (Neil Patrick Harris).

While Affleck smartly infused his troubled anti-hero with an alluring intensity to uncover the truth behind Amy’s disappearance and his determination to prove his innocence in the case, Pike offered the most alluring performance in ‘Gone Girl.’ The British Independent Film Award-winning actress initially portrayed the captivatingly mysterious Amy as cultured and sophisticated when Nick is recalling the beginning of their relationship to the police. The graceful elegance Pike offered to the role when Amy was first falling in love with Nick makes it easy to question why he seems so nonchalant about her disappearance.

But once Detective Boney and Bolt both truly begin examining Nick and Amy’s marriage and histories, and Flynn began divulging more details from the fraught wife’s point of view in the story, all doubt about who caused the stress in the relationship powerfully disappeared. With the help of Pike effortlessly transforming Amy into a scorned wife eager to hurt her husband, who she’s come to view as being disreputable, the writer offered an intriguing insight into the irrevocable pain the spouses inadvertently inflicted on each other, particularly after they moved to Missouri.

Fincher, who has garnered fame for the diverse films he has directed throughout his career, including ‘Seven,’ ‘The Curious Case of Benjamin Button’ and ‘The Social Network,’ once again proved his helming talent by reverting back to telling the type of story he best connects with on screen. With ‘Gone Girl,’ the filmmaker once again captivatingly followed a group of emotionally troubled characters trying to make sense of their plights, against a backdrop of all-important societal and personal issues. Fincher smartly skipped the self-indulgent glitz he infused into the characters of his last directorial effort, the 2011 American remake of ‘The Girl with the Dragon Tattoo.’ The helmer instead smartly infused his latest drama with characters with powerful personality traits and surprising twists that are reminiscent of those fascinatingly seen in his movies, Fight Club and Zodiac.

In ‘Gone Girl,’ Nick is enthrallingly and understandably driven by enraged disdain for wrongfully being accused of his wife’s disappearance. But the most important aspect of the mystery thriller is what should legally and morally happen to people who potentially not only hurt their spouses, but everyone around them, which is captivatingly seen in Amy’s clear and callous deception of her husband and community.

Fincher clearly and powerfully returned to his ease of chronicling the deceiving and calculating personality traits and actions of cunning individuals, whose true nature is shockingly presented after viewers are led to believe they’re the ones being misled, throughout the chilling story in ‘Gone Girl.’ The moral and legal implications and repercussions the characters wittingly and cunningly unleash on the people they seemingly love prove the director is once again cleverly relying on emotions, instead of visual shock value, to captivate audiences’ thoughts on how everyone truly relates to each other. Combined with the intriguingly tumultuous feelings Affleck and Pike infused into their respective characters, and how their disdain for each other drives them apart and ruins their lives, ‘Gone Girl’ is a fascinating insight into how couples truly regard each other, in both their private and public lives. 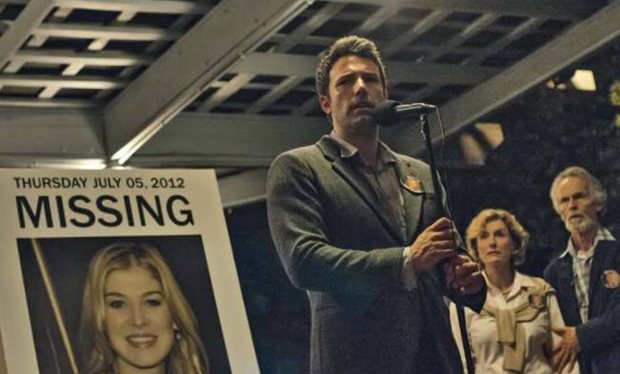