Powerfully and captivatingly exploring your deep-rooted emotions, desires and ideals during a period of intense personal exploration, as you struggle to find your true purpose in life, can be a harrowing obstacle. But once you find your true passion that completely fulfills your sense of self, you undoubtedly begin to feel like you found your real purpose in life. That struggle to overcome any challenges you’re faced with, and becoming completely happy in your life, is enthrallingly explored in writer-director Olivier Assayas’s new drama, ‘Clouds of Sils Maria.’ The movie, which screened for the press on October 8 at the Film Society of Lincoln Center’s Walter Reade Theater during the 52nd New York Film Festival (NYFF), not only emphasizes the profound realizations the two main characters come to terms with while examining their relationship, but also highlights the authentic chemistry and prowess of actresses Kristen Stewart and Juliette Binoche.

‘Clouds of Sils Maria’ follows the career dilemma world renowned actress Maria Enders (Binoche), who has achieved success both in serious European theater and Hollywood blockbusters. She achieved her breakthrough and career-defining role when she was just 18 in a film written by her mentor, Wilhelm Melchior. The actress played the role of Sigrid, who emotionally scars her boss Helen, who’s twice her age and has become obsessed with her.

Now, following Wilhelm’s shocking death, Maria must come to terms with her experience on the film, as she has been asked to play Helen in a London stage production of the story. The prospect of playing the older woman, particularly alongside up-and-coming Hollywood starlet, Jo-Ann Ellis (Chloë Grace Moretz), who has become more well-known for her DUIs and shocking behavior than her acting, is both enticing and terrifying to Maria. Playing Helen, particularly alongside Jo-Ann’s portrayal of Sigrid, forces Maria to contend with her own aging and mortality.

Maria’s struggle with the decision of whether to follow through with the play is also heartbreaking to her in the sense that her views on Helen and Sigrid’s illicit affair reflect the quickly changing dynamics with her personal assistant, Valentine (Stewart). While the two continuously run lines for the play in an isolated inn they’re sharing in the Alps, the women’s increasingly clashing views on life and their ideals about relationships make them not only question their respective careers, but also their lives’ ambitions and personal relationship with each other.

During the press conference for ‘Clouds of Sils Maria’ following the NYFF press screening, Binoche revealed she became involved in the acclaimed drama because she wanted to delve into a project that dealt with feminine values. The actress explained, “I began thinking, ‘Who do I want to make this (type of) film with, who can really write about it?’”

So Binoche called Assayas with the idea, and the two had an open discussion about the world she wanted to explore. The filmmaker asked the performer to give him time to think about how to best explore the subject on screen. “He said, ‘Give me two weeks to write something, and see if something comes out of it,’” the actress revealed.

The French performer noted that after the two-week period the director asked for, during which he was characteristically working on a few different ideas for various projects, he came up with an initial idea for ‘clouds of Sils Maria.’ “Then I had a script a year-and-a-half afterwards, and I felt like I provoked him, but he provoked more than I did,” Binoche added.

Stewart then revealed that when she was first approached to take part in ‘Clouds of Sils Maria,’ she was asked to play Moretz’s part. “It was something that I knew so well,” the former ‘Twilight’ star explained about the Jo-Ann role, adding “that it wasn’t something that I was interested in living.”

Since the story is heavily told through Maria’s perspective, “the perception you get of (Jo-Ann) is narrow, just because of the eyes you’re seeing her through,” Stewart elaborated on why she instead gravitated to the role of Valentine. “I wanted to play something that I observed but had not done,” the star also noted on her desire to bring Maria’s personal assistant to life.

While Assayas initially did want Stewart to play Moretz’s role of Jo-Ann, he agreed that the reverse casting “would have (made it) a completely different film.” The writer-director also admitted to the ‘Camp X-Ray’ star that “when you told me you preferred the part of Valentine, I completely understood what you were saying, and I understood you were right.”

Stewart also praised Assayas and Binoche’s work and ideas, saying she “obviously wanted to work with the both of them. I had to reign in the glee on my face. I had to make sure my cheeks weren’t turning red and I wasn’t in hysterical laughter when I said some of the lines that I said in the movie.”

The young actress also admitted that her “experiences and the life that I’m living gave it this (film) irony,” and felt that her ease of understanding Valentine made the drama more relevant. While Stewart quickly gained notoriety of her own while filming and promoting the successful ‘Twilight Saga’ film, series, and understands how fame affects celebrities, she doesn’t think ‘Clouds of Sils Maria’ is a commentary on media.

Instead of focusing on social observations, “I just think the relationship between these two women is so unique,” Stewart praised of Assayas’ work. “Most of the scripts I read, especially when you compare them to European filmmakers, have a certain set of dynamics that are reiterated, and it never stops.” The actress was amazed that Valentine and Maria meant everything to each other, and thought it was interesting that you “can’t categorize their relationship.”

Binoche also embraced the fact that Maria and Valentine are so close. To help emphasize their connection, the two stars started rehearsing at the beginning of the shoot, but they ultimately didn’t think the process was helpful. “Kristen’s way of working is completely different than mine…she would ask for the script that morning, and quickly learn (her dialogue). But I would ask for the script pages a month in advance!” But Binche, who thought her co-star had a seed of genius in learning her lines, felt that “not knowing what the other was going to play was more interesting,” Binoche divulged.

Assayas allowed the two to explore their scenes together as they were shooting, as with every take they filmed, each one delved deeper into their emotions. Binoche thinks the director’s greatest quality is allowing things to happen on the set as they occurred. “There was a freedom in the way he directed that was secretive,” but his approach allowed the acting duo to fully discover who they are.

“I started with the idea that I wanted to use Juliette in a film as Juliette,” Assayas revealed about his directorial approach. “That’s how that narrative took shape.” While the filmmaker wasn’t necessarily attached to the idea that Maria was an actress, he “realized when I was writing that the work of an actress is not so much about the superficiality or the technique of acting. It’s about absorbing humanity. It’s about the way of finding the truth of a person’s universal emotions.” So he didn’t view the drama just as chronicling the emotions of an actor; even though he thinks “showing the day to day work of an actress is beautiful.”

“When you’re in a play, you’re in the core of the emotion,” Assayas also explained about why he decided to have Maria rehearse, and ultimately perform, in a theater production, instead of a film. “I wouldn’t have been interested in having Valentine and Maria rehearse for a film, because it’s not the same approach.”

The director was also interested in including the play Maria is performing in, because “it has to do with aging and more complex issues, like desire…this s an actress who’s trying to understand what’s going on in her head.”

Maria’s struggle to fully connect with her character in the play is partly reflective of her personal relationship with her own younger assistant, and the slow acknowledgement that she has become too emotionally and mentally dependent on Valentine. Binoche noted that in a way, she played three characters in the movie, as Maria realizes she has largely been affected by her ever-changing relationship with her employee.

“I played…(Maria) at the beginning, the (actress during the) working time, and then in the end it comes up to the character she’s playing. The challenges (were) showing the difficulty of what it takes to act. There’s a sort of subjugation of yourself as an actor, because you’re putting yourself into layers of emotions that you don’t always want to go through, since they are tough ones.”

Assayas praised the three lead actresses in ‘Clouds of Sils Maria,’ saying he “realized how much Kristen, Juliette and Chloe gave of themselves. Not in the sense of your work but of your own identity. It’s a movie where you never forget you are watching those actresses. The fact that you know those actresses are playing those parts is what the film is about.” The writer-director hopes viewers realize they’re watching both the actress and the part, and truly appreciate what the performers gave to their roles.

Watch a clip, and check out exclusive photos, from the ‘Clouds of Sils Maria’ at the 52nd New York Film Festival below. 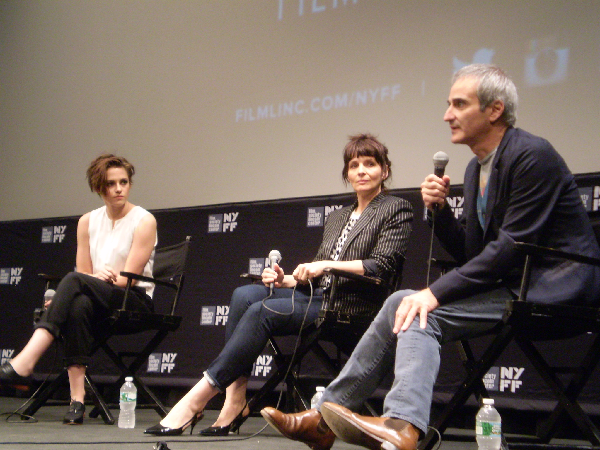 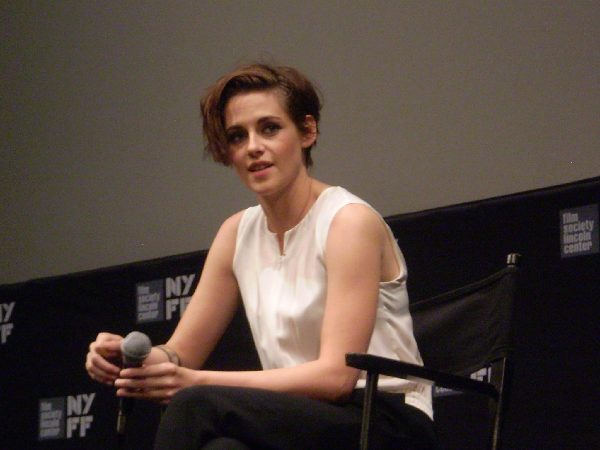 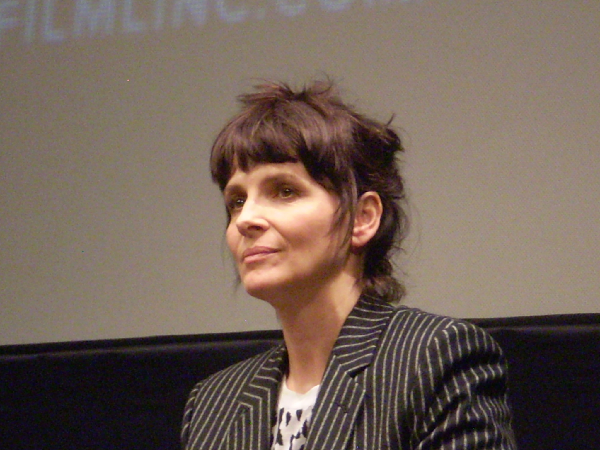 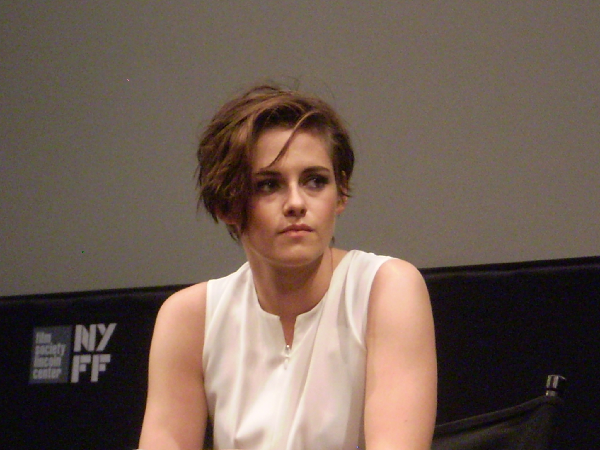 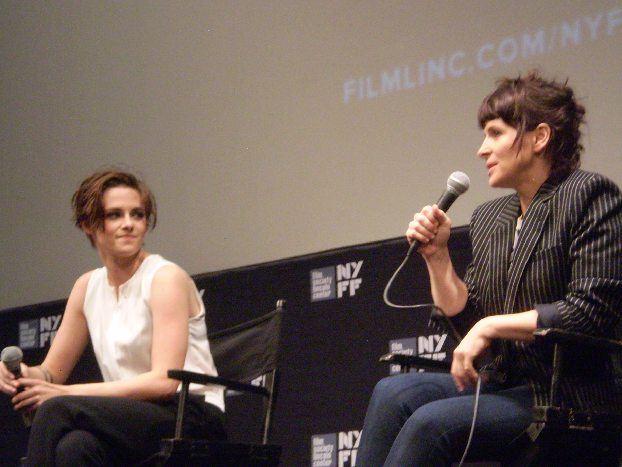 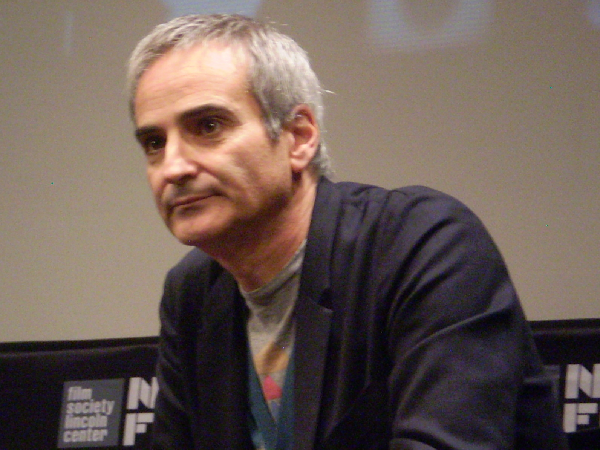 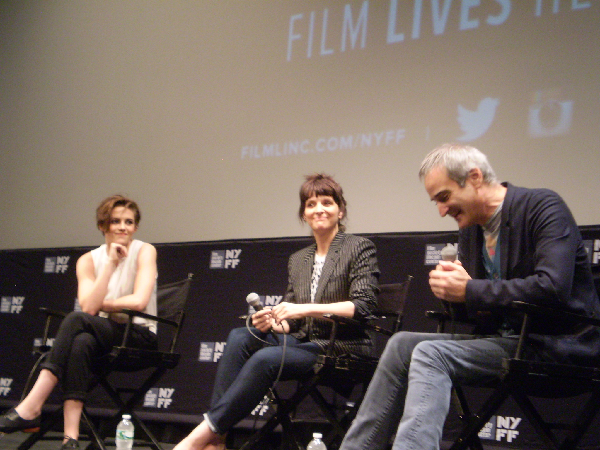