The awards season race is really starting to heat up, and right in the middle of it comes the release of Bennett Miller’s latest film ‘Foxcatcher.’ The ‘Capote’ director continues his filmmaking crusade, capturing incredible real life stories and retelling them in a cinematic way. ‘Foxcatcher’ hasn’t even been released yet, but the critical acclaim for the film and performances has all of Hollywood ablaze with possible Oscar talk. But when that thin layer of Oscar buzz is peeled away, movie-goers will see this strange and real tale of a wrestling duo who get mixed up with a peculiar millionaire.

The three main actors headlining the picture have been revered for their individual performances in ‘Foxcatcher,’ particularly Steve Carell. The normally comedic actor ditches the smile, physically and mentally transforms himself to embody millionaire John du Pont. There’s a considerable air of uneasiness that fills key scenes between him and the two wrestling brothers (played by Mark Ruffalo and Channing Tatum) which is pretty evident to see.

ShockYa got the great opportunity to sit down with a few journalists to talk with Channing Tatum and Steve Carell about their career highlight performances in ‘Foxcatcher.’ They also go into great detail about the physical and mental hurdles they had to go through in order to get their roles perfect. 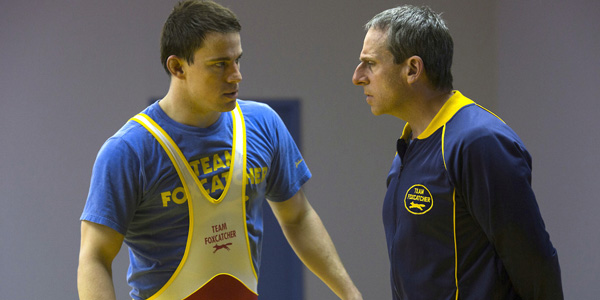 Channing, it looks like you took some hard hits in this movie. Can you talk a little bit about what that was like? And also working with Mr. Carell and Mark Ruffalo, what did you admire about them and working with them?

Channing Tatum: Yeah, the hard hits, I don’t think they’ll ever leave my body for sure. You can’t fake wrestling, which we learned very, very quickly. We can fake punch, but with wrestling you just have to go ahead and do it. You really need to see the hand hit the face, the head butting and everything. So it was by far, and I don’t say this lightly, the hardest thing I’ve ever done physically. It was a suffocating and very painful thing, but I’ve gotta say at the end of the day I’m so just in awe of those athletes, and very, very proud to been given such amazing time and focus through probably some of the most amazing athletes I’ve ever moved with. It was a blessing.

Steve Carell: He picked me up like I was a sack of sugar and laid me gently down on the mat.

Channing Tatum: Steve’s actually a great athlete, and I was in awe of just getting to work with them. They’re such, I guess they’re so in control with what they do acting-wise, and Steve’s ability to stay in a scene is pretty unbelievably deep. Mark [Ruffalo], I mean he’s actually my literal big brother now. I’ve said it to him “Whether you want it or not, I’m your little brother now.”

In the film there’s that great scene where you and Mr. Ruffalo are practicing blocks, and it’s sort of this form of communication. There’s a lot of this film where you’re doing tremendous things with silence. Could you talk about the silent aspects of working in this film?

Channing Tatum: Wrestling is… there’s a lot being said to each other without talking. You’re in a quiet gym and you just hear grunts, slams, slaps and breathing hard. The way that you hand-fight is it’s a bit of a chess match. You’re constantly baiting and trying to set up something that you want. It’s really interesting, I think throughout Mark and I’s journey through finding these two men in us, we had to go through a lot of very humbling and … you don’t feel like you’re doing very well at all, especially in the beginning when you’re learning. One person is getting something better than you are, and I think Mark and I both were just there for each other throughout that learning process. Knowing what each other was struggling with, we learned on a very kind of small, small level what it is to really be there for someone on that level. There was about 20 other pages before that scene where Ruffalo and I have scenes together where we’re talking and he’s being a big brother. We could just throw it out because you see it all in that one scene. You see it all and I think it really has to do with all the time and sort of just friendship we created through wrestling. 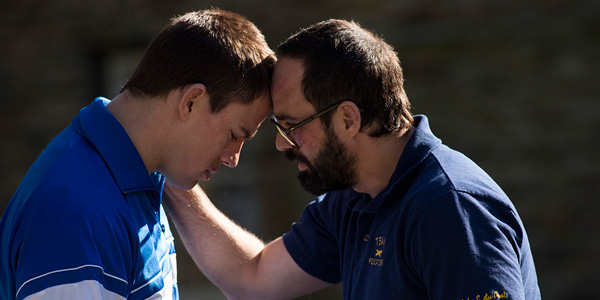 Mr. Carell, can you talk about emotionally preparing to play this character? Trying to get into his mindset, try to understand his motivations for your performance?

Steve Carell: I’ve thought a lot about how sad a person he was. His parents divorced when he was 2, he grew up in this enormous house essentially with just him and his mother, who, by all accounts is a pretty chilly person. So I thought a lot about that, who he was growing up and surrounded by wealth and I think insulated by that wealth. I think he was lonely and in need of things that he didn’t have the tools to acquire. So starting with that, I think that helped me along the way. He was somebody that I think was in need of assistance. He was somebody that didn’t have a circle of friends. He had a circle of employees, so no one was going to intervene. He didn’t have anyone who was there to see the red flags, and that’s incredibly sad and tragic to me. I never approached him as a villain. I never thought of him in that way.

Mr. Carell, Mr. Tatum; you two both go to some dark places. How did you come out of that? Did you have to do that on a daily basis or was that just at the end of the shoot that you came out of that?

Steve Carell: Was it on a daily basis? I don’t know about you, but I feel like the whole thing was all pretty dark. A lot of it I think was because Bennett sets a tone and it’s not a light, lively, effervescence place to be. But I think that was important. Everyone took it very seriously, and I think added to that were the people that were there. Mark was there, and Dave’s widow was there for a time. They were being very generous on it. I think we all felt a responsibility to them to be as honest as we could to the story and to stay in it. So yeah, it wasn’t fun.

Channing Tatum: Yeah, I can’t say anything about it other than that. We all just came in with the intention really of just going on this ride with Bennett. He says to jump and we say how high or how low. We just stayed in it and that was it.

If you took on this project knowing that this would be something special or something magical, or if something wouldn’t be the same after this film? Did you know what the result would be and how that might influence your future work?

Steve Carell: Well based on this press conference, people are referring to me as Mr. Carell. That in of itself is a change. I’ve never experienced that before. You get to work with somebody like Bennett [Miller], and you work with actors like Channing and Mark, and it is a different experience. The change for me is that I want to do more of this. It was challenging and exciting and exhilarating and I felt like it meant something. In terms of so much of a response that the film is getting, it’s very rewarding that it is resonating with people. I don’t ever know if I’ll do anything on this level again but I would aspire to because it’s been a great feeling.

Channing Tatum: I just think they’re all different muscles. Comedy doesn’t come easy for me. I’ve only done 2 movies that are really comedy-style films and I have to work at them. And they’re just as scary in a way. I hate labeling all these things; comedy, love stories, dark drama, whatever. They’re always different muscles, and this one I’ve only played one other person that was real before and it is that the stakes are very, very high. I have to live with Mark Schultz in the world in hoping I did some amount of justice for him. So things are a little bit more tangible, and they aren’t just in some make-believe, high stakes game that movies are. I enjoyed going deeper than I’ve ever gone into the character for sure. I can’t say that I want to do this forever, but I’ll just find them with the people I want to do them with and then go do them.