Get ready to be treated by horror icon Robert Englund in his anticipated film, ‘Fear Clinic,’ which is set to be released on Blu-ray and DVD on Febraruy 10, 2015 by Anchor Bay Entertainment. The highly anticipated and shocking movie, which is based ont he critically acclaimed and fan favorite 2009 FEARnet.com series, was directed by ‘Laid to Rest’ helmer, Robert G. Hall. In addition to the famed ‘Freddy Krueger’ star, ‘Fear Clinic’ also features Fiona Dourif, Angelina Armani, Thomas Dekker, Stone Sour and Slipknot lead vocalist Corey Taylor in his acting debut.

‘Fear Clinic,’ which was co-written by Hall and Aaron Drane, follows five survivors as they return to the title facility a year after they suffer a horrifying tragedy, as their trauma-induced phobias begin to re-emerge. They hope their visit to the clinic will lead them to find the answers they need to get cured.

Dr. Andover (Englund), a fear doctor who runs the clinic, uses his “Fear Chamber’ to animate their fears in the form of terrifying hallucinations. However, the good doctor soon begins to suspect that something more sinister may be at work, something that yearns to be more than just an hallucination.

‘Fear Clinic,’ which is set to sell for $26.99 for the Blu-ray and $22.98 for the DVD, will pre-book on January 7, 2015. Bonus features for the home release of the horror film, which was the Closing Night Event at ScreamFeast 2014 Los Angeles and the Opening Night Screening at the 2014 New York City Horror Film Festival, are set to be announced. 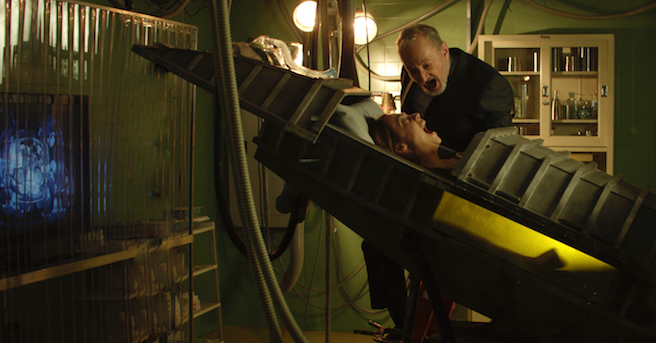