Collaborating with a long-time close friend on a project, and compassionately discovering along the way how much you truly care about the other person, is a powerful way to determine who the most important people in your life are, and how far you would go to protect and support them. Leigh Whannell, who co-starred, co-wrote and co-produced his new independent Australian drama, ‘The Mule,’ with his fellow ‘Insidious‘ actor, Angus Sampson, perfectly embraced each other’s vision and ideas for their latest film. Their natural understanding of each other’s ideas and work ethic effortlessly shifted onto the screen in the crime film, which is now playing in theaters and on VOD and iTunes, proving that although people don’t always agree, friends always have each other’s best interest in mind.

Set in Melbourne in 1983, ‘The Mule’ chronicles the life of the hapless title character, Ray Jenkins (Sampson, who also co-directed the movie with Tony Mahony), an outsider who lives with his devoted mother (Noni Hazlehurst) and stepfather (Geoff Morrell), a small-time criminal who owes money to the Mob. While Ray’s main talent is fixing electrical appliances at the local repair shop, he begins to feel pressured to make extra money to help repay his stepfather’s debt. After winning the Clubman of the Year award from his local football team for his loyalty, endurance and resilience, Ray strives to prove to the group’s leader, ruthless drug dealer Pat Sheperd (John Noble), that he really is capable of doing something.

So Ray reunites with his estranged best friend, Gavin (Whannell), who delivers Thai drugs for Pat, persuades him to join their next smuggling trip. While Ray is initially hesitant to swallow 20 condoms full of heroin, he eventually agrees, in order to protect his mother from Pat;s retribution against his stepfather. But once he arrives back in Australia, Ray begins to have doubts again, and raises the suspicions of airport security.

After refusing an X-ray and claiming he’s allergic to laxatives, Ray is taken into police custody by detectives, including the cunning Paris (Ewan Leslie) and the sly Croft (Hugo Weaving). The officers bring the suspect to a hotel for a week-and-a-half, and try to encourage him to make a confession about his involvement in the crime, as well as collect the evidence. Pat also sets out after Ray when he learns Gavin double-crossed him and he isn’t able to collect the drugs. With both the police and mob boss intent on making Ray pay for his crime and eager to retrieve the heroin, the unsuspecting first-time mule must find a way to protect not only himself, but also his parents.

Whannell generously took the time recently to talk about co-writing, producing and starring in ‘The Mule’ during an exclusive phone interview. Among other things, the actor and scribe discussed how he and Sampson found a way to come together to write the script, even though he lives in Los Angeles and the helmer lives in Melbourne, as they do their best work when they’re in the same place; how he and Sampson wanted to star in the film together, even before his co-star signed on to direct the drama and other helmers wanted to cast their own actors, as they shared a common vision on how the story and characters should be brought to the screen; and how he learned a lot about acting from his co-stars on the film’s set, including Weaving, Noble, Morrell and Hazlehurst, as they’re legendary Australian actors who bring an extra level of skill to their work.

ShockYa (SY): You co-wrote the new thriller, ‘The Mule,’ with Angus Sampson and Jaime Browne. How did you become involved in working on the script, and what was the process of co-scribing the screenplay with Angus and Jaime?

Leigh Whannell (LW): It was good, but it was also a long process. Angus and I are separated by a lot of water-he lives in Melbourne, Australia, and I live in Los Angeles. So geographically, that presents a problem straight-away. We found out that we like being together in the same room when we’re writing. We didn’t want to do it over the phone or Skype; we wanted to actually be sitting in the room together. That makes sense, as it makes it easier to talk about things, and you can laugh together. It doesn’t make it feel so disconnected.

But that meant the writing process took a long time. It was a couple of years before we had the script ready, but that’s okay. Each script is different. I can write some scripts in a couple of weeks, and I can’t believe I finished a draft that quickly. (laughs) But others need some time to age, like a bottle of wine. This was definitely one of those.

SY: Besides co-writing the script for ‘The Mule,’ you also star as Gavin, the drug dealer who convinces Angus’ character, Ray, to smuggle heroin into Australia from Bangkok for him. Why did you decide to also portray Gavin in the crime film? How did working on the script influence and inform your portrayal of Gavin overall?

LW: Angus and I decided early on that we wanted to act in the film. We thought, what’s the point of writing this film if we’re not going to also act in it? We wanted to do that-we didn’t want to write it, and then give it away to other people, and let them have a party. So we really stuck to our guns on that.

We actually met with some directors who didn’t want us in the film. They said, “Yes, I like the script, and I’m interested, but I can’t see you guys playing the roles. I want to cast my own actors.” That was fair enough. But it was a decision we made early on that we really stuck to while making the film.

SY: Besides co-writing and co-starring in ‘The Mule’ with Angus, he also made his feature film directorial debut on the film, and co-helmed it with Tony Mahony. What was the process of working with Angus as a director on the film?

LW: It was good. Angus was so proud of, and happy with, the script, he wanted to have a level of control on it. We didn’t want to see a director come in and take over the whole thing, and change everything. Things on films change all the time, as they’re a collaborative art form. There are many, many cooks in the kitchen, as one guy can’t make the whole meal.

But I think Angus was keen on having some level of control of the script. So he decided to co-direct with Tony Mahony, who did a great job. It was very collaborative, and was definitely raised by a village. It wasn’t a one-man vision; it was a collaborative process. A lot of people say that, but this really was a film that was raised by a village.

Angus was just one voice; there were many other voices. Even the other actors, like Hugo Weaving, who’s obviously a veteran, were contributing their thoughts. If Hugo had an idea, we would take it on board. If you look at what he did with his character, he made it so much better than it was on paper. He really brought that character to life.

Angus did the same. He had a tough job-he played the lead role, and also produced the film. It was back-breaking, and I worried about his health for awhile. But he pulled it off, and I’m really happy with the end product.

SY: Speaking of the fact that Angus also produced ‘The Mule,’ you also served as an executive producer on the thriller. Why did you also produce the thriller? Did working as a producer influence the way you approached your role in the film, and vice versa?

LW: Well, I never like to get involved with the administrative side of filmmaking; the number-crunching side bores me to tears. I don’t know how anybody does it, including producing and line producing. I purely like the creative stuff; I love writing scripts, and then act and bring the stories to life. So I really stayed out of the day-to-day producing, and instead really focused on the acting.

When the film was shooting, I wasn’t really thinking about how it was going to be sold, and how much people were being paid. I ignored all the behind-the-scenes red tape of filmmaking, and instead purely focused on the role of Gavin. I wanted to know how this guy walked, how this guy lived and who he was. It was fun to give myself over completely to a character.

SY: What was the process of filming ‘The Mule’ independently on location in your native Australia, where the story’s set, overall?

LW: It was fantastic to go back to Australia. Melbourne, as a city, is in my blood, and is part of my DNA. I feel like I know every street and every crack in the sidewalk. It’s just a part of me. As much as I love Los Angeles, Melbourne is really my home, and always will be. It’s always great to go back to Melbourne, and not just to pass through and say hi, but to actually live there again for months. I treasured that experience, and ‘The Mule’ was one of the most fun shoots I’ve ever been on.

SY: While you mainly interact with Angus in many of your scenes, what was the process of working with your other co-stars on the film, including Hugo, who you mentioned earlier, and John Noble?

LW: Well, the rest of the cast was amazing; it was like going to the best acting school in the world. We had such people as Hugo Weaving, John Noble, Geoff Morrell and Noni Hazlehurst, and they’re legendary Australian actors. They’re very well-known and respected in Australia. They’ve done everything from films to television to theater, and they’ve been around for a long time. They’re just great actors.

You don’t even see how good they are until you get into the editing room, and see exactly what they were doing up close on a screen. The smallest nuances even count, and aren’t wasted with them. Every crinkle of their eyebrows and every breath contributes to the character; absolutely nothing is wasted. You almost don’t catch that when you’re on the set, as you’re too far away from them. But when you actually look at their faces in a close-up on a screen, you realize what they’ve done. It’s a whole other level of skill, so it was brilliant to watch them work. I learned a lot from them. I’m not sure if I can take anything away from those lessons as an actor myself, but I certainly learned a lot about screen acting from them. 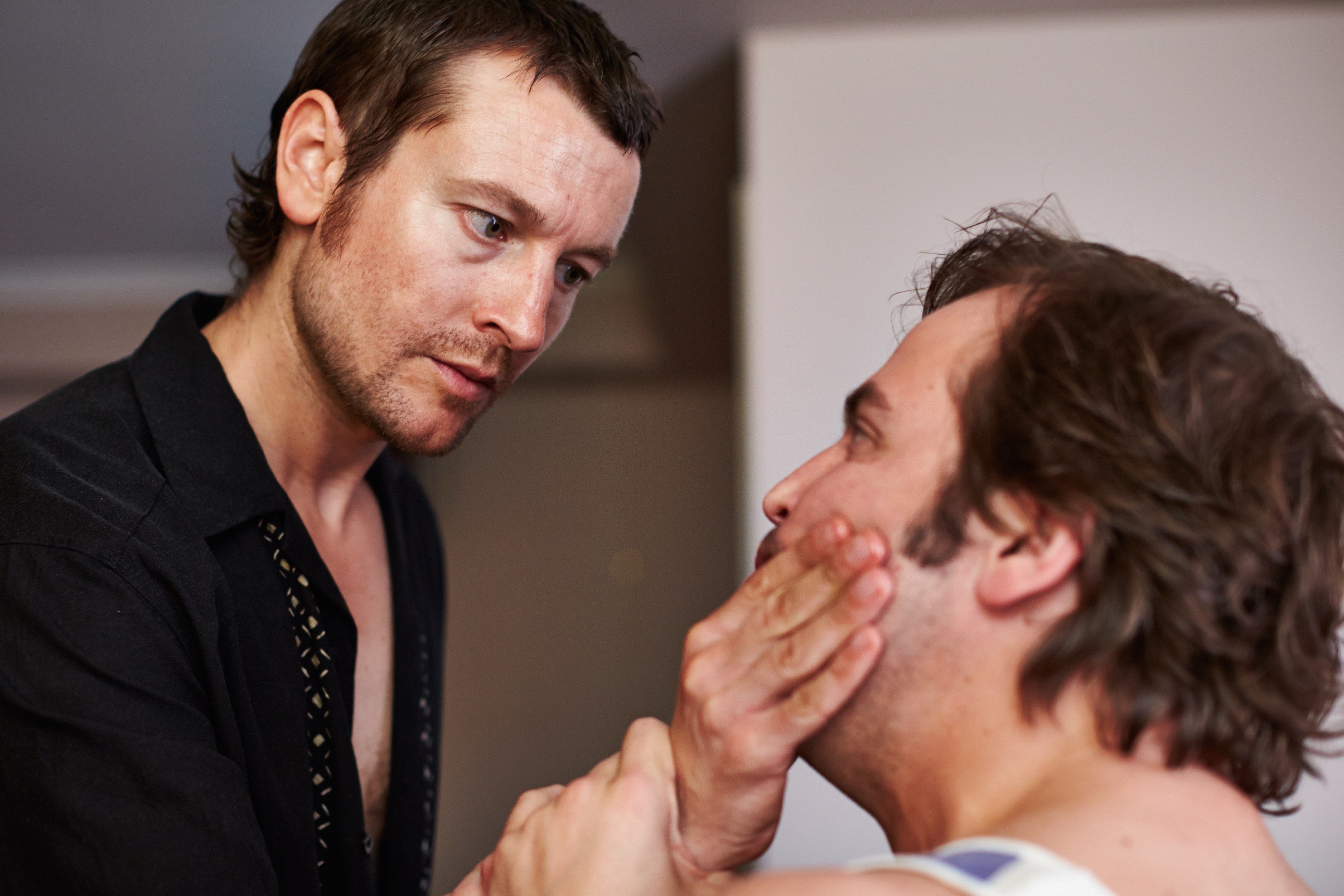