Engaging in numerous and versatile attempts to emulate the success of respected professionals in your field, as you try to achieve your own accomplishments in your newly launched career, is a major key element in prevailing in your job. But following in their triumphs can also help in protecting your life in dire situations. The protagonist in Greg Francis’ feature film writing and directorial debuts, the action crime thriller, ‘Poker Night,’ creatively and determinately relied on the powerful advice he garnered from his new colleagues. He utilized their guidance in his unwavering attempt to save not only his job, but also his life, during a challenging and crucial life-altering and defining event.

‘Poker Night’ follows a rookie police officer, Stan Jeter (Beau Mirchoff), who was recently promoted to detective in Warsaw, Indiana, after he solved a high-profile case by sheer coincidence and pure luck. To help initiate him into his new job, several veteran detectives, including Calabrese (Ron Perlman), Bernard (Giancarlo Esposito), Davis (Corey Large), Maxwell (Titus Welliver) and Cunningham (Ron Eldard), invite him to take part in their title ritual they hold for all newly promoted investigators. To help Jeter ease into his new position, they reveal their most daunting cases of their careers, which the he integrates himself into in order to better understand how they solved their prolific investigations.

The poker game and the remembrances of the veteran detectives’ cases are integrated into the thriller’s main plot as flashbacks. Immediately after Jeter leaves the game, he answers a domestic-dispute call, and when he arrives on the scene, he’s abducted by an unidentified masked assailant (Michael Eklund). Jeter then wakes up bound to a chair in a basement, where a television is set on a news program that informs the detective he’s been missing for three days.

Jeter also discovers that Amy (Halston Sage), Maxwell’s underage daughter, who has been hoping to start a romantic relationship with Jeter, is also being held hostage. In order to find a way to escape, the investigator relies on the stories his fellow detectives told him during their poker game. To save their lives, Jeter must find a way to understand their abductor’s history and motivations, which is unveiled during further flashbacks, which allude to child rape and murder. The new detective is willing to take any means necessary in order to survive and be able to pass his own daunting case to the next rookie officer during the force’s next poker game imitation.

The award-winning Francis, who has garnered acclaim for his writing and directorial television efforts for the past 20 years, crafted a clever and enthralling abduction story that powerfully infuses both Jeter and his captor’s motivations and backstories into their rationale during the detective’s kidnapping. Instead of focusing on the predictable formula of abduction thrillers that provide no insight into the main characters’ mindsets as they fight for survival and redemption, the ‘Poker Night’ filmmaker enthralling found a plausible reason to incorporate flashbacks into the story, which is often an unnecessary plot element that slows down a story’s development. Jeter’s determination to remember the details of his fellow detectives’ survival in the stories they told him from their distinct careers, which gave him the courage to fight for survival against his captor, whose own memories of his painful childhood captivatingly explored his reasoning for abducting innocent victims, grippingly and emotionally balanced the unnerving fight sequences between the two opponents.

The equally intriguing and stimulating insight into both Jeter and his abductor’s emotions and motivations was also partly explored by the inventive costume design by Beverley Huynh. With the majority of ‘Poker Night’ being told over the course of a couple weeks, starting with the detective’s poker game and continuing with his prolonged imprisonment in his kidnapper’s basement, Jeter was forced to contend with living in decrepit conditions, which Huynh smartly reflected on his lone outfit. While the detective’s pants and shirt appeared polished during his poker game with his fellow officers, the longer he was trapped in his abductor’s basement, the grittier and bloodier they appeared, which powerfully emphasized his deteriorating fate.

Jeter’s captor, however, embodied a more refined and sophisticated look through the startling evolution of the unsettling action crime thriller’s plot. The kidnapper often sported sophisticated business attire when interacting with the detective, suggesting that he may appear to be an upstanding citizen as he infiltrates Warsaw society, as a way to cast suspicion off of his devious activities. But the most revealing aspect of the abductor’s appearance is the subtle, yet equally terrifying, mask he wore whenever he interacted with Jeter, in an effort to hide his identity. The chilling disguise, which only featured openings for the antagonist’s eyes, nose and mouth, which included unsettling stiches that disturbingly moved when he spoke, creatively emphasized the fact that he knew his actions were depraved and vicious.

‘Poker Night’ inventively proves Francis’ inventive and unique ability to create an intriguing thriller that doesn’t solely focus on the high-stakes stunt sequences that usually drive the action in crime films; the movie also smartly integrates the emotional motivations of both the victim and criminal, and their determination to do whatever it takes to protect themselves. The writer-director innovatively mixed Jeter’s recollection of his fellow detectives’ survival in their daring stories to find the courage to fight for survival against his captor, whose recollections of his painful childhood entrancingly revealed his reasoning for abducting innocent victims. Combined with Huynh’s inventive costumes for both main characters, which perfectly captured their presumed perspective fates in the abduction, the movie offers a welcomed new insight into the action crime thriller genre.

Technical: B+
Acting: B
Story: B
Overall: B 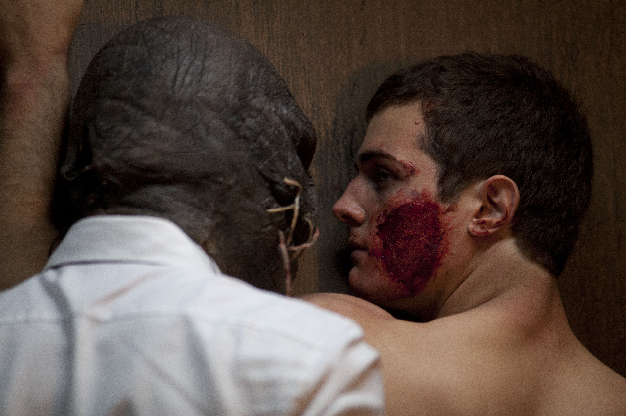