Marvel has released a new photo in promotion of the studio’s upcoming Netflix series Daredevil starring Boardwalk Empire’s Charlie Cox. The image shows Cox in the title role of blind lawyer Matt Murdock blending in with the crowd as a regular citizen while he guides himself down the street of the busy city dressed in his business attire. By night however, Murdoch becomes the avenging Daredevil who fights evil and crime in New York’s Hell’s Kitchen with skill and his heightened senses. Actors Vincent D’Onofrio, Deborah Ann Woll, and Elden Henson will also star opposite Cox in the reimaging.

The series is slated to play out in a 13-episode season on Netflix. Creator Steven S DeKnight teased the series, stating that it will have a “gritty” take with a “1970s New York feel”.

“We love the idea of beauty in the decay of the city and Hell’s Kitchen being a place that is both horrible and beautiful at the same time, and that’s why Matt Murdock loves it so much and wants to protect it,” DeKnight said.

Adding in another conversation that he is “not looking to push it to extreme violence or gratuitous nudity,” with Daredevil, even if Netflix allows its TV series the ability. Daredevil has wrapped filming (according to a tweet by DeKnight) and will be released on Netflix in May. Check out the new photo and let us know what you think. Will you be tuning in to the series? 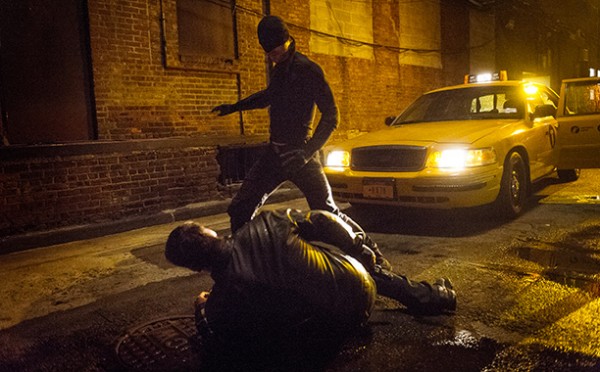