Testing the boundaries of your seemingly loving relationships with the most important people in your life, from your parents to your long-term significant other, can be a revealing insight into how strongly you trust them and believe in their commitment to protecting your well-being. That enticing process of engaging in seemingly dangerous situations is captivatingly showcased in director Justin Lerner’s second feature film directorial effort, ‘The Automatic Hate,’ the follow-up to his debut movie, the 2010 drama, ‘Girlfriend.’ The helmer, who co-wrote the script to his latest film with Katharine O’Brien, grippingly cast actor Joseph Cross to portray a seemingly successful young man who willingly put his connections with his parents and girlfriend at risk. In his erratic decision to prove he has the right to know all the secrets that have purposefully been kept hidden from him, he not only brought up old tensions that strained the relationships in his entire family, but also threatened the love he was so determined to maintain with his girlfriend.

‘The Automatic Hate’ follows Davis Green (Cross), a chef working in a Boston restaurant who’s determined to rebuild his relationship with his girlfriend of two years, Cassie (Deborah Ann Woll), after she had an abortion. After seeing a mysterious young woman wave to him and one of his friends while they were at the restaurant under the apartment he shares with Cassie, Davis approaches her, but she quickly runs away. Later that night, he sees her again through one of the windows of his apartment, and decides to try to speak with her once more. This time the woman, Alexis (Adelaide Clemens), claims they’re first cousins, as their fathers are brothers. After learning of his existence, she tracked him down, despite not telling her parents of her intentions to meet him.

At first, Davis denies Alexis’ claims, as he insistently tells her that his father’s an only child. But her assertion leads him to begin to ponder the past of his father, Ronald (Richard Schiff), who’s a professor and psychiatrist who specializes in such areas as nature vs. nurture and family relationships. After discovering that his father has kept the fact that he really does have a brother, Josh (Ricky Jay), who he has kept hidden for thirty years, Davis decides to go against Ronald’s wishes. He travels to rural Upstate New York to meet his uncle and two other cousins, Annie (Yvonne Zima) and Amanda (Vanessa Zima), on the pig farm they live on and operate.

After Davis quickly develops a strong connection with his long-lost relatives, he sets out with Alexis to reunite their broken family. But in getting to know each other, Davis and Alexis realize they are perhaps more like their own fathers than they thought. As the pair uncovers the incident that tore their family apart, the two cousins must resist the temptation to keep their fathers’ deep-rooted grudge going, rather than end it.

While in Austin, Texas this week for ‘The Automatic Hate’s World Premiere during SXSW’s Narrative Spotlight Section, Lerner, O’Brien and Cross generously took the time to talk about making the independent drama during an exclusive phone interview. The filmmakers and actor discussed collaborating on the script together to bring the characters to life; the complexity, confusion and struggle Davis contended with after the revelation of the family his father and uncle kept hidden from him and his cousins, and how the brothers’ heartbreaking secret dramatically changed everyone’s lives; and how Lerner was drawn to cast Cross, Clemens and the supporting actors in their respective roles after he met with them and discussed their characters.

ShockYa (SY): Justin and Katharine, you co-wrote the script for ‘The Automatic Hate’ together. How did you develop your writing partnership, and what was the process of collaborating together on the script once you began writing?

Katharine O’Brien (KO’B): Well, Justin and I started talking about scripts, and we realized we had a lot in common when it comes to our tastes in films. The great thing about working with someone is that you can move a lot faster. We got the ideas about this family down really fast.

SY: Justin, besides co-writing the script with Katharine, you also directed the drama. How did working on the screenplay influence your directorial approach once you began filming?

Justin Lerner (JL): Well, I’ve only directed scripts I have written. That process not only helps you find the right actors for each role, but also easily lets you make any last-minute changes on the set. But I also let the words in the script inform the actors, which helps them bring their characters to life. Having the freedom to work with the actors on the script also allows me to start editing the film while we’re still on the set.

SY: Joseph, you play Davis Green, the main character in ‘The Automatic Hate,’ who becomes interested in getting to know his extended family he never knew about after unexpectedly meeting his cousin, Alexis. What was it about the character of Davis, as well as Justin and Katharine’s script, that convinced you to take on the role?

Joseph Cross (JC): I loved the script, and thought it featured a rich approach to the world Justin and Katharine had created. I also thought Davis had a lot of depth and complexity, as well as confusion and struggle within himself. I was also excited about the idea of working with Adelaide.

SY: Justin, what was the overall casting process like for the film-how did you find the rest of the actors for the supporting cast?

JL: Joe came in and read, as I was out scouting the country for a barn to shoot on. Then we had a meeting, during which I realized he was the guy for the job, as did everyone else on the team.

The same thing happened with Adelaide, who we found through tape. Alix Madigan, who produced this film, as well as ‘Winter’s Bone,’ told us how she found Jennifer Lawrence through tape, when another actress didn’t work out for that movie. As soon as everyone saw Adelaide’s tape, not only did she get cast, but we also were able to raise more money.

Alix had a relationship with Deborah Ann Woll, so we cast her based on that connection, as well as all of us knowing her work. So we wanted to work with her, and ended us casting her after a couple of meetings.

I wrote a letter to Ricky Jay after we tracked down his manager for about a month. In the letter, I told him how big of a fan I am of his work, and how I always had him in mind for the role. I also told him how we’re similiar. I mentioned how my father’s from Brooklyn, that I’m Jewish and I went to Cornell. Ricky’s a Jewish guy from Brooklyn who also went to Cornell.

I offered him the role of the hippie pig farmer, a character he hasn’t been offered or played before, as he usually plays gangsters and magicians. So I think he was intrigued, and I gave him a hard sell at our meeting. We also offered Richard Schiff the role of Ricky’s younger brother, and he really responded to the material.

Two real-life sisters, Yvonne and Vanessa Zima, played the sisters of Adelaide’s character. I had met with Yvonne, and knew Vanessa socially, and was very taken with them in our meeting. So I thought they would be great older sisters for Adelaide, not just because of the physical likenesses; I was also drawn to their rambunctious and carefree attitudes, which the characters needed. Putting together a family for a film is always hard when you’re casting, but we lucked out with this one. 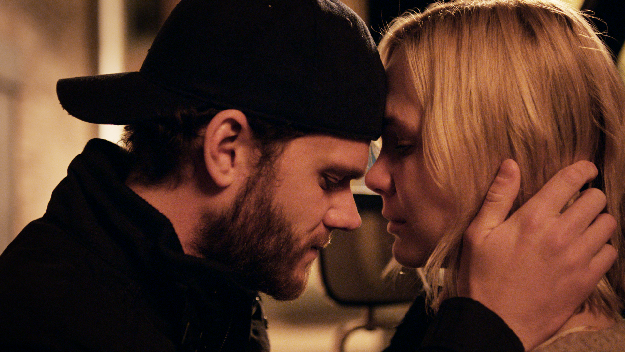