Scenes of a rebellion to liberate a Chinese village from its oppressive overlord are captivatingly interlaced with praise for filmmaker Roel Reiné in Shockya’s new exclusive clip for the newly released action film, ‘The Man with the Iron Fists 2.’ The director’s noteworthy chronicling of the uprising is being led by a mysterious stranger in the sequel to the 2012 martial arts movie, ‘The Man with the Iron Fists.’

Available now on Digital, Blu-ray and DVD from Universal Pictures Home Entertainment, ‘The Man with the Iron Fists 2’ sees the return of hip-hop artist RZA, who reprises his role as the enigmatic blacksmith Thaddeus. The performer, who also co-wrote the script for the original film, returned to co-pen the follow-up with ‘Romeo Must Die’ scribe, John Jarrell. Reiné took over the series directorial duties from RZA, who also helmed ‘The Man with the Iron Fists.’ Besides the Wu-Tang Clan member, the sequel also stars Dustin Nguyen, Cary-Hiroyuki Tagawa, Eugenia Yuan, Pim Bubear, Simon Yin and Carl Ng.

Shockya’s exclusive clip begins with Ng on the set, praising Reiné’s work with a camera, which is intercut with images of the director on the set, filming different scenes of the action sequel. RZA then also applauds the helmer, particularly for his combined effort as the movie’s cinematographer.

Yuan, who portrays Ah Ni in the movie, also revealed her appreciation for Reiné’s dedication to personally following the performers with the camera on the set. Sahajak Boonthanakit, who played Bolo in the film, also noted the filmmaker’s non-stop dedication. The actor revealed how the director was determined to complete more scenes than were originally scheduled everyday. One of the movie’s co-producers, Chris Lowenstein, also highlighted the helmer’s devotion to the film; he revealed that Reiné averaged 110 set-ups a day, while most movies average 12-24 set-ups.

Universal Pictures Home Entertainment has released the following synopsis for ‘The Man with the Iron Fists 2’:

When Thaddeus (RZA) is found badly wounded near a 19th-century Chinese town, miner Li Kung (Dustin Nguyen) and his wife Ah Ni (Eugenia Yuan) offer him refuge. As he heals, he becomes entrenched in a conflict that pits the townsfolk against the evil Master Ho (Carl Ng), his nefarious Beetle Clan and the terrifying Lord Pi (Cary-Hiroyuki Tagawa). With Thaddeus at his side, the mild-mannered Kung transforms into a deadly warrior in this martial arts epic.

The Blu-ray and DVD for ‘The Man with the Iron Fists 2,’ which is inspired by classic kung-fu films, include the following bonus material: Deleted Scenes; ‘Chi Warriors: The Making of Man With the Iron Fists 2,’ a behind-the-scenes featurette that looks at the making of the film with the cast and crew, including Reiné and RZA; and feature commentary with the director and co-writer-actor.

Watch Shockya’s exclusive clip for ‘The Man with the Iron Fists 2’ below: 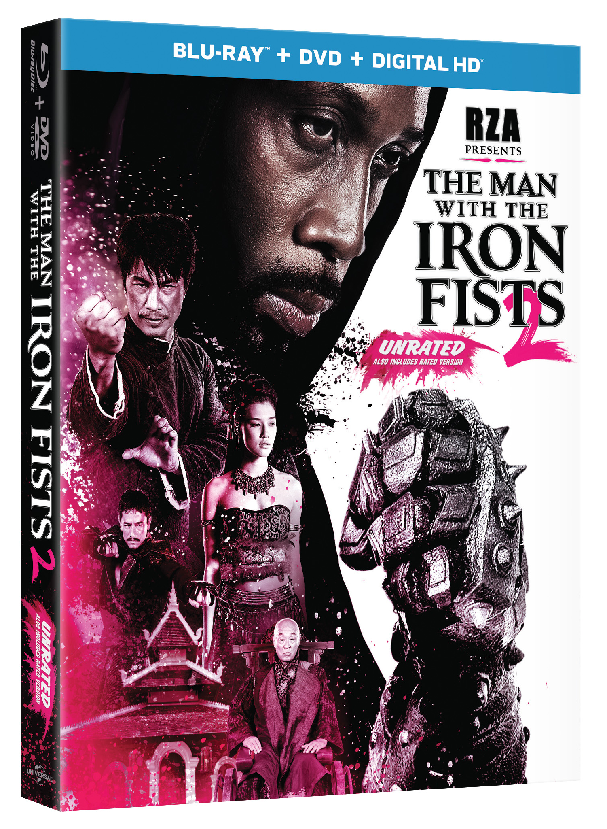