Endearingly encouraging your adolescent child to fearlessly explore their true identities, without harboring any concerns over how their personality will be perceived by their peers and community, can be a daunting experience. But supportive mother Maggie Cooper is so determined to remain close to her only son as he prepares to leave for college, that she’ll do whatever it takes to prove she’s supportive of his authentic personality in the upcoming independent comedy, ‘Helicopter Mom.’ Actress Nia Vardalos powerfully plays the at-times overbearing, but well-meaning, mother in director Salomé Breziner’s latest film, which is set to be released in theaters and on VOD next Friday, April 24.

‘Helicopter Mom’ follows the financially pressed single mom Maggie, who begins to question the sexual orientation of her teenage son, Lloyd (Jason Dolley), who hasn’t pursued a romantic relationship throughout his time in high school. In his free time, he enjoys writing poetry, which he’s too sensitive about to show one of the girls in his English class, popular cheerleader Carrie (Skyler Samuels), who expresses interest in him. Combined with the fact that he only has one close male friend in school, Maggie decides her son is gay, but is too afraid to openly admit it.

While Lloyd has told his mother that he’s confused about his sexual orientation, and he finds himself attracted to both boys and girls, Maggie’s determined to set him up with various potential boys his age who she finds to be acceptable. She shows no boundaries in trying to help her son, even at the discouragement from her ex-husband, Max (Mark Boone Junior), who’s determinedly trying to reconnect with Lloyd before he begins college.

As Maggie’s attempts to protect Lloyd become more desperate, she even submits an application for him for a gay student college scholarship. While he begrudgingly agrees to go along with her plan, as he’s determined to obtain financial aid to attend college, he becomes increasingly annoyed with his mother’s endless manipulations. Resolute to find his own sense of identity without her input or influence, Lloyd takes the initiative to ask the person he wants to spend time with to the prom, much to her dismay that he’s going against her plan. In the process of standing up for himself not only against his mother, but also the people at his school who have formed their own opinions about him, Lloyd finally discovers who he truly is, and the person he wants to become.

Vardalos generously took the time recently to talk about filming ‘Helicopter Mom’ during an exclusive interview over the phone. Among other things, the actress discussed how she was drawn to play Maggie, as she was interested in working with Breziner, who offered her and her co-stars the freedom to improvise with each other, and fully explore the evolution of parents’ relationships with their children; and how Breziner’s direction of the comedy not only proved the importance of having women filmmakers make meaningful movies about important life issues and relationships, but also how essential it is for teens like Lloyd to be completely comfortable in openly exploring their sexualities and identities.

ShockYa (SY): You play Maggie Cooper in the new comedy, ‘Helicopter Mom.’ What was it about the character, as well as the script and the movie overall, that convinced you to take on the role?

Nia Vardalos (NV): Well, I wanted to work with Salomé, because she’s a female director. She also told me that she had rewritten the script, but she wanted us to have fun and improvise while we were filming. That really attracted me, because my background is in improv with (the improvisational comedy troupe) Second City.

SY: Speaking of improvising, what was the process of working in the moment with your co-stars on the set of this film, particularly since it’s a comedy that features an important message about family? Did that process help create the bond between you and the other actors on the set?

NV: It does create a bond, because it involves a trust that you’re not going to go to a strange place, and that you’re going to stay in your character. At the same time, improvising allows you to be loose and free. Salomé created a very trusting environment for us to improvise while we were filming.

SY: While Salomé did encourage you and your co-stars to improvise while you were shooting the movie, where you also able to have any rehearsal time with your co-stars before you arrived on the set, to also help build your working relationships?

NV: Well, the movie was shot over a short period of time, with a wonderful Director of Photography (Chris Squires). He was able to light the set with natural light, and really move quickly through things. We didn’t have any rehearsal time together whatsoever; we didn’t even have dressing rooms or trailers. We were all changing in one room of a house, and using the same bathroom.

SY: Speaking of the fast shooting schedule, and the fact that ‘Helicopter Mom’ was shot independently overall, how does that process benefit the on-screen relationship between your character and her son, as well as the overall filming process?

NV: I love making independent films. There, of course, isn’t any money, but I love the autonomy that it brings to the filming process.

SY: How did having a female director like Salomé on the film, which so strongly focuses on Maggie and her relationships, particularly her bond with Lloyd, influence the process of making it overall? How important is it to you to work with female directors, as well as writers, on your projects?

NV: I love men; I’m married to a man, and love my dad and my brother, and I work very well with men. But I also love working with women, and I feel the need to write for them. For the sequel to ‘My Big Fat Greek Wedding,’ I over-wrote for the women, because we’re always left behind. I find that I’m always writing “Police officer named Diane,” because I know otherwise the casting director will cast a man.

So I’m annoyed by the current situations for females, so the only thing I can do is speak out about it, and continue to write. I’m not sexist about it; I hire the best person for the job. But I’m constantly asking, “Can we hire a female costumer, make-up artist and assistant director?” I’m trying as often as possible to point out that we should look at women. Luckily, I don’t work with sexist people, and they do bring in as many women as possible.

SY: Over the course of the film, Maggie struggles with her relationship with Lloyd, and how they’re drifting apart, especially since he’s trying to figure out his life as he’s preparing for college. How important do you feel it is to showcase that exploration into the change parents and children see in their relationships as the teens are preparing for adulthood?

NV: I think everyone struggles with boundaries, and that’s not a bad thing. I think making mistakes is good, because obviously we learn from them. You just don’t know where the line is until you cross it.

SY: What do you hope parents and their children can relate to while they’re watching the film? What do you hope audiences can take away from it overall, since the story primarily focuses on mothers trying to truly understand their teens?

NV: I think an underlying theme that attracted me to the film is that every child deserves to live an authentic life. We have a very serious situation now with children feeling like they can’t come out, particularly if they’re being bullied. Teens should also feel authentic enough to live as a transgender person, if that’s how they identify. But if they feel that’s not possible, they’re committing suicide. I know that’s taking us to a darker place, but it’s a really serious issue. As a parent, I hope that my daughter lives her authentic life. I will support whatever she hopes to be.

NV: Yes, and Jason played it so well. He really knows what he’s doing, and is such a professional. He’s a wonderful person, and I kept saying to him, “I know you have great parents.” He’s just a great kid.

SY: ‘Helicopter Mm’ is being released in select theaters and on VOD next Friday, April 24. Are you a fan of watching films like this one On Demand, and why do you think the platform is a beneficial way to release indies?

NV: Yes, I’m actually hoping that it happens more often. Theater owners need to be aware that there are parents out there who can’t afford to hire a babysitter, and shouldn’t have to, just to get out there to see entertainment. I think, and am hopeful, that day-and-date releases for all films are in our future.

SY: Besides working as an actress, you have written and directed several films, including ‘My Big Fat Greek Wedding,’ which you mentioned earlier. Are you interested in writing and directing again in the future? Why do you think it’s important that Hollywood also has women filmmakers?

I mentor women and men screenwriters, and my goal is to get these women out there, and have their films made. I am open to personally writing again, but my first love is acting. If I could just do that, I’d be happy.

SY: Besides ‘Helicopter Mom,’ do you have any other projects lined up that you can discuss?

NV: Well, with Mother’s Day coming up, I wanted to give a little plug to my book, which is called ‘Instant Mom.’ It’s available wherever books are sold. I donate all the proceeds to get children adopted. It’s about how it took me 10 years to become a mother overnight. 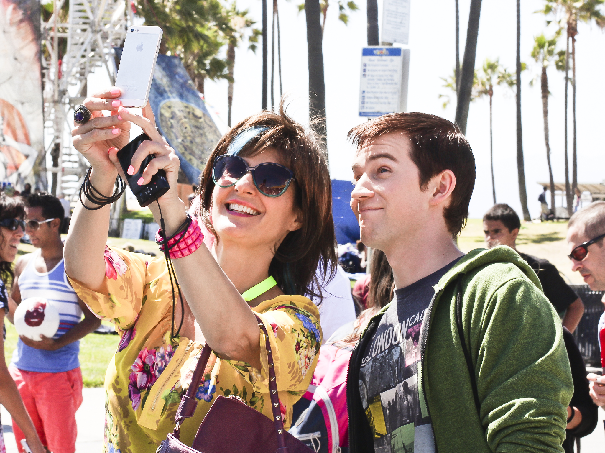