The first comedy club to feature holograms of late acclaimed comedians in order to entertain audiences is currently in development, Hologram USA and the National Comedy Center (NCC) in Jamestown, New York have just announced. The unique show will be featured at the Lucy and Desi Arnez Comedy Museum, which breaks ground in August.

Hologram USA, which is run by CEO Alki Dvid, will work with the estates of the late comedians that it will feature in the upcoming act, including Andy Kaufman, George Carlin, Rodney Dangerfield, Richard Pryor and Joan Rivers. The holograms will be featured in the classic comedy club atmosphere the comics built their careers in.

“Of all the amazing things we’ve done with hologram technology, this is one of the most exciting ones,” David was quoted as saying when the news was announced on TVMix. “As a permanent home for this advanced form of entertainment, the NCC couldn’t be better. I can’t think of a better way to experience America’s comedy greats than in the live setting they thrived in at their peaks.”

David began working on the project with the comedy center, as they agreed that featuring holograms in a club would offer a more personal experience for audiences than watching old videos or listening to albums. The Hologram USA CEO hopes to make the experience as real as possible for fans of the comedians.

Of the upcoming shows, Journey Gunderson, NCC’s executive director, was reported as saying in Newsweek that “We think it’ll be an important experience to feel what it would’ve been like to sit in the audience at these iconic performances. It will be more like the intimacy of some of the greatest comedy clubs.” Of the comedy center, which is expected to open in August 2016, she added that “It’ll be a small space that seats about 60 people. Some of the greatest comedy performances happen on stages in intimate basement clubs and small venues. That’s the feel we are re-creating.”

While some of Hologram USA’s experiences are prerecorded, the company may work with real actors on the comedy show at NCC. The actors would direct the holograms for comedic timing, based on the audiences’ interactions and perceptions. Each show will be a unique experience to its viewers’ likes and preferences.

The comedians’ sets will utilize existing audio recordings. Their estates and families will also pick the outfits the performers will wear in the holograms. But “If a sponsor wants to work with us to integrate a product into the show, and they are critical to drive the economics of this, then we will incorporate a sponsor-based design,” David added.

If people interested in seeing the show are unable to visit NCC in Jamestown, Hologram USA is working on offering a pay-per-view program. “We are working on a special that will include all of the comedy greats, and it’ll also include several living legends as well,” David said.

The goal of NCC is to honor and celebrate comedy and its contributors across all time lines and media types with its interactive and personally-customized exhibit experience. It will also celebrate the best of contemporary comedy with its year-round programming and provide support for new and up-and-coming artists through professional development and educational opportunities. The center will emphasize the vision that Lucille Ball had for her hometown of Jamestown, which was that her legacy be celebrated in the form of living comedy. 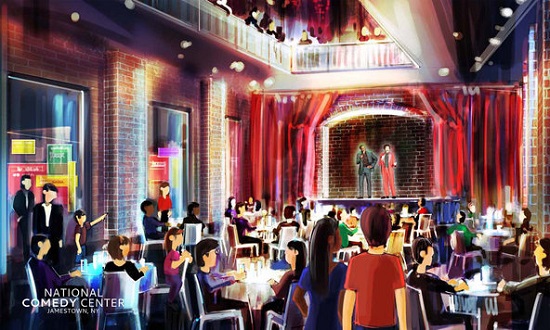