How can kids be optimistic about the future when so many movies that they see and books that they read are full of gloom and doom?  Think of the classic novels: In “1984” big brother takes over as he does in “Fahrenheit 451.”  At least there are ways to escape from the clutches of an overeager Homeland Security, the most spiritual departure being the colony of young bibliophiles in “Fahrenheit 451” who memorize books.  But the future looks terrible in “Logan’s Run,” where people over 30 evaporate.  Colliding worlds, huge monsters, British children raised to have their limbs harvested, an invasion by pod people, and a fascist future where feeling is illegal—all these dire works of cinema and literature make the next decade or millennia look almost as bad as the twentieth century.

Leave to Disney, however, to counteract visions of dystopia. In “Tomorrowland” we get the not-entirely-original message that the young are the future of the world, but not all young—only those who are prodigies, who are extra smart, who are able to do verbal battle with equally smart adults and come out victorious.  And these use not only their brains, but destroy robots by swinging bats and turning off their transmitters.  With all this spirituality, nothing is left to the imagination.  Perhaps “Tomorrowland” would do better on the printed page, where the readers design their own productions—and in fact one of the signs that pass by quickly in this movie, “Imagination if more important than knowledge,” is belied by the way director Brad Bird shows us every detail he wants us to see, actually bombarding the screen with robotic nuts and lightning bolts, and jet packs that whiz inventive youth into the sky or leave them floundering to bounce on the ground like a pebble skimming that surface of a lake.

The idea that in a world facing war on every continent, climate changes that race nuclear weapons for which will destroy us first, it’s not too late.  But adults will not be there for us.  It’s all up to the youth.

And the youth in scripters Damon Lindelof and director Brad Bird are Casey (Brittany Robertson), a bright woman in her early twenties who lives with her engineer dad; Athena (Raffey Cassidy), a freckle-faced robot who appears in the 1964 World’s Fair and in the present year without aging; and young Frank Walker (Thomas Robinson), who bonds with Athena and at the age of ten or so has invented a jet pack which would be great if it worked.  By contract, the principal adult, Frank (George Clooney) is a burnt-out scientist  who has isolated himself in a farmhouse (the picture was shot mostly in British Columbia); and a judge, David Nix (Hugh Laurie), appropriately named as he nixes young Frank Walker’s jet pack in a World’s Fair competition as did Frank’s own father.

When Casey, who lives in Cape Canaveral, receives a mysterious pin with the letter “T,” she touches it and is transported instantly to a large wheat field, a move that strikes her as awesome.  In one great shot, she is riding a monorail, touches the “T” and continues her ride with nothing under her through the wheat field.  When Athena, the aforementioned robot, talks Casey into visiting Frank, the movie turns thematically into a debate between a cynic who sees only impending doom and an optimist who envisions a bright future.

There is no question that considerable money was spent in the awe-inspiring production design, featuring good and bad robots (the latter equipped with large weapon that can zap anything its beams touch).  And in her breakout performance, Britt Robertson—whom sci-fi fans watched on TV in a Stephen King adaptation of “Under the Dome” until she gets killed off—convincingly runs through the gamut of emotions from disgust to confusion to delirious optimism.  But special effects aside—they’re incredible but actually take away from the spirituality of the movie—the story is clumsily told, the message obvious and clichéd, all full of sound and fury signifying little. 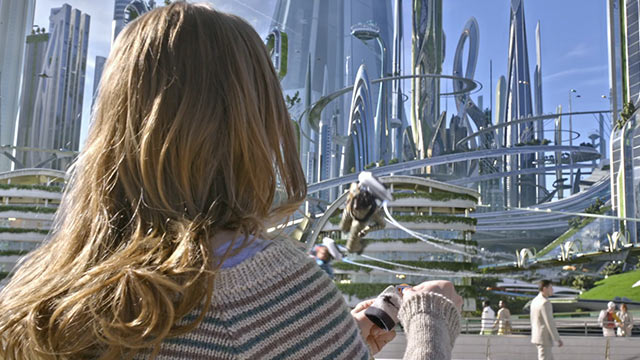