Dean Cain is determinedly set on capturing a new side of himself in Shockya’s exclusive new clip, ‘Hunting Trip,’ from his upcoming action drama, ‘Vendetta.’ The video showcases the actor as he portrays a detective who’s pushed so beyond his limits that he will stop at nothing to achieve his vengeance.

‘Hunting Trip’ follows Cain’s character, Mason Danvers, as he stoically sits outside with Joel Gainer (Ben Hollingsworth), who reassures him he did the right thing, and there was nothing else he could have done. As the detective pensively looks at his friend during his heartfelt consolation, he agrees that he should leave town, in an effort to clear his mind. Mason tells Joel that he’s going to go on a hunting trip.

The detective is then shown loading his gun, before he gets into his car and begins traveling around Chicago. Mason drives down deserted streets throughout the city, as he hunts for his way to fulfill his revenge.

‘Vendetta,’ which was written by Justin Shady, reunites directors Jen and Sylvia Soska with production company WWE Studios and distributor Lionsgate. Besides Cain and Hollingsworth, the film also stars Paul Wright, who’s better known by his WWE stage name, Big Show, and Matthew MacCaull. Actor Michael Eklund, who’s a frequent collaborator of the twin helmers, who are collectively known as The Soska Sisters, also appears in the action drama.

The following synopsis for ‘Vendetta,’ which will be released in theaters and On Demand on June 12, has been released by Lionsgate and WWE Studios:

Dean Cain and WWE Superstar The Big Show star in ‘Vendetta,’ an action-packed thriller about a detective pushed beyond his limits who will stop at nothing for vengeance. When his wife is killed by a criminal that he put away, Mason (Cain), a hard-nosed detective, deliberately gets arrested in order to get revenge. While inside, Mason discovers a new criminal enterprise that those behind it would kill to protect. 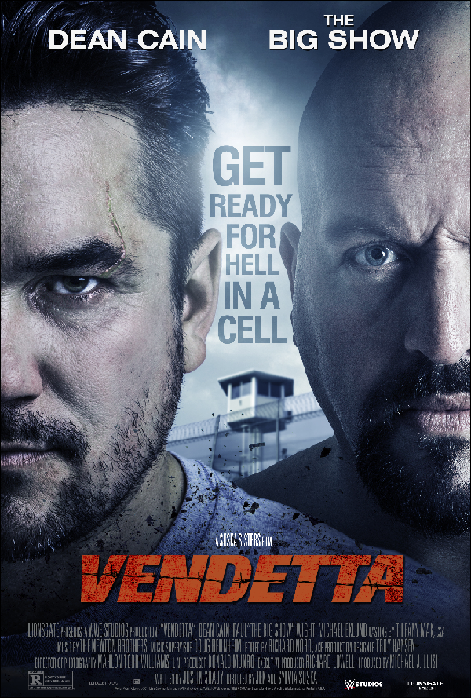