The process of moving on from a painful separation can often be a daunting task that people often have difficulty with, as they naturally and uncontrollably sentimentalize the seemingly better parts of their relationship. Even when they eventually accept the fact they have to move on and form more positive and meaningful connections, burying the past can still prove to be a challenge. That internal struggle is enthrallingly presented in Anton Yelchin‘s relatable protagonist, Max, as he tries move on from his romantic relationship in the new horror comedy, ‘Burying the Ex.’ The independent movie, which will be released tomorrow in theaters and on VOD and iTunes, and is based on writer Alan Trezza’s 2008 short film of the same name, creatively captures the character’s emotional turmoil. Acclaimed genre director Joe Dante cleverly emphasized Max’s internal pain of trying to end his relationship with his domineering girlfriend, even after she becomes a zombie, to use the undead as a smart metaphor for the universal issue of how some toxic connections won’t remain dead.

‘Burying the Ex’ follows the good-intentioned and naturally nice Max as he strives to make his relationship with his controlling girlfriend, Evelyn (Ashley Greene), more serious. Max, who works as a novelty store clerk, decides to let Evelyn, an environmental activist and blogger, move into his apartment. While he asserts to his slacker half-brother, Travis (Oliver Cooper), that she’s the ideal girlfriend, as she’s beautiful, successful and smart, her manipulative ways soon prove to be his worst nightmare.

Travis insists that his brother end his romantic relationship with Evelyn, as she’s not only ruling and changing his life, but he has also met his dream girl, Olivia (Alexandra Daddario). Since she’s a fellow horror fan, including being the owner of a genre-themed ice cream parlor, Max accepts the fact that she’s a bitter match for him than Evelyn. The only problem is that Max is afraid to end his current relationship, as he fears how Evelyn will react. But when she soon becomes the victim of a fatal freak accident, Max begins to feel guilty over her death, and his decision to end their relationship.

When Max is finally ready to move on with Olivia, who may be his true soul mate, Evelyn unexpectedly comes back to life as a zombie. She’s resolute on rekindling her relationship with Max, even if that means he also has to transform him into one of the undead. But Max is more determined than ever to finally stand up for himself and go after what he wants, including ending his relationship with Evelyn once and for all, so that he can finally be with Olivia.

Yelchin generously took the time recently to talk about portraying Max in ‘Burying the Ex’ during an exclusive phone interview. Among other things, the actor discussed how he was drawn to star in the horror comedy because he was interested in collaborating on a movie with Dante, whose work as a filmmaker he respects, as they pay tribute to the genre; and how there were some challenges in making the film independently, but he liked the process overall, as he collaborated well with the rest of the cast and crew, and enjoyed shooting on location in Los Angeles, as he appreciates being able to film in the actual places the story talks about.

ShockYa (SY): You star as Max, the nice and relatable protagonist who’s hesitant to end his relationship with his at-times overbearing girlfriend, Evelyn, in the horror comedy, ‘Burying the Ex.’ What was it about the character, as well as Alan Trezza’s script, that convinced you to take on the role?

Anton Yelchin (AY): Well, essentially I wanted to work with Joe Dante-that was the main drive for me to star in this film. It feels like such a Joe Dante film in general. I’m an admirer of his movies, and I have a great deal of respect for him, so I wanted to to be a part of one of his projects.

SY: Speaking of the fact that the film was directed by Joe, who’s known for helming ‘Gremlins’ and its sequel, as well as the original ‘The Howling,’ what was the process of collaborating with a filmmaker who has previous experience in the satirical horror comedy genre?

AY: I think Joe’s films are wonderful, because they’re all about the genre. As an admirer of his work, and someone who’s trying to build my knowledge of film history, Joe’s an incredible person to be around.

A lot of the collaborative process with Joe involved me watching classic Hollywood genre films, and then talking to him about them. I was influenced by performances and other elements in those films. Having the opportunity to talk to Joe about those films is something I’m incredibly grateful for-I appreciate his openness to discuss film history with me. I really can’t overstate the value of that to me.

SY: Speaking of classic Hollywood genre films, Max is a dedicated horror fan in ‘Burying the Ex’; besides working at the horror-themed novelty store, he also attends such events as the ‘Night of the Living Dead’ screening at the Hollywood Forever Cemetery with Olivia. Are there any movies or filmmakers that have influenced your life, particularly in becoming an actor?

AY: Well, in the process of making this film, the biggest influence on me was watching Universal horror pictures from the 1930s. Karl Fruend was a cinematographer and director who was a huge part of that world of cinema. So watching films that he (served as the) DP (Director of Photography), such as ‘Murders in the Rue Morgue,’ and directed, like ‘Mad Love’ with Peter Lorre, really influenced me. They gave me an appreciation and love for the grotesque in the genre.

Another big influence on me was Bela Lugosi. I have watched countless of his films and really love him-he’s one of my favorite actors. He was wonderful and poignant because of his commitment.

SY: ‘Burying the Ex’ is a unique zombie film, as Evelyn retains most of her human personality, and the story comically explores how Max is still trying to find a way to end their relationship. What was the process of balancing the story’s comedic elements with Max’s continued disdain for, and fear of, his ex-girlfriend as she further transforms into a typical film zombie?

AY: Well, the script was very funny, so I just played the comedy was already in the story. It was fun to just be able to naturally act in these fun moments that were written.

SY: Max has two completely different relationships with the environmentally conscious Evelyn, who’s played by Ashley Greene, and the more easy-going and his fellow horror fan, Olivia, who’s portrayed by Alexandra Daddario. What were your working relationships like with both Ashley and Alexandra? How did you all work together to build your characters’ backstories and relationships?

AY: We actually didn’t have much rehearsal time at all. We got together and got right into filming. We independently built these characters, and then discussed their relationships, but we didn’t really have time for rehearsals.

SY: ‘Burying the Ex’ features some action and stunt sequences, particularly after Evelyn turns into a zombie. What was the process of filming the physicality aspects of your role of Max, and do you in general enjoy performing stunts?

AY: I do really enjoy that stuff, but I didn’t really separate it from the general aspects of playing the character. The way the characters move and act were really naturally built into how we played them. So my focus was to just keep the character the way he was written. I have done several films that have stunt work, and I always tend to enjoy it.

SY: What was the process of filming the horror comedy independently, as compared to shooting the bigger studio movies you have appeared in? Does filming independently add to the creativity of your character and his relationships?

AY: I don’t really base if I enjoy making films on whether they’re made independently or at a studio. Filmmaking isn’t easy at any budget level, but especially when you don’t have much money, which causes extra challenges. There were a lot of limitations placed on us because of the budget, which made things challenging for Joe. There are pros and cons to everything when you’re making independent films versus studio projects.

SY: What was the process of shooting the horror comedy on location in Los Angeles, where the story’s set, in regards to creating Max, his relationships and the overall plot?

AY: It was incredible to be able to film in Hollywood, as projects tend to not be shot in Los Angeles as much anymore. It’s such a Los Angeles film, and the New Beverly Theater is one of my favorite theaters in the city, so I was really excited that we shot there. I enjoyed being able to film in the actual places we were talking about. I don’t know if you can make this movie anywhere else-it has such a geographic quality to it. The sets and events are very much local to L.A.

SY: ‘Burying the Ex’ is set to be released in theaters and on VOD and iTunes (tomorrow). Are you personally a fan of watching films On Demand? Why do you think the platform is beneficial for smaller independent films like this one?

AY: I watch a lot of DVDs and stream a lot of films. I think right now for independent cinema, the platform is the way things are moving. The cost of distributing films in theaters is tremendous. If you look at the trend in cinema, the films that are being released in theaters that hold the power are the really big studio vehicles. So the smaller vehicles really can’t compete. There are smaller films, like ‘Ex Machina,’ that do suddenly blow up, and that will continue to happen. But for most independent films, people will see them in this streaming format, and that’s just reality. 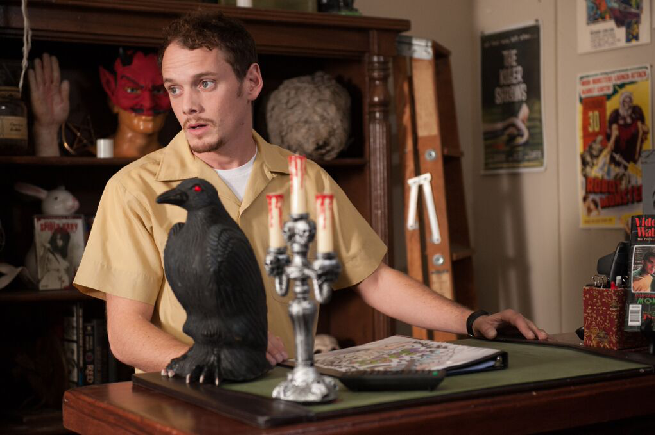