Creating a biopic about famed Hip-Hop group N.W.A. was no easy feat and the incredibly gifted creative team behind Universal’s ‘Straight Outta Compton’ knocked it out of the park. Director F. Gary Gray, producer Ice Cube, actors Jason Mitchell, O’Shea Jackson Jr. and Corey Hawkins talked to press about the work they put into bringing to life the legacy of some of rap’s biggest icons.

F. Gary Gray on the work the actors put in to become N.W.A.:

F.Gary Gray: I don’t want to minimize what these guys did. It was really, really hard. You hear a lot about actors doing a lot to take on a role. I had these guys go to the gym. Some of them lad to lose weight others had to gain weight. We had went through DJ school. These guys recorded Straight Outta Compton. I had them record the entire album. I had these guys do so much in believe 8 weeks. They worked  around the clock with wardrobe, trainers, the worked with WC where I got my start. We worked with them to perform on stage, how to walk. talk and absorb the L.A. culture, the west coast hip hop culture. They did it in such a short amount of time. Its  great feat. These guys didn’t come up and mimic.

Ice Cube and his son O’Shea Jackson Jr. taking on his father’s role:

Ice Cube: I just wanted to give him all the ammunition he needed. I wanted to let him know what I was thinking at the time, my perception of everybody, what I thought of Jerry Heller, Eazy, Dre, Ren, Yella, just so if he did ad lib or he did go off script, he would have that ammunition to know how to address this one, address that one, and just how to beat in the same. Because I knew Gary wouldn’t go for anybody being a mimic, so all I knew is that I could just fill him up with information and then let him do his thing and he developed into a great actor and doing this process so I had total confidence in him and Gary to deliver his role.

O’Shea Jackson Jr.:  It’s Universal ya know, it’s a big time studio, and Gary don’t play. So a lot to take on especially when you never acted before but he got me the coaches I needed, all these great coaches teaching me these different techniques to really mold me into something, into an actor, so it was all in the preparation. 2 years, those 2 years, I’d do it again, auditioning, coming back, getting call backs, getting more information, more homework from Gary, and then the bootcamp and all the prep is what really brought out my performance.

Jason Mitchell was pretty much the only one without direct mentor ship in his role as the late Easy E but found that to be more helpful than anything:

Jason Mitchell: As far as him not being here, it’s a great responsibility but I feel like its a great blessing. You know I needed this.  I really, really needed this, It was easier than it seemed to get comfortable. There were so many people around me who wanted it to be right that someone was gonna speak up if it was not. They don’t give you much room to fail. Its either a hole in one or that’s it. They tried to do as much as they could to mke sure I stayed on that path. It’s a great priviliage cause there are so many people who never met him and I get to humanize them. People will forver envision me as him, like ‘Man you Easy E!’ I won’t even be Jason Mitchell to some people. It will be like ‘Man you E dawg!’ That’s incredible, I will live with that forever. Dre is  perfectionist who we see work, Cube is larger than life.

Corey Hawkins on being an unexpected choice to play Dr. Dre and the wisdom the elusive and iconic producer imparted on the young actor:

Corey Hawkins: I just feel humbled. We really from day one set out to do justice to this story. For me, personally, I’m the guy coming from Julliard, you know what I’m sayin’? I just did Shakespeare, Tybalt on broadway. I had a moment where everyone was like ‘I don’t know if you’re gonna be able to do this’ Gary was very aware of how nervous I was to meet with Dre. We ended up going to Katana, sat down watched the playoffs. I don’t even think we really talked about the movie. We started like kickin’ it. So Dre was just like cool. So at the end of the dinner, he pulled out his phone and started passing it around the table and everyone was like ‘Whaat!’ and I was like let me in on the joke, whats going on? And it was my audition tape on his iPhone. At the end of that day I just remember he pulled me to the side and was like ‘You the man for the job, you got this role, don’t worry about mimicking me or impersonating me. We coulda easily found somebody who look like me, sound just like me. I’m just interested in you capturing the essence of what we all represented individually–the good, the bad, the ugly everything in between ‘ 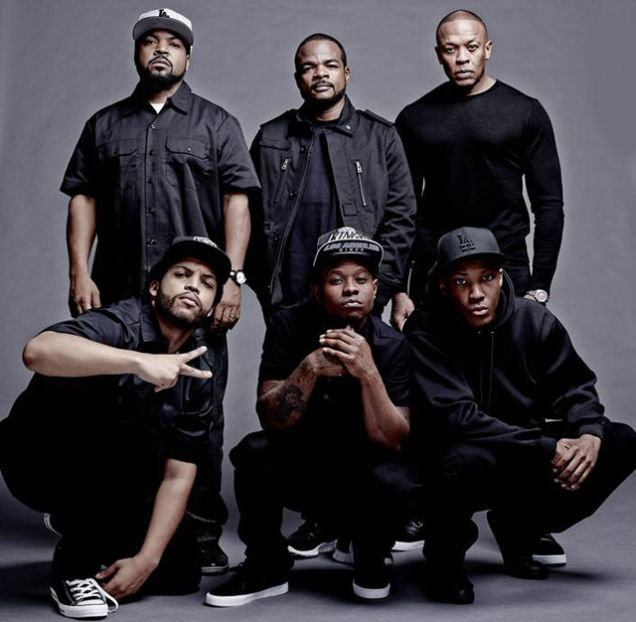