Emotionally relating to, and understanding, the psychotic motivations of manic characters who are purely driven by their feelings of grief and despair can be a harrowing process for many people. But when a film’s story can grippingly and naturally draw out those agonizing emotions, largely in part of the eerie environment of its intensely disturbing main shooting location, the actors can enthrallingly and instinctively showcase those hysterical inspirations. One such entrancing movie that powerfully utilizes its frightening location to its advantage is the action drama ‘Vendetta,’ the latest joint directing effort from twin sisters Jen and Sylvia Soska. In honor of the film’s home release on Blu-ray, DVD and Digital HD tomorrow, Shockya has a new exclusive special features featurette, titled ‘A Haunted Location.’ The clip explores how the drama’s set effected the way the cast and crew connected to the characters and story.

‘A Haunted Location’ begins with one of ‘Vendetta’s actors, Michael Eklund, who plays Warden Snyder, stating that Riverview Hospital in Vancouver, one of the movie’s main filming locations, is an abandoned mental hospital that’s famous for reportedly being haunted. As different shots of the hospital are shown, the performer notes that there’s a lot of history that you can feel when you’re there.

A narrator then states that from 1913 to 2012, Riverview Hospital was the home to some of British Columbia’s most psychotically disturbed patients, including the criminally insane. Actor Jonathan Walker, who plays one of the film’s prison guards, Lester, is then shown on one of ‘Vendetta’s outdoor sets at the hospital. He emphasizes that the hospital has a long and creepy history. He states that he knows from personal experience how disturbing the location can be, because the first time he worked in the building, about 15 years ago, he wondered off the set one day, just to explore and look around.

Walker ventured down one of the hallways in Riverview Hospital, and at the time, the rooms were not yet gutted. He noticed they still had padding and finger nail markings on the wall. The actor also revealed that one of the doors in the hallway closed and locked behind him. He was stuck in the room for about half-an-hour, and it was a frightening experience. He laughed as he said he no longer wonders on the set off by himself.

Besides ‘A Haunted Location,’ The ‘Vendetta’ Blu-ray, DVD and Digital HD will also include two other in-depth behind-the-scenes featurettes, including ‘The Making of ‘Vendetta’ and ‘A Big Transformation.’ The action drama’s Blu-ray and DVD will be available for the suggested retail price of $19.99 and $19.98, respectively.

The following synopsis for ‘Vendetta,’ which is also available on such VOD platforms as iTunes, has been released by its production company, WWE Studios, and its distributor, Lionsgate Home Entertainment:

Dean Cain and WWE Superstar The Big Show star in ‘Vendetta,’ an action-packed thriller about a detective pushed beyond his limits who will stop at nothing for vengeance. When his wife is killed by a criminal that he put away, Mason (Cain), a hard-nosed detective, deliberately gets arrested in order to get revenge. While inside, Mason discovers a new criminal enterprise that those behind it would kill to protect.

‘Vendetta,’ which was written by Justin Shady, reunites the Soska Sisters with WWE Studios and Lionsgate, after they previously worked on last year’s horror sequel, ‘See No Evil 2,’ together. Besides Cain, The Big Show, Walker and Eklund, who’s a frequent collaborator of the twin helmers, Ben Hollingsworth and Matthew MacCaull also appear in the action drama. 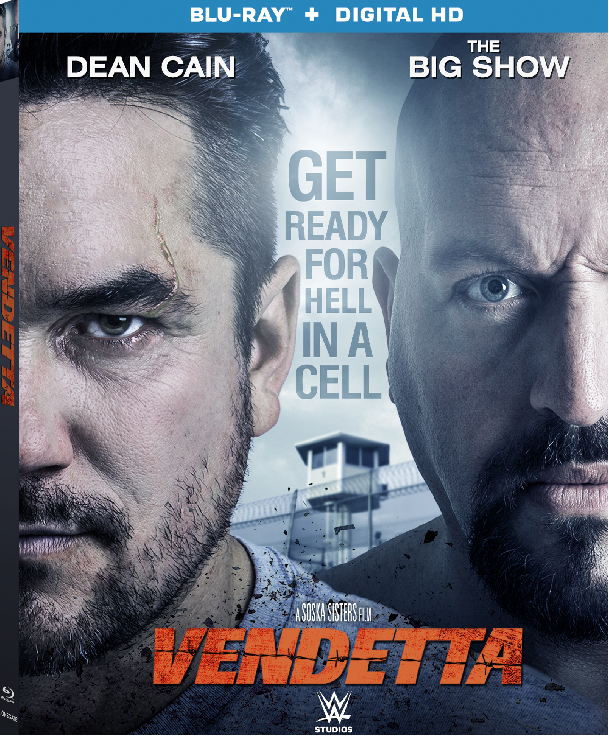