Fully acknowledging the influence of those people who have left a sentimental and meaningful impact on your ideas and work is a gratifying experience for those who are nostalgically reflecting on their life’s journey. The folk and progressive rock band, Midwest Soul Xchange, has endearingly honored their influences on their newly released full-length debut album, the Americana-infused ‘New American Century.’ The band, which is comprised of singers-songwriters-instrumentalists Ryan Summers and Nate Cherrier, poignantly ushers contemporary and relatable folk into the new century. Their initial album also powerfully speaks to the daily millennial struggle of finding salvation for a new day.

‘New American Century’ begins with one of its most engaging entries, ‘Set A Course For Common Worlds,’ which is captivatingly sung by Cherrier. Expanding on its uplifting harmonic opening, the energetic song draws on the band’s inspiration from such popular early 1990s rock bands as the Gin Blossoms, which also hails from Tempe, Arizona, where Summers lives. The up-and-coming band’s first song, which is one of its best, powerfully notes that everyone faces trouble in their life. Driven by its powerful acoustic guitar, the opening tune also powerfully emphasizes that everyone has to fight for themselves, in an effort to achieve their goals.

Midwest Soul Xchange then showcases Summers’ voice on the folk-inspired track, ‘Roots,’ which thrives on its more serious vocals and instrumentals. The musician notes that while people can be strong at times, they can also become weak and vulnerable, depending on the situation they’re in. The relatable tune notes that people can also have difficulty exploring the meaning and paths in their lives, as they can feel diverse emotions sometimes, while in other moments they can’t connect with anything.

The folk-rock band’s next song, the country guitar-driven ‘Truth Attention,’ which is sung by Cherrier, notes the struggle of people working hard to make sure their life makes sense, even if their future appears bleak. The singer meaningfully notes that no one can make a meaningful change if they don’t believe an improvement in their situation is needed, even if their underlying vision and purpose are changing.

Summers took over singing duties again with ‘New American Century’s next track, the intriguingly electronic-driven ‘Revolt Of The Guards,’ which includes another intense message. The folk-rock duo fervently criticizes leaders who watch the people they have sworn to protect struggle to maintain their lives, and do nothing to help them succeed. Passionately singing about how invasive greed only benefits those people who are directly involved in those self-serving plans, and how leaders can often thrive on societal destruction, Summers also reassures his listeners that those in power will eventually receive punishment for their greedy actions.

The band’s initial record then once again showcases Cherrier’s vocals on its next entry, ‘Occupy The Piper,’ which begins with with a unique country-infused acoustic guitar introduction. Playing off its distinct instrumentals, it grippingly criticizes the downfalls of the different classes. The vocalist enthrallingly sings about how one man happily profits from the hard work of another man, and how the upper class shames the pride of the working class. The group emotionally encourages everyone to get an equal share of what’s rightfully owed to them, and not allow the upper class to continue to thrive on profiting off the lower class’s hard work.

‘New American Century’ then once again features Summers crooning on its next track, ‘Kings Among Kings,’ which features a calming harmonica that effortlessly sets the mood for its motivational message. The song celebrates how friends easily support each other, particularly as they remember and celebrate their shared feelings and memories. While the tune also notes that people also experience regret in their relationships, they shouldn’t give up hope on their connections.

Cherrier also captivatingly sings about fighting despair and staying inspired on the record’s next entry, ‘Sun Dried,’ which features stunning rock synthesizers and guitars that naturally support his vocals. The singer inspirationally encourages his listeners not to lose their patience, even if they’re afraid that they’re losing their hope.

The emotionally contemplative next entry, the rock-infused ‘She Flies,’ captivatingly features Summers noting that the woman in his life must face her looming troubles, but he values the fact that her spirits are still so uplifting. While he sings that it upsets him that he has to leave her, he miserably realizes they both have to experience pain in order to move on with their lives. The singer provided his vocals for the last time on the record’s next song, ‘The Return,’ which runs for just over a minute. The rock-infused guitar and vocals serve as a continuation of the previous track, and is as an intriguing end to ‘New American Century’s lone, but gripping, take on the evolution of personal love.

Cherrier provides the vocals for the album’s last two entries, the joyous and folk-inspired ‘Has Anybody Seen Bob?’ and the soulful ‘Four Score And Seven To Go,’ which is one of the duo’s best tracks. The former song features the catchy pondering of what happened to the titular Bob, a man he used to know, as well as his mother, Sally. He also debates whether they’re happier and better off now in their new lives.

The latter track, which is set against a soulful piano, offers an introspective and sentimental examination into how a situation ended. Cherrier emotionally noted that people are never the same after they go through an eventful and meaningful situation, which would allow the song to work well in a dramatic film scene that ponders drastic changes in its characters.

Completely accepting the influence of those people who have left a sentimental and meaningful impact on your emotions and work is a satisfying experience for those who are nostalgically reflecting on their life’s journey. Midwest Soul Xchange has sentimentally honored their influences on the Americana-infused ‘New American Century.’ Summers and Cherrie poignantly usher contemporary and relatable folk and progressive rock into the new century on their initial album, which also powerfully speaks about the daily millennial struggle of finding salvation for a new day. 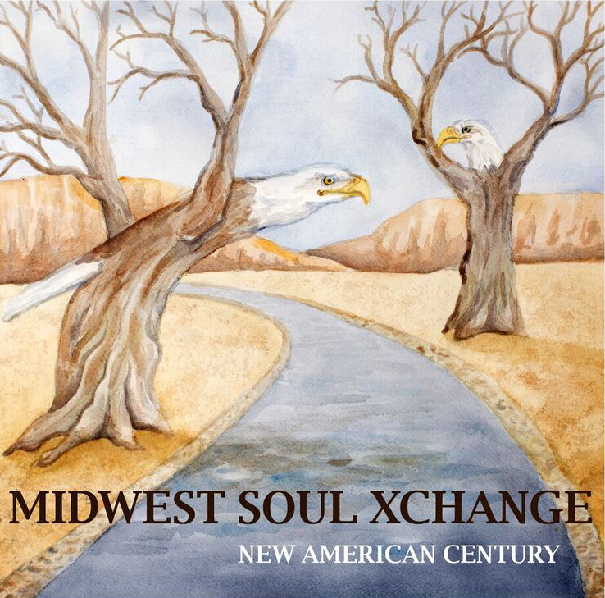