Philip (James Wolk, Zoo) is unemployed and living with his bitch girlfriend Ashley (Emily Tremaine, The Wolf of Wall Street). Philip’s dad Steven (Judd Nelson, Empire – he has done other things since The Breakfast Club) drops in on them and appoints him the task of picking up grandma Estelle (Cloris Leachman, Raising Hope)  at her place in Palm Springs and take her to an assisted living facility. Angry at Steven and Philip’s stoner sister Megan (Mickey Sumner, CBGB / she’s also Sting’s daughter), Asheley calls up the latter berating her for not stepping up and helping out the family. Seeing this as an opportunity to kill two birds, Megan shows up at her brother’s place wanting to tag along so she can get her hands on a big stash of primo weed. The siblings hang out with grandma and get to know her better as adults. Megan lets it slip that they’re there to put her in a home and grandma drives off with her taxidermied dog in order to go to their happiest place before she’s confined to an old folks home and dies alone. Megan and Philip go on a trek in search of grandma and to bring her home. Everybody getting into mischief along the way and growing closer during the adventure.

The Good:  Travelling with a stuffed dog felt like an homage to the cult classic Rubin & Ed. How many road trip films with dead animals are there? Cloris Leachman is one of the coolest old broads still in the business. I like that her character is not a helpless old lady, even though like most elderly people they’re treated as such. The chemistry between Sumner and Wolk is great and they’re believable as siblings. The characters are interesting and relatable.

The Bad: The budget seemed too small to attempt an epic road trip film. Most of the locations looked like they were filmed within blocks of each shot.  The over the top antics they all get into are exactly that. Megan having to flash her boobs to a convenience store clerk so not to get the cops called for her shoplifting. The bits with the toy gun. The situations get into were a little cheesy which kind of ruined the mood at times.

For the most part This is Happening is an entertaining subtle comedy. I was able to watch this film without looking at my phone, which is kind of a big deal.  It’s something to watch on a lazy Sunday, but unfortunately it is a watch it once and forget about it later. 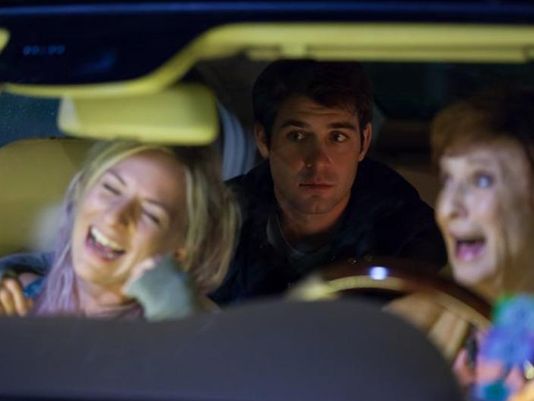