The story takes place in Germany in a luxury hotel where the Italian monk, Roberto Salus (Toni Servillo), is invited to the European G8 summit. The unexpected invitation is done by the powerful Daniel Roché (Daniel Auteuil), chief of the International Monetary Fund, who asks him to confess him during a mysterious night that leads to Roché’s suicide. Consequently the international legislators start to wonder: Was the conversation between the two men about the scheme that is about to be approved? Getting an answer from the holy man seems impossible, since he refuses to break the secret of the confession.

‘Le Confessioni’ (The Confessions) runs on two parallel tracks: the realistic one, that portrays the entity of an international summit, and the metaphysical one, that resonates in the inner voices of the people involved in the enigma. Besides the various characters that take part in the charade — famous writer of children’s books Claire Seth (Connie Nielson), the Italian Minister (Pierfrancesco Favino), the Canadian Minister (Marie-Josée Croze), Mark Klein (Moritz Bleibtreu), the German Minister (Michael Wintzl), the Japanese Minister (Togo Igawa), the Russian Minister (Aleksei Guskov), the French Minister (Stephane Freiss), Matthew Price, the American Minister (John Keogh), the British Minister (Andy De La Tour), Caterina (Giulia Andò) and Ciro (Ernesto d’Argenio) — the true protagonist of the story is power. The one that determines the economy of the world. The outcome is a film that critically explores the evanescence of political leadership, put at peril by a quiet and spiritual heckler, who might have become acquainted with the upcoming and influential global manoeuvre in policy-making.

We enter the tower of Babel, where the polyglot characters speak the same language through their lips, but the idioms of their souls differ. Spirituality, religion, ethics, all intertwine in an unusual manner, without falling into cliché or proselytism. The monk is incorruptible, but he is not a saint. He smokes, he has published books with ideas that his Church finds controversial, however he does not intend to breach his deontology. As a result, Roberto Andò creates a compelling film that plunges audiences to delve into their consciences and moral code. 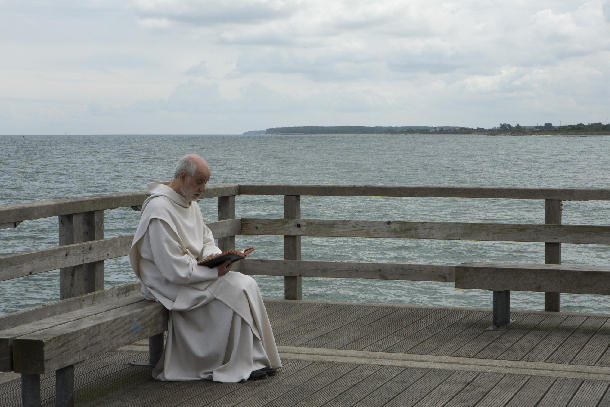