Staying true to yourself, no matter how complicated your relationships become, or how unsatisfying your professional goals and career path ultimately prove to be, is an important life lesson that people of all ages need to learn. That all-to-important life lesson is powerfully emphasized in actor Cheyenne Jackson’s new coming-of-age romantic comedy-drama, ‘Opening Night.’ The film showcases how both students and teachers alike need to learn how to embrace their current circumstances, even if they don’t initially realize the value of each situation. That essential message in the movie, which is now available for download on digital, VOD and iTunes from Candy Factory Films, was emphasized by co-writer and director, Jack Henry Robbins.

‘Opening Night’ follows New York’s hottest new theater director, Logan Joyce (Anthony Rapp), as he detours his career to teach drama at a Pittsburgh high school. After he seemingly settles into his new teaching job, he invites his old friend and colleague, jaded television actor, Eli Faisel (Jackson), to attend the opening night of his adaptation of Shakespeare’s ‘A Midsummer Night’s Dream.’ The performance becomes a loose adaptation, however, as the young actors compete for not only Eli’s approval, but also support and acceptance from each other.

Jackson generously took the time recently to answer questions about starring in ‘Opening Night.’ Among other things, the actor discussed how he was instantly interested in portraying the seemingly successful television star who’s secretly unfulfilled, as he immediately thought the character and story were clever when he first read the script. He also praised Robbins’ smart approach to how he wanted to showcase the characters’ arcs and relationships throughout the comedy-drama.

The Grammy Award-nominated singer and stage, film and television actor began the interview by discussing what drew him to the character of Eli in, as well as the overall story for, ‘Opening Night.’ He noted that he was convinced to take on the role because he liked the comedy-drama’s “script-I thought it was sweet and clever. I am also friends with Anthony, and we have worked together before, so it sounded like fun” to reunite on the movie. Jackson added that he and Rapp had previously “done a couple readings of plays in New York City together. So having that shared history was helpful in creating a lifelong friendship,” as well an effortless working relationship on screen.

In addition to praising his co-star’s work, Jackson also commended Robbins’ work as a filmmaker. “He is funny, smart and totally game.” The actor also expressed his appreciation that the movie’s writer and director “was open to my input, but also had his own strong ideas about the character.”

Jackson then discussed the benefit of shooting ‘Opening Night’ on a smaller budget, as he revealed that “I love independent film. I really enjoy the ‘let’s put on a show’ mentality. You really need to be on your game, and just go with what comes at you.” With the comedy-drama now available on digital, he also noted that he thinks the On Demand platform “has been so important for smaller projects. Our work can now be seen, even if not purchased for full theatrical runs.”

As a two-time Drama League and Drama Desk award-nominated Broadway actor, Jackson has learned to not only value his working relationships, but also the settings and locations where his projects are staged. ‘Opening Night’ takes place entirely in the high school where Logan teaches, on the title day his students’ latest play, ‘A Midsummer Night’s Dream,’ begins its public performances. He thinks shooting on location is beneficial for making a film like this one, which is focused on a theatrical production. “My scenes were all set at the high school. So a movie like this definitely needs an established principle set to ground the action in reality,” he explained.

As an accomplished Broadway actor, Jackson also offered advice to high school students who are pondering whether or not they should pursue acting in college, and later as a career, like Eli does with Logan’s students in ‘Opening Night.’ The performer encouraged aspiring actors to “Be yourself, have fun, study and be open.”

Watch a clip of Jackson portraying Eli in ‘Opening Night’ below 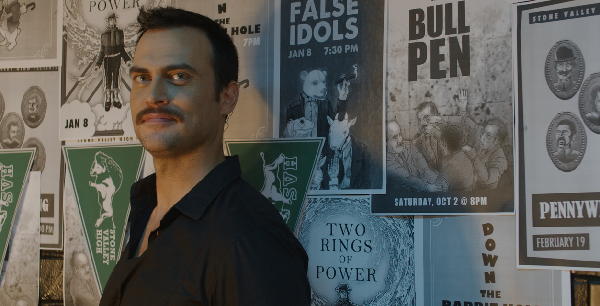