Civilians are being offered an unprecedented gritty look into the life in a contemporary combat zone in the upcoming war drama, ‘Jarhead 3: The Siege.’ The third installment of the action franchise will show how a new Marine who’s on his first assignment becomes enmeshed in a global crisis. The latest insight into military life will be revealed to audiences when Universal Pictures Home Entertainment releases the adventure movie on Blu-ray combo pack, DVD and Digital HD next Tuesday, June 7.

In celebration of the action war drama’s home release, Shockya is offering two lucky winners a Blu-ray + Digital HD copy. To enter, email us at ShockyaGiveaway@aol.com. Let us know that you’re entering to win the ‘Jarhead 3: The Siege’ Blu-ray + Digital HD contest in the email’s subject line and message. You have until the movie’s home release date next Tuesday, June 7 to enter, and you can enter the contest once daily. After June 7, we’ll pick the winners at random and notify them through email. Good luck!

The Blu-ray combo pack, DVD and Digital HD for ‘Jarhead 3: The Siege’ feature an unrated version of the movie. The action drama’s home release also offers an exclusive inside look at the making of the film. In the extra, the cast discuss why they were interested in joining the franchise, what it was like to shoot the battle scenes and how the filmmakers’ vision and collaboration brought the war film to life. The actors also talk about what it was like working with one another while playing soldiers who have to overcome differences and come together for the greater good.

The following synopsis for ‘Jarhead 3: The Siege,’ which was written By Chad Law and Michael D. Weiss, has been released by Universal Pictures Home Entertainment:

Assigned to protect a seemingly safe U.S. Embassy in the Middle East, elite Marine Corporal Evan Albright (Charlie Weber) thought he wasn’t going to see much action. But when a hostile and extreme military group launches a surprise attack aimed at killing an Embassy informant, Albright’s team is caught off guard. Out-gunned and outnumbered, the Marine’s routine assignment escalates into an all-out war. With national security at stake, an international crisis ensues.

Check out the Blu-ray combo pack, DVD and Digital HD box art for ‘Jarhead 3: The Siege’ below. 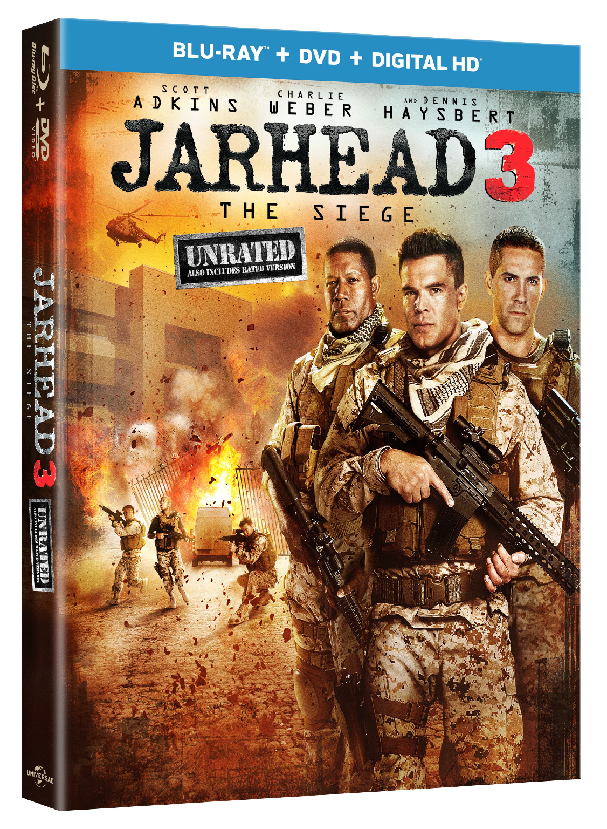