If you expect this look at the music and dance of Argentina to be a plethora of tangos, you’re mistaken, because Carlos Saura does not do clichés.  The eighty-four year old Saura is one of Spain’s most prolific documentarians, having covered topics of Spanish interest including his 2010 “Flamenco, Flamenco,” which covers what I consider the world’s most passionate dance, and “Bodas de sangre, which is a great tragedy written by Federico García Lorca.  Saura himself, however, considers his “Buñuel at King Solomon’s Table” to be his best work, based on his interviews with the late Spanish director, though as he says, “Nobody else liked it.”  If you’ve never heard of Saura , you may be surprised to discover that he has contributed something to the world’s cinema almost every year, sometimes twice, and has been nominated and awarded a score or more honors.

The entire “Argentina” takes places in a Buenos Aires studio and all songs and dances are minimalist, though some feature huge shadowy projections of the entertainers on the back wall many make striking use of light.  Blessedly (for a documentary) there is hardly a word of spoken language.  Instead, the emphasis is on visual effects, and in that regard the movie looks great.

Saura is intent on showing us a cultural background of our southern friends through music, the universal language.  As with Andalusian flamenco, dances and singers work together, all culminating in a climactic dance involving the entire large cast.

Many segments of the film that involve only singers are informative though of just a passing interest, such as one involving the ancestral traditions of the Mapuche Indians of the southwest, a relatively small percentage of the population that consists almost half of Italian extraction.

Some of the dances are particularly sexy, the choreographer urging one couple to hug more closely, while other dances could be compared to the Western style today wherein the partners remain separate, each doing his or her own thing, while grinning at each other from ear to ear. 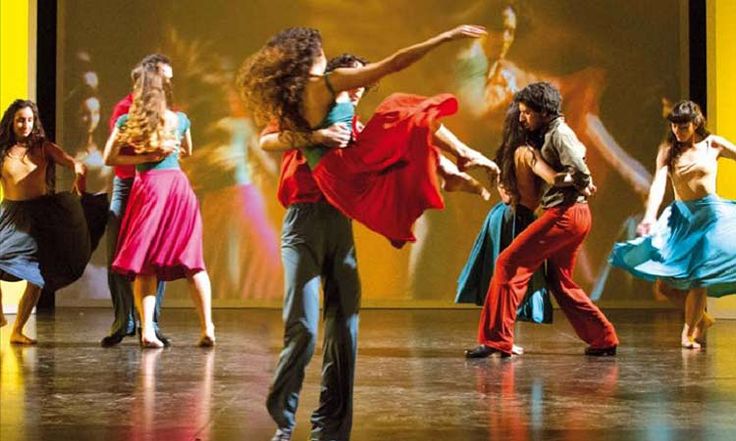