The Evil Dead franchise is a beloved bloody series that’s lodged itself deep into horror lovers’ hearts. The bloody tales of Ash Williams (Bruce Campbell) against the forces of darkness plagued the reluctant hero many years ago. But thanks to his foolish actions, he faces new enemies in the hit Starz series ‘Ash vs Evil Dead’.

Producer Robert Tapert has been with the Evil Dead franchise since the beginning, seeing the horror property multiply in gore and fans who loved every minute of it. At the other end of the spectrum is famed actress Lucy Lawless, who will always be known as the title character in ‘Xena: Warrior Princess’. Rather than shy away from roles of that same caliber, Ms. Lawless has fully embraced that badass character persona which emulates in the complex character Ruby in the ‘Ash vs Evil Dead’ series.

The last time we saw Ash he was striking a deal with Ruby, getting the hell out of the ill-famed cabin that brought all the terror onto the world in the first place. Ash may have left with most of his body parts still attached on his way to Jacksonville, Florida, but the evil he’s fought all these years is fully beginning to unleash itself upon the world.

At this year’s San Diego Comic-Con, ShockYa.com got the opportunity to sit down at a roundtable and speak with producer Robert Tapert and Lucy Lawless. They spoke about what kind of bloody developments fans should expect from season 2 of ‘Ash vs Evil Dead’, from Ruby’s complex story to dropping ‘Army of Darkness’ into the mix. 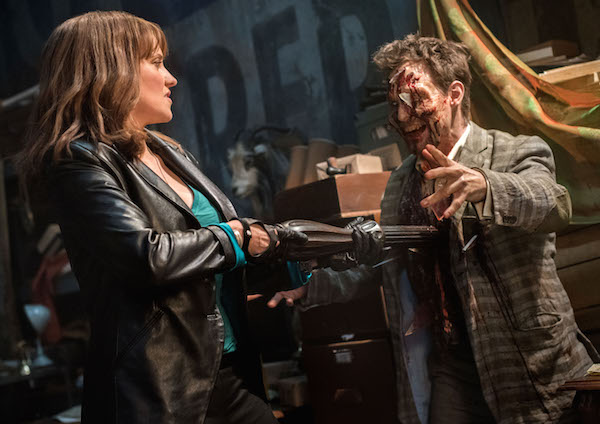 In season 2 you’re fully integrated into the show. How has that been and have you been enjoying where Ruby goes?

Lucy Lawless: Yeah, it’s a lot of fun being in the fold. She gets brought into the team with Ash and with Kelly (Dana DeLorenzo) and Pablo (Ray Santiago), and that just means you get splattered with a lot more mucus and blood and vomit and whatever they can throw at you. So yes, I’ve been well and truly baptized into the clan.

The first season was that of course it was like catnip for everybody who grew up watching Evil Dead and its character, but it really did expand. This season are you changing gears at all or is the tone the same or are you just bringing it to the next level?

Robert Tapert: It is a continuation of the first season but just on a bigger level. By Ash going home, the audience gets to learn where did he come from, who are the characters that informed him, who was his high school buddies, what does the town think about him? So it really fleshes out so many pieces of who that character is that I mean the first 3 movies, no ones even remembers his name except for a trivia question, his last name. So this season and then yes, we made everything bigger and funner and bloodier.

So you’re continuing on this bastion of women who can be badasses. Can you talk little bit about that?

Lucy Lawless: Yeah. I think the writers are just going what else — you know if a nectar brings certain strength to a certain fan base, you want to include them, right? And you can’t frankly, my fans, they wanna see me, they want to see me kick ass. They don’t want to see me being a nice little an archer wife. It’s a turn off for them. So when you wanna bring everything that I have you’ve gotta give some of the things that my fans want. Sometimes I wanna play the mother that’s not really good at looking after her kid. I wanna play someone powerless and someone who doesn’t have a great life skills, but in a show like this you need to bring in all the fans and all the fire that you’ve got.

Season 2 has a overall big bad basically. Can you tell us a little bit of who that might be? Or at least hint at it?

Robert Tapert: The big bad is somebody who was intimately connected to Ruby who now knows that Ash is the chosen one and he must be stopped at all costs.

What is Ruby’s character like this season? We kind of gather like she’s made a deal with the devil basically, but you’re also fighting alongside them. So are they allies?

Lucy Lawless: They are allies. There’s a bit of mistrust going around the gang. She’s not entirely trustworthy.

Robert Tapert: And Kelly and Pablo just don’t trust her ever really, even as they kind of bond together. Ash is more inclusive.

Lucy Lawless: That’s right, Ash is more inclusive. But in the end, and this won’t make any sense now but you’ll get it by episode 10, is that Ruby is her own worst enemy. So just remember that I said that. 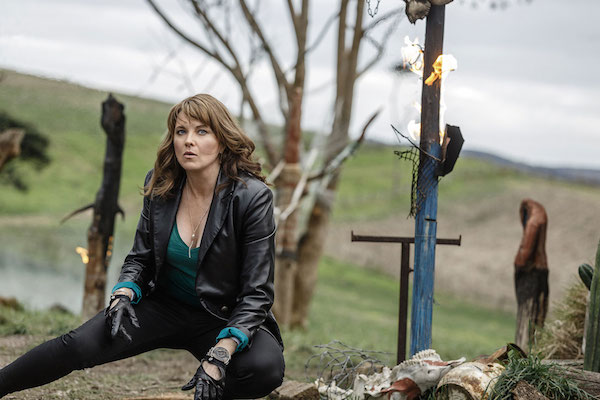 How far out do you have this and how do you map a show like this?

Robert Tapert: Well to be honest that’s been the struggle of the show. So we knew that Ash went home, we knew that there would be a big bad, but in terms of an overarching where are you going to be at the end of season 5 or season 4, that has not been figured out. So we figure that out as we go. When we started this season we thought oh we know exactly where this was going, but once you get the devils in the detail, you go oh, it really wants to take this road or you want to follow this character in a new direction. So that’s been the creative challenge this season is that you have an overall goal and you know thematically what you wanna accomplish but then the events that predate that have been like jello.

Lucy Lawless: And it was a hard, massive season. I don’t think any of us — the writers just wrote really big episodes and the sort of production, you have a lot of value onscreen. It’s exhausting. After 18 minutes I feel like I’ve been watching this for an hour and Rob says we’re 18 minutes into the cut because it’s so hard and fast. So fearless. Yeah it’s a ferocious season.

Robert Tapert: Thank god Bruce is young and can pull it off.

So I’ve heard the rumor – I don’t know if it’s really a rumor or not – but we finally got ‘Army of Darkness’ in this?

Robert Tapert: So ‘Army of Darkness’ is owned by MGM and we just had never properly had a chance to reference it in the first season. So I read somebody’s online article about oh look they’re only pulling from these two movies. This season we do bring up Ash’s events in ‘Army of Darkness’ and reference it. So it was more that there wasn’t a place in it in our storytelling where we needed to talk about that. If he started blabbing to these shop clerks and said “Yeah, I went back to the Middle Ages and did all these things”…

Lucy Lawless: It’s just exposition. He can’t talk about anything.

So it is something that did happen to him?

Robert Tapert: Ash absolutely went back into the past and that is in his memory bank and he’s gonna pull it out at the appropriate time.

You guys said a movie, another movie still isn’t off the table necessarily.

Robert Tapert: Nothing’s off the table. We’re thinking about what that could be, and who that would please and how do we make what is that. So you know Sam [Raimi] talked for many, many years teasing the world about we’re going to make ‘Evil Dead 4’ and all this, and that kind of turned into a TV series. Now Bruce and I are going well, there is a possibility of a movie here so here’s what could be one. Anyways we’ll see what happens.

Can you talk a little bit about getting Lee Majors cast and what it’s like having him on set playing Ash’s father?

Robert Tapert: It’s so cool. I can’t tell the real story, but there was somebody else briefly and I got cold feet about it and Lee Majors was a childhood hero and I just thought he would bring a warmth and a coolness to that retro feel that this series could embrace.

Lucy Lawless: And they look alike! Onscreen their profiles.

Is there any other dream casting you would love to have in the future?

Robert Tapert: Here’s who Bruce would tell you cause he keeps tweeting about it. He keeps saying Lynda Carter, but Bruce is too old for her.

‘Ash vs Evil Dead’ Season 2 premieres on Starz this Fall. 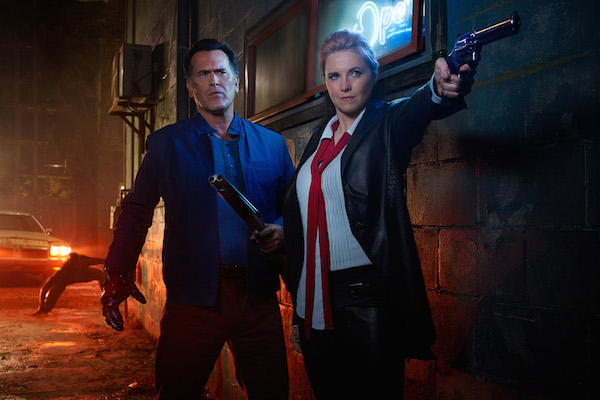