A Tale of Love and Darkness Movie Review

One of the memorable quotes in Natalie Portman’s freshman entry as director is that two persecuted people should be teaming up to fight the oppressor, but instead fight each other.  This is in reference to the long-term tensions between Arabs and Jews in the Middle East.  The Jews were obviously persecuted to the extreme degree by Germans and by Germany’s supporters, while the Arabs were humiliated by colonialism.  As worthy as this quote sounds, it does not really apply since Israeli Jews, in the opinion of Arabs, took land that Arabs considered to be their own thereby substituting their own alleged colonialism for that of Britain.

This concept is a small part of what writer-director Portman hopes to convey, which is to adapt a memoir by Amos Oz, the country’s most celebrated author, translated into twenty-eight languages (including Kurdish).  Portman tries to channel a personal story into an expansive look at Israel’s history from 1945 to 1954, from the time of the dying British mandate, through independence, and up to the author’s creation of a new identity at age sixteen.  In fact we see the Amos Oz character now and then as an elderly man looking back at his grandchildren, part of the magic realism involved throughout the film.

The trouble is that while the printed memoir available at Amazon for under eleven dollars may be filled with reminiscence,  the book, unlike the movie, comes across principally as a celebration of life while the film is a dreary downer, however filled with Slawimir Idziak’s hallucinatory scenes.  “A Tale of Love and Darkness” is mostly darkness, and there is little love between Amos’s father, Arieh Klausner (Gilad Kahana) and the boy’s mother, Fania Klausner (Natalie Portman).  A love of the land of Israel barely comes through as well, though Amir Tessler is well cast as the impressionable young lad, Amos, who is a chip off his old man’s block as Arieh is a writer who ends up as a librarian and Amos absorbs the allegorical stories read to him by his mother, nourishing his own dream to be a writer.

Unlike the expected concentration on the problems between Arabs and Jews in movies coming out of Israel, “A Tale of Love and Darkness” spends little time on relations among the two people, settling for a scene in which the Klausners are welcomed into the home of an Arab family for a celebration.

Amos is shown as an introverted, family-centered kid who is bullied in school because he stands apart reading books while the others indulge in physical recreation.  Amos begins in this film as an introvert who looks up to his parents and does not change a whit until at age sixteen he has formed a new identity (played by  Yonatan Shiray) driving a tractor on a kibbutz.  Portman’s Fania, on the other hand, starts as a dreamer, a romantic excited by the dream of leaving Eastern Europe for a glorious new life in Palestine, but as a result of a passion-challenged marriage to Arieh becomes depressed until her end in suicide at the age of thirty-eight.

Though you may go to this film to see what the fuss is all about, you can discover more by reading the best-selling book, while the film leaves us wondering why Natalie Portman, a gifted actress with fluent Hebrew was so eager to play this role.  Dialogue is in Hebrew with English subtitles. 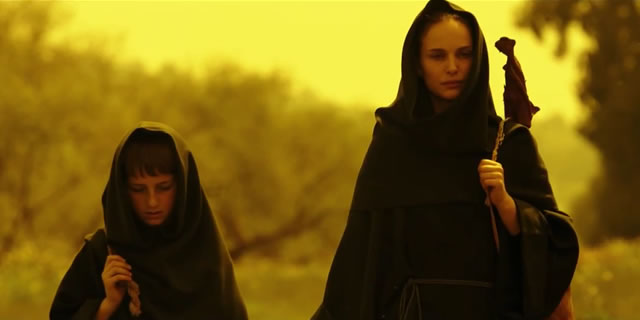