The word “Imperium” means “the authority to command,” often used when discussing Ancient Rome or current videogames.  In Daniel Ragussis, the name shows up in one of the books favored by skinheads and other white supremacists, along with “Mein Kampf,” currently a best-seller in parts of the Middle East.  The movie, which opens August 19, thirty-six days after the superior “The Infiltrator” and could almost be called “Infiltrator 2.”

Michael German, upon whose story Daniel Ragussis adapts this movie, tells of real events, changing the names of the characters. Nate Foster (Daniel Radcliffe), a young idealistic FBI agent, goes undercover like Bryan Cranston’s Robert Mazur of “The Infiltrator,” also based on a real hero–and like Michael German himself.  If you see “The Infiltrator” shortly before taking in this feature, you will connect the dots easily, but more important you’ll see quality differences, at least if you’re the kind of person who can tell the difference between  Cold Duck and Cordon Rouge.  Michael German writes what he knows.  He makes sure to warn Americans that keeping ISIS and the Taliban and Al Queda out of the United States does not solve our problem with terrorism.  We have home-grown militants, some of whom do not look at all ethnic, as witness Timothy McVeigh, a decorated Gulf War Vet who bombed the Alfred P. Murrah Federal Building in Oklahoma City.  German infiltrated extremist groups, ultimately winning convictions against terrorists, reporting deficiencies in FBI counterterrorism operations to Congress.

German also graduated cum laude from a university with a B.A. in Philosophy.  Nate Foster (Daniel Radcliffe) is likewise chosen by the FBI because he is an intellectual who can purportedly understand the ideology behind some domestic malefactors.  Trained by Angela Zamparo (Toni Collette), he infiltrates into three separate groups, fellows who generally do not work together in their plan to rid the country of Jews, African-Americans, and others not to their liking in order to “get American back.”  As in the typical spy story of this genre, he is almost exposed several times, just as “The Infiltrator”’s Robert Mazur figures it’s all over for him when a bad guy sees his hidden tape recorder.  One terrorist finds out that  Nate was not an Iraq war veteran as he says he was.  A skinhead, discussing methods of attack in a coffee shop, asks why he was wearing “Jew Jeans,” namely, Levi’s (“a gift from my cousin”).

The most interesting character, one of the type you probably did not know existed among the far-right, white supremacy organizations, is Gerry Conway (Sam Trammell), who reads a lot, listens to Brahms and Tchaikowsky while seated with Nate Foster, and is not against hearing the music conducted by Leonard Bernstein (though he should have known that the late great conductor’s name is pronounced “Burn Stine,” and not “Burn Steen”).  A film director’s error?  He is an idealist who lives with his wife and two children in the ‘burbs.  It’s not quite clear why he thinks a country without African-Americans and Jews would be better, but the street thugs in another group think nothing of attacking Black-White couples on the street, acting like the Brownshirts in Nazi Germany, hardly  people playing cards with a full deck.  When one such couple is attacked by knife-wielding skins, Nate stops a murderous attack by throwing a rock through the window of a store, distracting everyone.  He later explains that he was afraid that the skins would be caught, considering the surveillance cameras in the store and on the street.

Though “Imperium” follows the trajectory of “The Infiltrator,” it’s a bargain-basement copy.  Danielle Radcliffe, fine in the “Harry Potter” series, is miscast.  He is short and dorky, not credibly able to convince six-foot-four skinheads that he is an ex-Marine determined to the rid the country of “undesirables.”  This, in addition to the mistakes he makes that should have exposed him to the bad guys, such as when they catch him lying about his military service.

For her part, Toni Collette, also a great actress in suitable roles such as the terrorized Dr. Ellen Sanders to assassin Duncan Carlisle, played by Dylan McDermott on the TV series “Hostages.”  Just compare her role as FBI mentor to that of Amy Ryan’s Bonni Tischler in “The Infiltrator.”  Ryan’s toughness convinces.  Collette, who chews gum, or tobacco, or her cud in every scene is difficult to look at because of this habit, though this is a director’s fault rather than hers.

The most pleasant person to watch is Sam Trammell as the intellectual-vegetarian-music-lover Gerry Conway, the most normal looking guy in the movie and also the most dangerous, one who could discuss philosophy and also commit to aggressive actions in support of his ideology.  Otherwise, as stated above, “Imperium” may follow the trajectory of “The Infiltrator” but might be considered a cast-off.  Filmed in Hopewell and Richmond, Virginia. 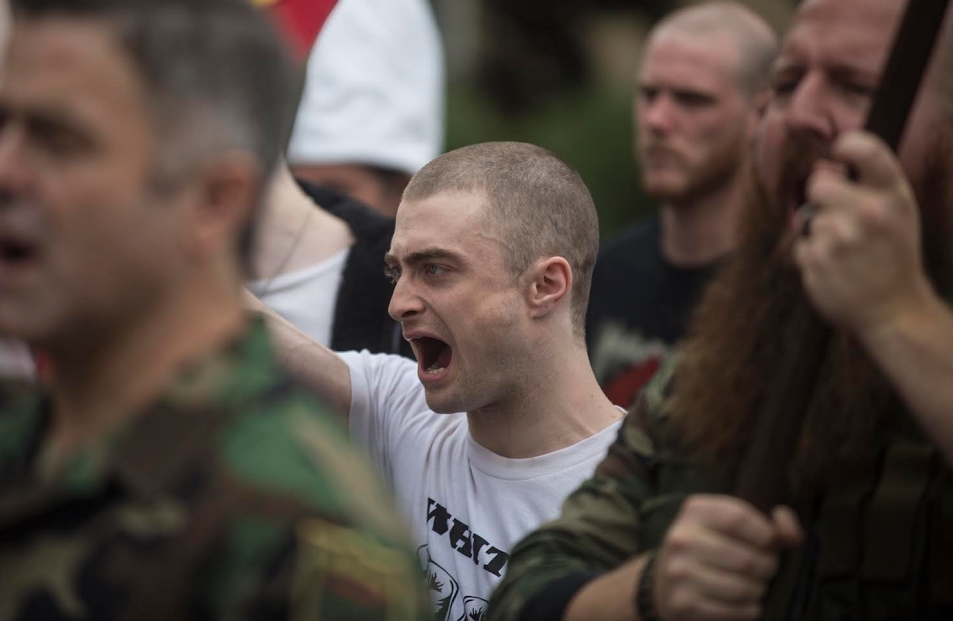