If you hate traffic jams, you might envy the Bedouin people who live in Israel’s Negev desert.  But after you see Elite Zexer’s “Sand Storm,” you will realize that aside from never worrying about a parking space, your life will be otherwise not so good.  In fact if you’re of the female persuasion, you’ll wonder why all the well-off women in the West continue pushing for their rights while the women in this Bedouin tribe have to put up with a helluva lot more from their men.

Zexer’s movie is slow-moving with long takes particularly when focusing on the way one daughter looks at her father for understanding but gets nothing from him at all save for some driving lessons.  Communicating in Arabic (with English subtitles), the folks in one community try to get along as best they can, always wondering whether they must settle with the rules of their society in order to get peace in return.

Bedouins had been accustomed to roaming around not because they’re fidgety but rather to find grazing land for their stocks of sheep and goats, but as this film confirms, most Bedouins now settle in houses and work in agriculture, building trades and as drivers.  This is the condition that finds Layla (Lamis Ammar), a seventeen-year-old living under the stern rule of her father, Suliman (Haitham Omari), who is married to Jalila (Ruba Blal-Asfour) while planning to take on a second wife.

Sometimes Jalila will give hell to her husband, particularly telling him to stop using the expression “have to” rather than “want to,” which is about the extent of her desire to break free of the rules.  Otherwise Jalila seconds the wishes of her husband, warning her teen daughter to stop seeing her boyfriend from a different tribe. (This calls for some research into the tribal nature of the Bedouins, who are split largely on color lines but in this case, the boyfriend has about the same complexion as Layla.) When Jalila finally realizes that her daughter is right to want to marry the person of her choice and rebels against her husband, there are consequences.

Israeli writer-director Zexer likes close-ups, medium shots and long takes to allow the audience to concentrate on the expressions of his principals thereby succeeding to get us to sympathize with Layla’s plight.  And when he shows the family’s little girls watching the proceedings, we realize that alas, they will be forced to accept the same fate as Layla.

The only politics in the movie are matters within the family.  We have no idea whether Bedouins would like their own country, though some have been known to join the Israeli army.  The content of “Sand Storm” follows that of other films about cultural differences between fathers and their wives and children, though conflicts in Western families are in no way as sad as those shown in this traditional family.  Aside from a melodramatic moment or two, “Sand Storm” is hardly a stormy film but serves nicely to show us what it’s like to live in this small society.  What’s more, if you’re interested, you can join an Israeli tour that allows you to visit with a Bedouin family, enjoy its reputation for hospitality to guests, and try their special foods while sitting on cushions. 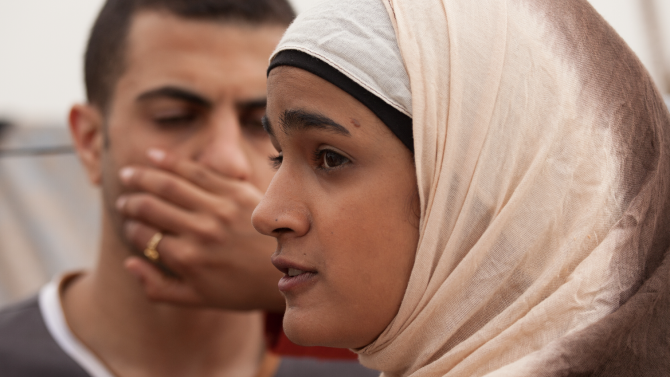