If you’re wondering how a filmmaker has the nerve to do a sequel to D.W. Griffith’s “The Birth of a Nation,” also known as “The Clansman,” you need not fear.  Nate Parker’s film is anything but an apologia for slavery.  This “Birth” finds Parker as a writer, director and principal performer, the rare, thoughtful drama describing a rebellion led by the man whose name is indelibly carved into U.S. History.  Nat Turner, who led an aborted rebellion against his slave owners in 1831, is the subject of a Pulitzer prize-winning novel by William Styron, “The Confessions of Nat Turner.”  In describing the insurrection in Virginia, Styron uses a confession of Turner to his white lawyer Thomas Gray. Turner claims to have been divinely inspired, charged with a mission from God to lead a slave uprising and destroy the white race.

Though sixty whites were massacred, the rebellion ultimately failed, its rebels first decimated by white men in the area of the Virginia farm.  In short order, the farmers are reinforced by uniformed soldiers who train a cannon on the final quarters of Turner and some of his men.  Those not shot were hanged.

Nat Turner (Nate Parker) is treated fairly by some of his owners but brutalized by others.  As a bright boy (Tony Espinosa) who has done some reading, he has his interest reinforced by the teaching of Elizabeth Turner (Penelope Ann Miller), who lives in the farmhouse with her husband, Samuel (Armie Hammer).  For the most part he is treated reasonably well by Samuel, who sees the chance to make some money to save his farm by pimping the adult Nat out as a preacher.  He is expected to quote from the Bible to keep other enslaved people down, relying on such passages as “slaves, obey your earthly masters with fear and trembling” (Ephesians 6:5), or “tell slaves to be submissive to their masters and to give satisfaction in every respect” (Titus 2:9).  But the Bible, like our own Constitution, has inconsistencies.

Nat Turner comes across the passage commanding the Israelites to slay all the Amalekites (Num. 24:20; Exod. 17:8-16; Deut. 25:17-19).  The passages resonate.  He is inspired to gather scores of enslaved people together to plan the insurrection.
In a film that has just a few melodramatic moments—such as when Nat is severely whipped for baptizing a white man on his master’s property—the climactic, chaotic, violent moments might well give rise to cheers in the audience.  Much of the film, however, tells a story simply.  While showing some of the enslaved in bad shape after beatings by whites, others appear to survive, if not to live fruitfully, and have time on Sundays to listen to the preacher and to marry.  There is a sense of community as when a bride and groom, Hark and Esther (Colman Domingo and Gabrielle Union), jump over the broomstick and dance with the kind of fervor that gives them an outlet for their stifled emotions.

“The Birth of a Nation” does not have the entertainment value of “12 Years a Slave,” Steve McQueen’s Oscar-winning portrayal in 2013 of an upstate New York Black man who is abducted and sent back to slavery.  But Nate Parker proves able to rouse audience emotions as well as did Chiwetel Ejiofor in the McQueen story.  Parker appears to have an open field so far on awards nominations in a movie that should be seen by all, particularly to those who simply cannot believe that our great democracy could have put up with such a vile institution as slavery. 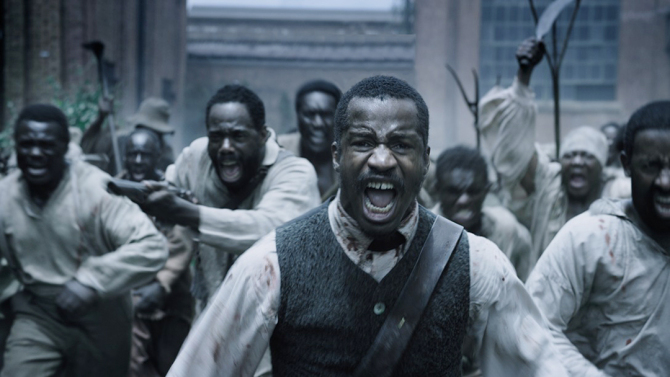