What it means to be truly patriotic is one of the most captivating debates that’s driving the current American presidential election. As United States citizens gear up to voice their opinions by casting their votes next week, one of the most important political dramas to be released this year, ‘The Congressman,’ is powerfully exploring that discussion. In honor of Amazon Prime Video members being able to stream the film free of charge starting tomorrow, Shockya is premiering an exclusive new clip.

The clip, which is titled ‘I’m an American,’ follows Treat Williams’ character, Maine Congressman Charlie Winship, as he makes a heartfelt and compelling speech to his supporters and opponents. The title protagonist reminds his listeners that Americans are free, and aren’t required to take a pledge of allegiance to a flag. He feels the flag is an important element to American society, and insists that it fills him with pride. But he also emphasizes that esteem is aimed towards everything it stands for, including that every citizen has value as an individual. So he feels that every person has the right to choose how they honor the flag.

Vision Films is set to distribute the political satire on Amazon, after the film was released in select theaters nationwide on April 29, and then on DVD on September 6. ‘The Congressman’ marks the feature film directorial and producing debuts of a former Long Island Congressman, Robert J. Mrazek, and actor Jared Martin. The former lawmaker also penned the script for the drama. In addition to Williams, ‘The Congressman’ also stars George Hamilton, Elizabeth Marvel, Ryan Merriman and Jayne Atkinson.

‘The Congressman’ follows Charlie Winship (Williams), a seasoned Maine Congressman who has grown disillusioned with political infighting and special interest lobbyists. When a video of him failing to rise during the Pledge of Allegiance goes viral, he finds himself entrenched in a public firestorm.

In addition to the media backlash, Charlie must contend with a conniving lobbyist determined to ruin his career (Hamilton) and an advisor with a hidden political agenda (Merriman). Despite everything, Charlie agrees to help protect a small coastal village in his district of Maine from a powerful fishing conglomerate—all the while growing closer to the town’s librarian (Marvel). As Charlie experiences this passionate and idyllic view of the American dream, he must decide how far he’s willing to go to resuscitate his career.

Mrazek praised the deliverance of the address Charlie gives in ‘I’m an American,’ saying “The speech Treat Williams perfectly delivers as Charlie Winship should be required viewing in the next (week)-the film is a lifeline to the heart and soul of the American democracy we’re all longing for.”

Also discussing his experience of appearing in the drama, Williams said “I loved playing Charlie Winship in ‘The Congressman.’ He’s a politician who shows us it is possible to be flawed but still have a moral center. He has my vote.”

The Managing Director and CEO of Vision Films, Lise Romanoff, also chimed in on the movie, and called ‘The Congressman’ “the perfect combination of timely politics and entertainment. We couldn’t be more thrilled to be offering this film during an election year when people are re-evaluating American values.”

Watch ‘I’m an American,’ Shockya’s exclusive clip from ‘The Congressman,’ below. 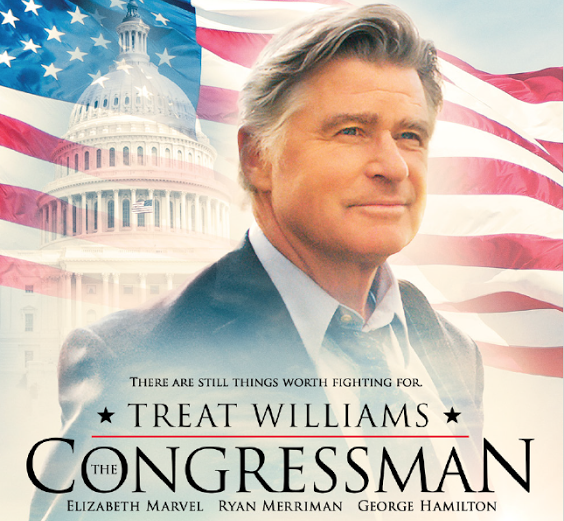