Legendary pirates are battling each other once again in the thrilling third season of the STARZ original series, ‘Black Sails.’ Fans of the Emmy Award-winning drama series can relive the arrival of notorious raider Blackbeard as the latest season is distributed on Blu-ray + Digital HD with Ultraviolet and DVD tomorrow by Anchor Bay Entertainment.

In celebration of ‘Black Sails’ Season 3]s home release, Shockya is offering one lucky winner Blu-rays of all three seasons of the adventure drama. To enter, email us at ShockyaGiveaway@aol.com. Let us know that you’re entering to win the ‘Black Sails’ Blu-ray contest in the email’s subject line and message. You have until next Monday, November 14 to enter, and you can enter the contest once daily. After November 14, we’ll pick the winner at random and notify them through email. Good luck!

The three-disc Season 3 set contains all 10 episodes and over 40 minutes of special features, including 10 minutes of new exclusive extras. The Blu-ray will be sold for the suggested retail price of $59.99, while the DVD will retail for the suggested retail price of $49.98. The ‘Black Sails: The Complete Third Season’ discs will include a Season Two Recap, as well as the features ‘Blackbeard: An 18th Century Pirate,’ ‘The Storm, ‘A Pirate’s Last Words,’ ‘Woodes Rogers’ and ‘Inside the World of Black Sails.’

The third season of ‘Black Sails’ follows Captain Flint (Toby Stephens), Charles Vane (Zach McGowan), John Silver (Luke Arnold) and Jack Rackham (Toby Schmitz) as they vie for control of Nassau. The season explores the drama and adventure in the lives of some of the most famous fictional and historical pirates about 20 years prior to the events in Robert Louis Stevenson’s 1883 classic novel, ‘Treasure Island.’

Season Three of ‘Black Sails’ begins in the wake of the burning of Charles Town. All the New World lives in fear of Captain Flint. When his campaign of terror crosses over into madness, and new threats emerge to challenge his supremacy, it falls to John Silver to locate the man within the monster, before Flint’s war against the world consumes them all.

Meanwhile, on the pirate island of Nassau, it’s a new day. With Eleanor Guthrie facing judgment in London, Jack Rackham sits atop a fortune in Spanish gold, and is hoping to secure his legacy as a king among thieves. To do so, he’ll have to compete with the return of one of history’s most notorious captains, who holds a different vision for their home, as well as a complicated past with Rackham’s chief ally, Captain Charles Vane. All will be tested when a new opponent arrives to claim Nassau, one the pirates could never have anticipated. It knows and understands them. In the blink of an eye, it will do the one thing they never thought possible…turn them against each other.

The first three seasons of ‘Black Sails’ averaged 4.5 million multi-platform viewers per episode, and the series is distributed in over 175 countries and territories worldwide. A fourth and final season of ‘Black Sails’ is currently in production, and will premiere in January 2017 on Starz.

Watch the trailer, and check out the Blu-ray and DVD covers, for ‘Black Sails’ Season 3 below. 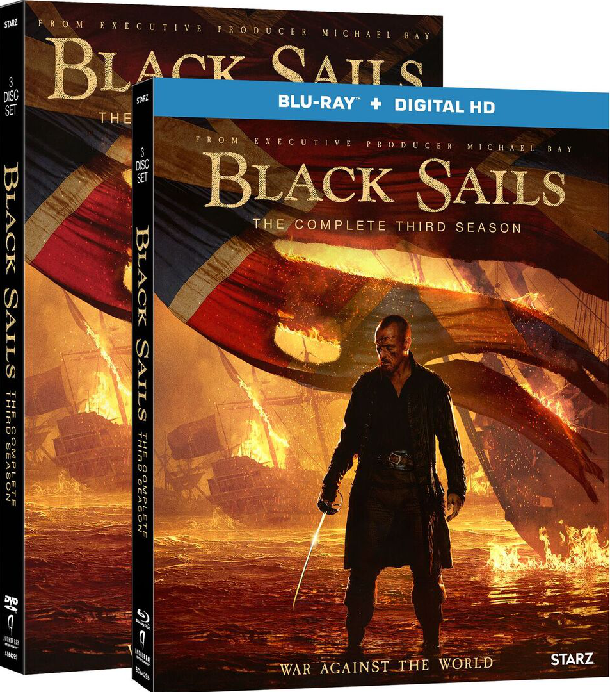