Insightful and honest words that are set against alluring instrumentals can be the most inspirational motivation people of all societies can lean on in the most emotional times of need. Regardless of how people are taught to think about the most important aspects of life, from getting an education to having faith in themselves, knowing how to take a stance on the universal right for survival and happiness is an essential characteristic. Singer-songwriter Charity Ekeke’s debut album, ‘She,’ is a naturally influential chronicle of how international current events, along with personal struggles, impact not only self-esteem, but also how people interact with the world around them.

As an avid music listener, Ekeke, who grew up in in Nigeria before she moved to America, always dreamed of recording her own record. Now based in Los Angeles, her first album not only intriguingly chronicles her own views on the world issues that have impacted her, but also how her personal obstacles have influenced her view on life.

Ekeke instantly captures her listeners’ attention as she immediately begins discussing the emotional atmosphere of current events on ‘She’ during its initial track, ‘If the Roles Were Reversed.’ Fueled by a memorable background of electric guitars, the pop-infused song, which serves as the record’s lead single, makes listeners question how their actions would change if they began to see life through another person’s point-of-view.

The feelings the musician’s powerful first track elicits reverberates into the Adult Contemporary-inspired entry, ‘All I Know.’ Led by equally sorrowful and sentimental vocals, and backed by soulful jazz instrumentals, the song stunningly highlights Ekeke’s vulnerability, and her determination to use that to her advantage as she strives to find happiness.

‘All I Know’ leads into the best and most memorable song on Ekeke’s debut album, ‘He Takes All My Breath Away.’ Driven by a stunning beat and an enthralling backdrop that’s fueled by the unique mix of the keyboard and drums, the up-tempo vocals prove the singer is truly optimistic about her connection with the man she loves.

The next track on ‘She,’ which is titled ‘Talk to Me,’ offers an important message about the state of communication in today’s society through a surprisingly lively and uptempo tone. Ekeke calls for people around the world to form more meaningful and deeper modes of communication. She points to the alarming fact that people are now more comfortable communicating through texting and social media. Apprehensive about how communication has evolved, the musician encourages her readers to talk to others in person more often.

Another notable motivational songs on the record, ‘You Belong,’ features Ekeke encouraging her listeners to understand the importance of getting an education. Fueled by a gripping rock-infused guitar riffs, the singer emphasizes that no one should allow other people define them, and everyone must make their own decisions on how they can best succeed in life.

Ekeke also powerfully encourages her listeners on the entries, ‘Look At Me Now’ and ‘I’ll Catch You If You Fall.’ Knowing she can finally take charge of her life for the first time, her soulful vocals and guitars remind people not to doubt themselves, as it’s up to them to choose who they become. She emphasizes that she’ll support others by sharing their pain and joy, while she also holds her head up high as she embraces who she has become.

‘She’ ends on one of it’s most important inspirational notes, as Ekeke encourages her listeners to not concentrate solely on their present woes, and instead work to improve their future. The electronic-infused pop rock track, ‘She Bears,’ is a midtempo, rhythmic confidence builder for women who suffer from abuse. The musician’s powerful, gripping message reassures all women that a better fate is possible.

Optimistic and authentic words that are set against captivating instrumentals can be the most meaningful motivation people of all societies can lean on in the most emotional times of need. Regardless of how people think about the most vital elements of life, knowing how to take a stance on the universal right for survival and happiness is a powerful characteristic. Ekeke’s debut album, ‘She,’ is a naturally influential chronicle of how international current events, along with personal struggles, impact not only self-esteem, but also how people interact with the world around them.

For more information on Ekeke, visit her official website, as well as her Twitter and Facebook pages. Watch the music video for ‘If The Roles Were Reversed,’ and listen to ‘She’ in it’s entirety, below: 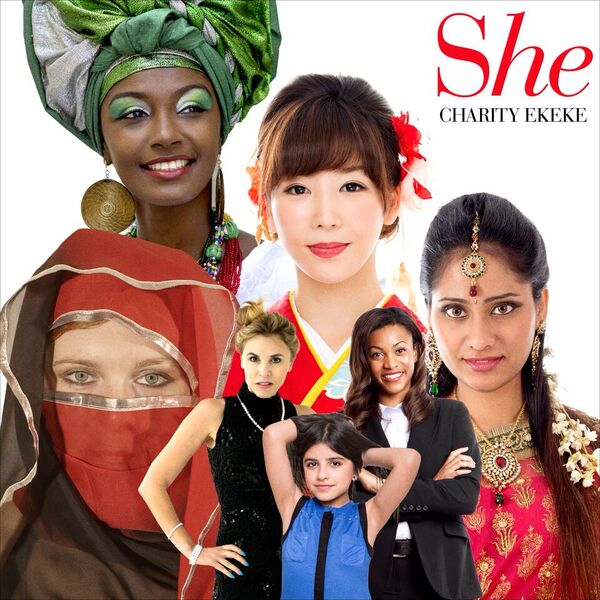