Interview: Stefania Owen Talks All We Had (Exclusive)

Asserting their independence, no matter what obstacles they’re forced to overcome in the process, is often a powerful way for many people to claim their own identity. While that journey is meant to be invigorating and beneficial to their freedom, they can also realize how important it is to have supportive relationships with people who honestly care about their well-being. That essential benefit of having a loyal bond with someone while searching for liberation is highlighted in the mother-daughter relationship in the new drama, ‘All We Had.’

The movie, which is based on Annie Weatherwax’s 2014 novel of the same name, marks Katie Holmes’ feature film directorial debut. Gravitas Ventures is set to release the drama in theaters and On Demand this Friday. The filmmaker also portrayed the mother in the drama, which emphasizes the powerful effects of a parent-child relationship.

‘All We Had’ follows a 14-year-old teen, Ruthie (Stefania Owen) and her young mother, Rita (Holmes), whose lives has never been stable. After making an impromptu decision to flee Rita’s latest deadbeat boyfriend, the mother and daughter become determined to make a better life for themselves, despite Rita’s lack of work experience and money. The two decide to live out of their beat-up car until they arrive in Boston, the next city on their list of where they can start over.

Along the way to their new lives, Rita and Ruthie stop at a diner in a small town, and when it’s time to pay, they decide to leave without settling their check. But after their car breaks down as they try to make their escape, they decide to ask for pity from the diner’s kind-hearted owner, Marty (Richard Kind). Despite initial reluctance from Pam (Eve Lindley), a transgender waitress who feels her boss should call the police, Marty decides to offer the mother and daughter jobs in the restaurant, so they can start a better life.

Despite Rita’s insistence that she wants to change for the better after being hired at the diner, she quickly falls back into her old destructive habits. She continues her dependence on alcohol in order to feel better about her life, and forms a relationship with local real estate agent, Vic (Mark Consuelos). While Rita initially believes she has finally found a stable relationship, particularly after Vic finds her a foreclosed house that she can seemingly afford, he soon proves to be exactly like all of her previous boyfriends.

Much to Ruthie’s apprehension, her mother then begins to connect with Lee (Luke Wilson), a dentist who’s also battling his dependence on alcohol. While Rita is happy that she has finally found someone who can understand her struggles, Ruthie begins to rebel by engaging in her own destructive behavior, in order to fit in with her peers and lead a seemingly normal adolescence. But the mother and daughter ultimately realize that the one person they can trust the most is each other.

Owen generously took the time recently to talk about playing Ruthie in ‘All We Had’ during an exclusive phone interview. Among other things, the actress discussed how she was drawn to play the protagonist in the drama, as she related to the authentic mother and a daughter relationship between Ruthie and Rita, who will do anything to protect each other, no matter what situation they find themselves in. Owen also described the shooting of the movie as one of the best experiences of her life, particularly since Holmes was one of the most considerate and genuine co-stars and directors she has ever worked with on a film.

ShockYa (SY): You play 15-year-old Ruthie Carmichael in the new drama, ‘All We Had.’ What was it about the character, as well as the overall script, that convinced you to take on the role?

Stefania Owen (SO): I come from a very close family, so I really loved the fact that the story was based around a mother and a daughter’s relationship. I don’t think we see that enough on the big screen. When you become a teenager, you go through a lot of struggles with your mother. But there’s still nothing like that bond between a mother and daughter.

I think the bond between Rita and Ruthie is so authentic. It’s an honest depiction of what it’s like for a daughter to have a close bond with her mother, as they go through all of these ups and downs. But at the end of the end, they love each other, no matter what. So the bond between the mother and daughter is really what drew me to Ruthie.

SY: While Ruthie experiences hardships while struggling to survive, were there aspects of the character that you could relate to while you were filming?

SO: I feel like Ruthie and I are both quite tough. We know what we want, and don’t let people boss us around. We follow what we believe.

SY: The film is based on Annie Weatherwax’s 2014 novel of the same name. Were you familiar with the book before you began shooting the movie? How does having source material influence the way you approached playing Ruthie?

SO: I did read a little bit of the book, and Katie and I talked about it. While the movie is based off the book, the film’s plot doesn’t follow the book’s story directly, which I thought was great. I think it was important for us to create our own characters. That gave us more freedom in how we could show them on screen. But I did read the entire book after we filmed, and thought it was amazing.

SY: ‘All We Had’ marks Katie (Holmes’) feature film directorial debut. What was the experience of collaborating with her as a director, particularly since she also played Ruthie’s mother?

SO: Working with Katie was great, and was one of the best experiences of my life. She’s so smart, and would switch hats between acting and directing so seamlessly. She made me feel so welcome on set; she actually made everyone feel so welcome on set, whether they were a cast or crew member. She’s so kind, considerate and genuine, and I really do look up to her. She has inspired me to want to direct and continue to act.

SY: Were you able to have any rehearsals with Katie and the rest of the cast, particularly Eve Lindley, since Pam becomes Ruthie’s biggest confidant?

SO: We did have some rehearsal time; it wasn’t a lot, but we had maybe one or two days. Katie had Eve (Lindley), who plays Pam, and I went out to lunch together before we began filming, so that we could get to know each other. I think that was really helpful, and it shows in the film that we actually are really close and trust each other. We had genuine relationships with every cast member, and I think that really helped us connect on screen.

Getting to know each other off screen the most helpful thing, since the film is quite emotional and dark. But the rehearsals were also important in bringing the characters to the screen. I couldn’t have brought my character to life without my castmates, and I’m so happy we became close.

SY: Since the film does feature those dark elements, did you, Katie and the rest of your co-stars work to include some comedic moments in the story?

SO: I think the script was written very well, and does have some great light-hearted moments. It’s a great story that does feature some comedic elements, and I think that was the writer’s choice.

SY: While Ruthie loves her mother, the teenager still occasionally becomes upset with Rita for the bad decisions she makes, and the teen and mother roles are reversed at times. How do you feel that aspect of the mother-daughter relationship affects Ruthie, and influences her outlook on life?

SO: I think every teenager goes through that-at first, they see their parents as superheroes. But as they get older, that switches, and children see the flaws in their parents. I think everyone can relate to that, which is why I think this movie is very special.

While I was filming, I really did feel like Ruthie. I would get so into character, when I got home, I would go right to sleep. I was so in character for the month we filmed, I really understood Ruthie’s hatred for Rita’s choices. I felt her sadness and anger, so that part of the story came naturally.

SY: Since you felt so connected to Ruthie while you were filming, did she stick with you when you weren’t filming? How did you separate yourself from the role once you finished shooting ‘All We Had?’

SO: When you shoot a movie like this one, the filming period is so intense. You become so close to the people you make the film with. While I really did feel like this character, it was also important to leave her behind. Otherwise, I could become stuck in this anger or sadness.

I grew up in New Zealand, and I went back home after I finished the film. I went back into school, so I left Ruthie behind. But that was hard, because I was leaving a whole lifetime behind. I lived this life as this character, but I had to let go, which is a big part of filmmaking. Once I got home, I was me again. I have great friends and family members who supported me. So it was nice to let the character go, but also sad.

SY: Speaking of friends, in an effort to make friends at her new high school, Ruthie tries drugs and alcohol, despite her being upset that her mother relies on alcohol in order to contend with her emotions. Do you feel she turns to those activities to garner the attention and appreciation she doesn’t receive at home, while also feeling better about herself?

SO: That is part of high school-there is peer pressure as you grow up. You have to learn how to deal with it, and everyone deals with it in a different way. I think every teenager goes through the experience of feeling as though they have to fit the mold. So I think it’s really important for people to see that on screen, so they know that they’re not alone.

SY: What was the experience of shooting the drama on location in New York? Were you also able to go return to New York City last spring, in order to attend the film’s premiere at the Tribeca Film Festival?

SO: I love New York-it’s one of my favorite cities, and it was cool to explore different parts of it. We filmed in Brooklyn as well as Upstate New York, and it was really fun. I was able to go to the Tribeca Film Festival, which was also fun.

Watch the official trailer for ‘All We Had’ below. 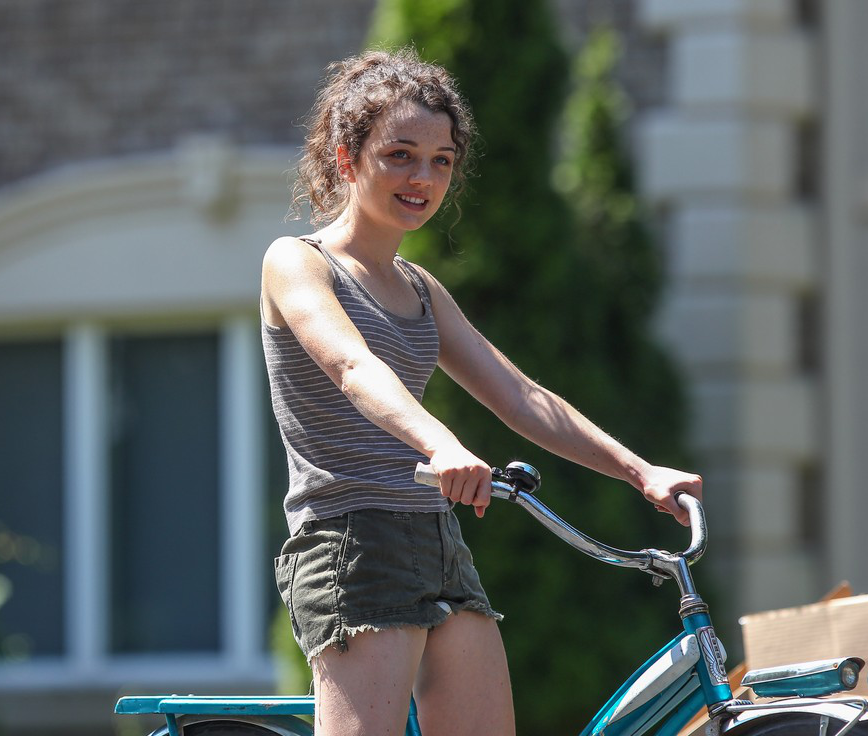