Jackie Chan is on a mission to uncover a lost ancient Indian treasure and protect an ancient culture from a team of ruthless mercenaries in his latest action-adventure film. The comedy, ‘Kung Fu Yoga,’ is showcasing the actor’s signature talent of performing as a martial artist who determinedly tries to save society.

In honor of Well Go USA Entertainment releasing the movie today in select theaters across America and Canada, Shockya is premiering an exclusive clip from ‘Kung Fu Yoga.’ In the clip, Chan’s character, Jack, utilizes the help of his colleagues to fight their way into the Temple of Thuban, in order to further search for the treasure.

‘Kung Fu Yoga’ is a multi-lingual film that features Mandarin with English and simplified Chinese subtitles. The adventure comedy was written and directed by Stanley Tong, who previously worked with Chan on such films as ‘Rumble in the Bronx’ and the ‘Police Story’ series. In addition to Chan, the martial arts movie stars Aarif Rahman, Lay Zhang, Sonu Sood, Disha Patani, Amyra Dastur, Eric Tsang, Zhang Guoli and Mu Qimiya.

Jack (Jackie Chan), a world-renowned archaeology professor, and his team are on a grand quest to locate a lost ancient Indian treasure when they are ambushed by a team of mercenaries and left for dead. Using his vast knowledge of history and kung fu, Jack leads his team on a race around the world to beat the mercenaries to the treasure and save an ancient culture.

Watch Shockya’s exclusive clip from, and check out the poster for, ‘Kung Fu Yoga’ below. 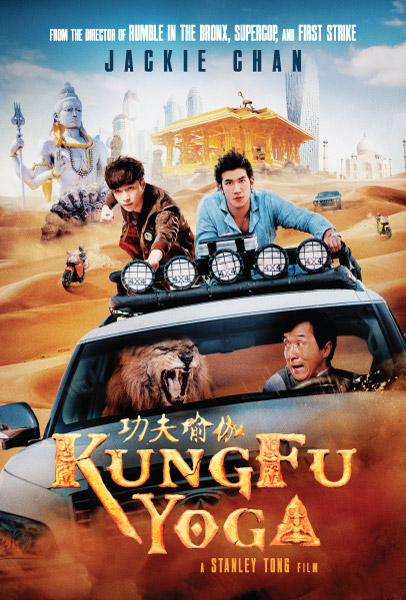