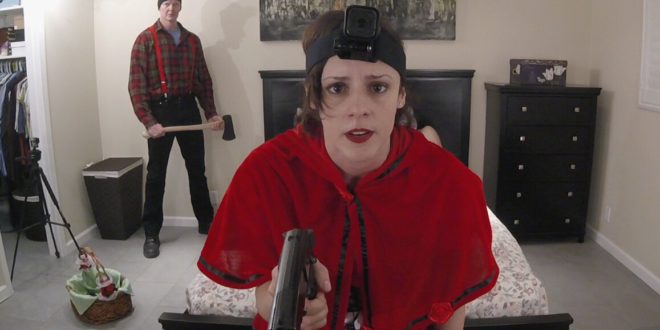 Photo from the film #FromJennifer

The Good: The characters are funny. The Stephanie character has the typical annoying YouTube star persona that you hate, but since she’s not a total dick you kind of like her also. I don’t think her character could carry a movie on her own, but I wanted more of her.

The Bad:  Jennifer’s aversion to the nickname Jenny “is a female donkey” could have been elaborated on a little more, in order to give the audience the full picture of her childhood torment; but then again, that might have revealed too much about her mental state. She’s an unlikable character. I don’t feel sorry for her, I just feel annoyed by her desperation. They used 4 go-pros to film, and the sound picks up everything.  It couldn’t be helped by ADR, because then they would have to replace all of the audio. The downside of going cheap and filming on sets with hollow hard wood flooring.  It was noticeable when scenes had a lot of people clomping around.  In the bar scene they had a girl change her shirt about 3 times and moved her around in order to look like the bar had a lot more people. This is L.A., you can get any random off the street to be in your movie.

The DVD special features consist of:
Alternate Opening [2:19] where Jennifer is auditioning poorly for a horror film. It was poorly acted and executed to the point of cringing, so I’m glad they didn’t use it.

Alternate Ending [0:54] where Stephanie has a special message for Ralph which I’m also glad they did not use. The final cut they used was just right.

Deleted Scenes – Jennifer’s Monologue [1:15], Date With Albert [2:20], Extended Call [1:13]. The only one I would have wanted them to keep is Date With Albert. It was probably cut for time, but some of the other excruciatingly long bar scenes could have been trimmed down to fit in this scene.

2 scene Outtakes [5:41] I would have preferred a series of short clips, rather than two boring long scenes that weren’t funny enough to consider as outtakes.

The Final Word [1:49]. Tony Todd being creepy. I wouldn’t consider this an outtake, just Tony improvising and making the audience uncomfortable.

#FromJennifer is actually part 3 in a trilogy (To Jennifer & 2 Jennifer) which were shot on iphones 5 & 6; and apparently there’s a 4th film on the way. I like this new-ish version of found footage storytelling. It’s unique, but again the quality isn’t great. If you are able to overlook the webcam cinematography, then it’s not a bad effort. The story pulls you in, the themes are current, and the ending is funny and tragic at the same time.

Acting: B-
Story: B
Technical: C
Total Rating: B
Reviewed by: JM Willis