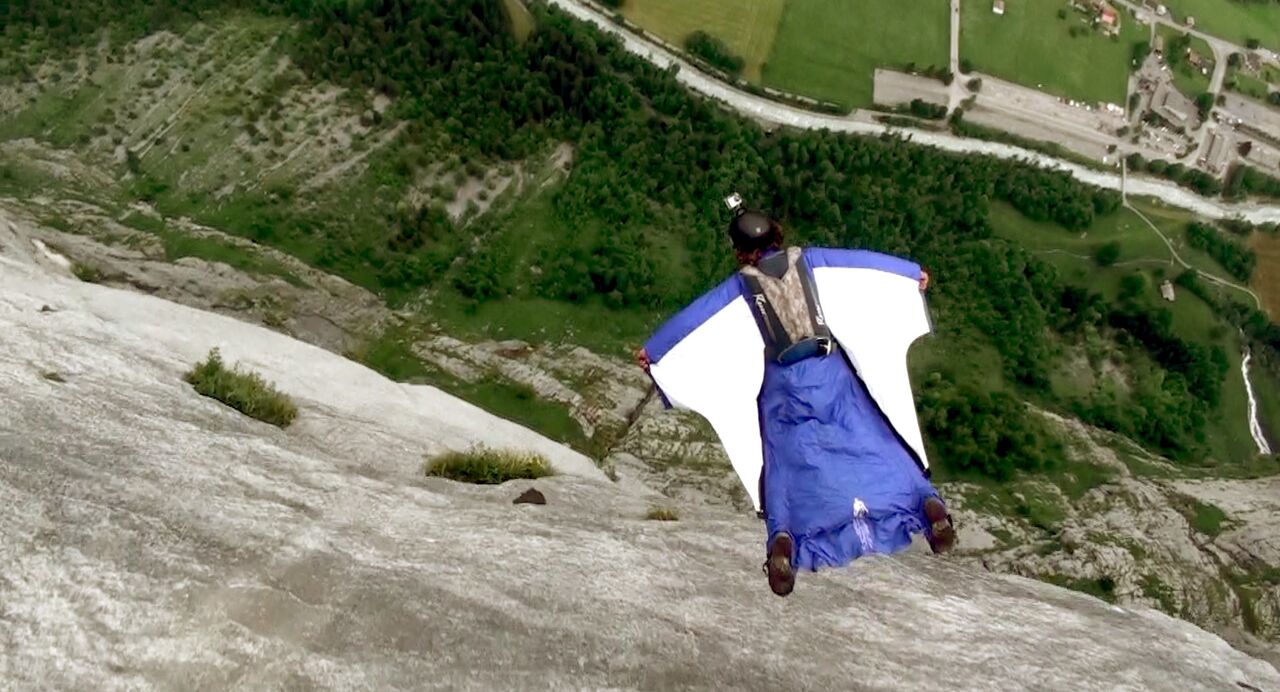 Jumping into the void, and continuously pushing the boundaries of what’s possible, both physically and emotionally, are powerful characteristics of many extreme sports enthusiasts. That was certainly the case with the late Alexander Polli, who rose to fame by recording his basejumping excursions and posting them on YouTube. The wingsuit pilot, pro-B.A.S.E. athlete and viral star, who was noted for such videos as ‘Batman Cave Jump,’ subsequently made the leap into acting with the new action movie, ‘Base.’

The drama is now available on iTunes and On Demand worldwide, courtesy of Kew Media Group, Vertigo Films and Infinite Wisdom Studios. In honor of ‘Base’s release, Shockya is premiering an exclusive clip, which is titled ‘Meet Max Bridge.’

In the video, Polli’s character, JC, receives a clip of a fellow basejumper who shares his admiration for JC. The fan also experiences his interest in jumping with the famous extreme sports enthusiast, before he shows off his own skills by jumping off a bridge.

The movie marks Polli’s only on-screen acting credit, as he sadly died shortly after production was completed on ‘Base’ last year. The 31-year-old extreme sports enthusiast was involved in a devastating wingsuit accident in Chamonix in August 2016.

‘Base’ was directed by Richard Parry, who also co-wrote the script with Tom Williams. The action drama was produced by Michael Ford of Infinite Wisdom Studios, and executive produced by Allan Niblo and James Richardson of Vertigo Films.

‘Base’ is the first full-length feature film that explores the world of B.A.S.E., and fuses it with narrative fiction. The movie showcases some of the most breathtaking views from around the world, and features GoPro footage from the world’s best wingsuit flyers.

The drama explores all corners of the globe from the basejumpers’ perspective, and is fused with narrative fiction and plot surprises. The plot follows JC (Polli), a B.A.S.E. jumper and a global playboy who lives his life quite literally on the edge. He pursues man’s greatest dream – to fly. But when a jump goes wrong, that dream is violently shattered.

Haunted by the event, JC is drawn to his best friend’s lover, Ash (Julie Dray). He also pushes himself harder than ever before, by flying lower, closer and faster, and recording every moment on film. Soon JC’s dark descent threatens not only his own life, but the lives of all those around him.

While discussing the drama, Parry said: “‘Base’ is a film about a man who throws himself off the edge and into the void, and thunders down precipices at 250 km/h, inches from death. It’s also about the need to be different, the desire to experience life to the full(est) and the willingness to reconcile the dangers in pursuit of that life.

“I loved the idea of a unique film that’s set in the globetrotting world of B.A.S.E., and focused around these characters whose lives are self-immortalised on camera for the briefest moments. I was immediately drawn to the material and excited by the challenge: To keep the rawness of the jumps, and yet craft an engaging story at its heart. I also wanted to maintain the edge and believability, and still make an original, exciting and cohesive movie. ‘Was that real?’ has proven a common refrain amongst test audiences to date. It’s a reaction that makes me think we ultimately found the balance we were looking for,” Parry also stated.

B.A.S.E jumping and proximity flying has exploded in the last 10 years, with the growth of YouTube and other video sharing websites, as participants continue to push the boundaries of what is possible. However, it’s not a new sport, and has achieved iconic status as a result of its appearances in major movies over the last 40 years, including ‘Batman Begins,’ ‘Tomb Raider’ and ‘Star Trek.’ But it has become one of the most dangerous of extreme sports, as over 300 deaths that have resulted from jumps have been recorded since 1981.

In honor of co-writerdirector Richard Parry's action drama, 'Base,' being released on iTunes and On Demand, Shockya is premiering an exclusive clip, which features wingsuit pilot and pro-B.A.S.E. athlete-turned-actor, Alexander Polli.