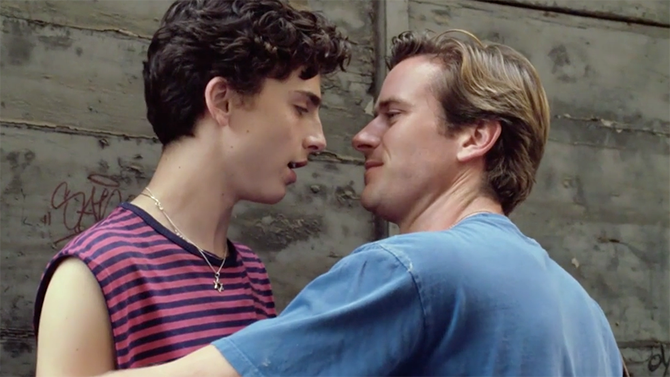 Title: Call Me by Your Name

Italian director, Luca Guadagnino returns to the big screen with a profound coming-of-age story. It is the summer of 1983, and the 17-year-old Elio Perlman (Timothée Chalamet) is spending the days with his family at their 17th century villa in Northern Italy’s countryside. He soon meets Oliver (Armie Hammer), a handsome doctoral student who is working as an intern for Elio’s father (Michael Stuhlbarg ). During the “dolce far niente” of those summer days, Elio and Oliver discover the fusing power of love. As Oliver will say at one point, “Call me by your name and I’ll call you by mine,” the two lovers osmotically find themselves in the other.

The screenplay is exquisite in preparing the grounds for Guadagnino’s elegant storytelling, harmoniously edited by his long-time collaborator Walter Fasano. James Ivory was the one who adapted the novel by André Aciman. Having directed ‘Maurice’ in 1987, Ivory knew how to chronicle a same-sex love during the eighties, also in consideration of his personal experience with his life partner, Ismail Merchant. The film portrays suavely the dynamic of falling in love, how two people enjoy not just the physicality of passion, but also the thrill of spending time together dozing in the sun, chatting, walking, brushing the palms of each other’s hands.

Luca Guadagnino brilliantly plunges audiences in one of his sophisticated realms. The Perlmans and the guests who happen to visit their summer estate will engage in conversations about Italian Prime Minister Bettino Craxi or filmmaker Luis Buñuel or Antonia Pozzi (Guadagnino tributes his second unit director Ferdinando Cito Filomarino who made a film about this Italian poetess). Elio is just as erudite as the ambiance he grew up in, he is a polyglot, a music prodigy and a voracious reader. He is also popular with girls, but he is still figuring out his sexuality. This journey of discovery is shown by Guadagnino in a truthful way, that never falls into vulgarity. Despite the teenager is very smart for his age, as he says to Oliver he “knows little of the things that matter.” And as in a passage from Marguerite of Navarre’s tale “The Heptaméron,” that is read to Elio by his intellectual parents, the youngster will wonder: “Is it better to speak or die?” Every line of the film is pondered and drenched with inspirational passages. A beautiful speech done by Mr. Perlman to his son, is emblematic in the way it poetically explicates what it means to live, love and being truthful to one’s nature.

The landscape in which the story takes place is crucial to shape the characters’ personalities and courses of action. We are plunged in a nostalgically intellectual world that predates the virtual era; a universe where instead of constantly holding in our hands a smartphone, people would carry paper books around, use rotary dial landline phones, walk-mans, and digital watches.

Luca Guadagnino fully contextualizes the events of his film in its historical and geographical setting, allowing non-Italians to learn more about the boot-shaped land. He does so, also by choosing to make an international film, where his refined characters speak multiple languages, but are at the same time depicting an incredibly glocal reality. Guadagnino unveils a less known part of Italy: Lombardy. The story takes place in the city that the director has elected as his home, Crema, betwixt the local “sciuras” (term for ladies in Northern Italy) and regional dishes such as the “tortelli cremaschi.”

‘Call Me By Your Name,’ seems to be truly Heideggerian (the philosopher is even mentioned at one point), in the way it epitomizes the idea of Being-in-the-world and Being-for-others. Elio’s concern (that Timothée Chalamet expresses with every minute expression), seems to stand for the concept of Sorge: the apprehensions concerning the future. Elio, as any person his age, is futural. His taste of temporality tinges the love experience with a variety of emotional nuances, that strongly resonate with all audiences.