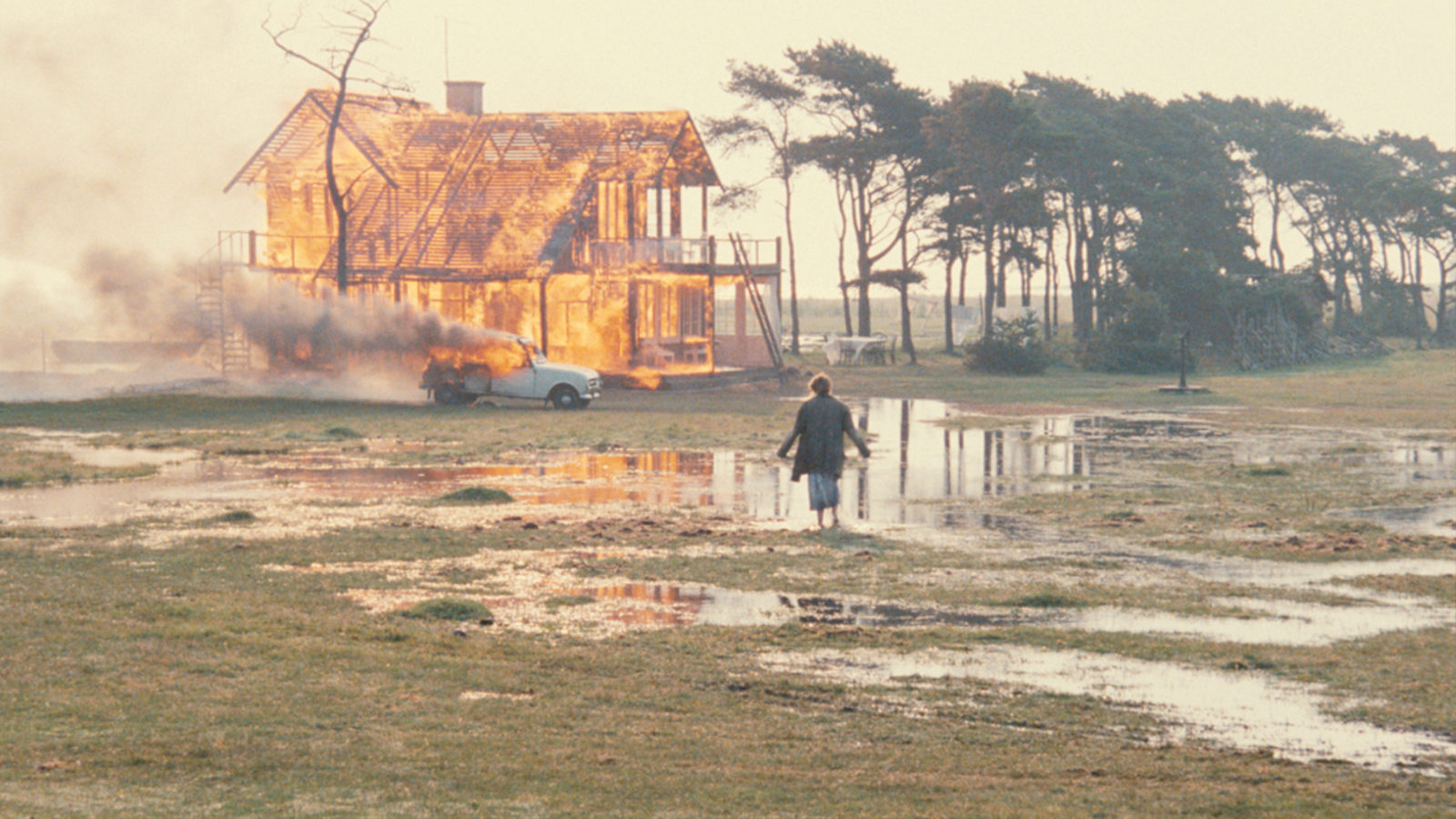 Photo from the film The Sacrifice.

The Doomsday clock is ticking and while it ticks, the world remains whole, if deeply fragmented. Now at two minutes to midnight, or is it three? No matter. You cannot blame everything on President Trump. John F. Kennedy moved the minute ever-so-close in the early sixties by challenging the Soviet Union on the high seas but the only bang we heard was from Khruschev’s shoes. Now, though, with climate change competing with nuclear weapons as the ultimate globe-buster, we need something, but what do we need? Is it more spiritualism? More home town religion? A different President and a more flexible Congress? Who knows? Maybe Andre Tartovsky can clue us in as he has already done with his final film “The Sacrifice,” which he wrote and directed while dying from lung cancer. Facing imminent death and the loss of everything, Tartovsky, an expat Russian filming in Swedish with the Ingmar Bergman’s favorite lenser Sven Nykvist, Tartovsky unfolds a drama with no music on the soundtrack save for a Bach aria, a quick melody on the flute, a movie devoid of humor, unless you get your funny-bone tickled by watching a grown man having sex with a witch.

Is that what we need? Sex with a good witch to end the Iran crisis, the North Korea crisis, the Russia crisis? Apparently the technique worked then, in 1985 which is the time period of the film, as the world survived thanks, perhaps, to the machinations a small group of neurotic Swedes which included not only the sex (we don’t see much of that since the film is rated PG but don’t even think of taking your eight-year-old to see it) but a sacrifice made by the principal character. Alexander (Erland Josephson), in a Faustian bargain with God, agrees to give up everything, his house and all his possessions if the Almighty would save his loved ones.

The plot, though, takes a back seat to D.P. Nykvist’s capture of the bleak landscape of rural Sweden, here a Baltic island, a scene that makes the viewer understand instantly while Northern Europeans flock to sunny Spain whenever they get a chance. As the DVD from Kino Classics states, the film evokes an “arresting palette of luminous grays washing over the bleak landscape.” Characters are shot at first from a distance as in the absorbing opening scene featuring Alexander, a philosopher and critic undergoing a mid-life crisis as anyone living with his neurotic friends and family might. With his six-year-old mute Little Man in tow, he converses with Otto (Allan Edwall), a dour part-time postman and former history teacher. Even before the thunder erupts and military jets zoom over the remote island, the two despair.

Aside from the Bach aria, the picture is highbrow, throwing names around like Nietzsche, Gandhi and Jesus while capturing close-ups of Leonardo da Vinci’s “Adoration of Three Kings,” which causes the postman fear. And about the other neurotics: Alexander’s wife Adelaide (Susan Fleetwood) delivers a monologue to which some in the audience will relate, “I have loved one man and married another,” implying that Victor (Allan Edwall), a doctor, is having an affair with her but wants to chuck it all for a post in Australia “to get away from all of you.”

The postman, a bit of a mystic, sees that a Maria (Guarún Gísladóttir), a weird housemaid, is a witch and directs Alexander to bike out to her digs. And what woman can resist a seduction that promises salvation for the world if she would “lie” with the rich man? Well, he doesn’t exactly reveal her importance yet, delivering an impassioned monologue about how, in trying to bring order to his mother’s garden, he has destroyed natural beauty. To restore the natural order, you’ve got to see the real fire that forms a dramatic conclusion to the film. (In the Kino Lorber DVD we learn something quite interesting about the filming of this fire.)

Message alert: Science is destroying the world! And this movie was made before young people became addicted to the soul-crushing technology of the iPhone!

Stay with it. If you’re into Ingmar Bergman, you’ll have no trouble doing so. This is not middle-brown Woody Allen entertainment but a thoughtful tale with imagery superimposed on and even more important than dialogue. See it on the big screen as it has been updated to a new 4K restoration to play in several cities. The film is available on Blu-ray and DVD from Kino Lorber.