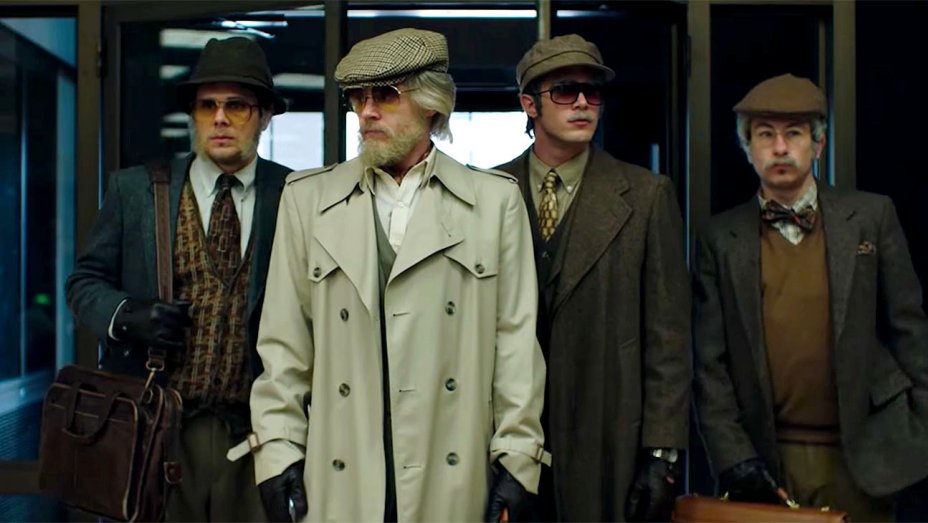 Whoever said that young men are not interested in books should see this movie. And if you think that a highly focused interest in birds is monopolized by women of a certain age who travel to remote destinations with high power binoculars, again: see this film. Four college students who like books do some traveling, though to no areas more remote than Amsterdam. They have a variety of temperaments as well. In fact they are so involved in acquiring a book, “The Birds of America,” by John James Audobon (1785-1851) that they are risking their careers and years of their lives to get it from a library. But this is not a book you can borrow with a card from your university. It dates back centuries and is said to be worth $10 million. The book seems too heavy for tucking under your winter coat, the planning by the collegians to take this book is amateurish, and these students for the most part are not in dire need of money. They want only to be special. They see the lives as replicas of their parents’, and given that they live in the red state of Kentucky they believe they are missing out, attending, as they, are the University of Kentucky and (I thought this was a joke), Transylvania University.

This is a bold entry into the indie world by writer-director Bart Layton, who you’ll remember for his “The Imposter,” about a young man who tells a grieving Texas family that he is their 16-year-old son who had been missing for three years. The doc received hundreds of critics’ reviews, a story whose thing resembles that of “Martin Guerre” and “Six Degrees of Separation.”

From time to time, the characters in “American Animals” return to the screen fourteen years after the heist to re-evaluate their plans. With the benefit of maturity they can admit what went wrong and perhaps even how at the time of the burglary they simply did not count on a few simple things. For example, where is the key that housed the Audubon masterpiece? How did they expect to fence the volume given that the art world would have heard of the theft almost immediately? But who cares? College kids just want to have fun, as we know from fraternity hazing rituals, though in this case, the only person hazed would be the librarian, Ms. Gooch (Ann Dowd), whose work consists largely of escorting groups of people into the inner sanctum of birding—and of Darwin, as that explorer’s first edition is locked up as well.

A wired Warren (Evan Peters), the most excitable of the quartet, turns on to the founder of the theft idea, Spencer (Barry Keogahn). They pick up two others, a student of accounting, Eric (Jaren Abrahamson) and fitness fan Chas (Blake Jenner). They work out a plan, filling up a wall with maps and charts, first going into the library disguised as old people (old people are next to invisible, one says). When that plan goes awry, they are about to give up and spend their lives as nobody special, but the next day, they are back in the field without disguises—after one of their number had gone to Amsterdam to deal with a fence.

Everything goes wrong, leading to some humorous interludes—as when the elevator they take from the main library building to the basement opens on the library floor instead of the basement, the thieves witnessed by scores of students. The minute-by-minute robbery in the special collections room is the subject of some humor as well. You may think that since these are young, impulsive men, if they are caught they may get away with a suspended sentence, and I agree. People generally do not become fully mature with a sense of ethics until their brains turn 25, and if the judicial community does not realize this, they may lock up perpetrators like these for a long time.

The actor who turns out the most mature of this immature group is the relatively calm Barry Keoghan whom you remember from his terrific job in what I think is the best picture of 2017, “The Killing of a Sacred Deer,” in which he plays a high-school student determined to avenge the operating table death of his father by going after the surgeon and his family. This film does not have the complexity of Yorgo Lanthimos’ work but with the blessings of fine editing and electronic music in the background, this should make us look forward to Burton Layton’s next project.