Entering the minds of several of society’s greatest innovators, who bravely strive to change the conversation surrounding the way communities view unique experiences, is a necessary occurrence in the effort to understand their motivations behind initiating diversity and advancements. Founder and CEO Erik Donley of the rising Los Angeles-based creative studio Telexist and Sam Gezari (who is no longer with the company) specialize in virtual reality (VR) and new media. The company aims to change how people view and explore content and the storytelling capabilities of VR.

Those advancements are being highlighted in one of Telexist’s latest projects, the sci-fi-thriller ‘Dinner Party.’ The VR drama chronicles America’s first widely known account of alien abduction story in the early 1960s, which was reported by interracial spouses. The husband and wife courageously overcame the then-taboo subject of their mixed-race family in order to have the public understand their harrowing incident.

‘Dinner Party’ is based on the true story of Betty and Barney Hill (Sarah Sokolovic and Malcolm Barrett), an interracial couple who reported America’s first nationally known UFO abduction incident in 1961. After their inexplicable nighttime encounter, the Hills sought hypnosis to recover memories of the experience. Against Barney’s wishes, Betty plays the tapes of their hypnosis sessions for their friends during a festive gathering. These tapes bring up the abductions from the couple’s memory, which forces the Hills, their guests and viewers to relive the occurance. What those tapes reveal will threaten Betty and Barney’s marriage and raise troubling questions about race and perception.

Angel Manuel Soto directed ‘Dinner Party,’ which was written by Charlotte Stoudt and Laura Wexler. Donley served as an executive producer, and Gezari worked as the cinematographer, visual effects supervisor and one of the producers, on the drama.

As a VR production studio, Telexist focuses on developing original content for interactive platforms. The full service creative agency has grown to include a team of over 20 technical artists and engineers. Driven by the need to innovate, Telexist aims to develop and produce content that pushes boundaries by exploring new applications and challenging the way audiences engage with this new medium.

Donley and Gezari generously took the time to talk about making ‘Dinner Party’ during an exclusive interview at this spring’s SXSW at Austin’s JW Marriott. The production studio executives, whose sci-fi project was one of 29 VR experiences that were featured in the festival’s Virtual Cinema space at the Austin hotel, spoke about the drama during the second day that their VR project was exhibited. The narrative VR thriller participated in SXSW‘s Virtual Cinema section after it had its world premiered at this winter’s Sundance Film Festival. Following its participation in the Austin-based festival’s showcase, ‘Dinner Party’ then went on to have its New York premiere at this spring’s Tribeca Film Festival.

ShockYa (SY): Erik, you served as an executive producer, and Sam, you served as the cinematographer, visual effects supervisor and one of the producers, on ‘Dinner Party.’ Why did you both decide to become involved in the project?

Sam Gezari (SG): The story’s so good. I think when we read it, we understood that it’s a really strong story. We also liked that it’s a period piece that has alien abduction in it, and it’s visually really exciting. It also had an existing foundation when we got it that allowed us to continue to build on it…So it fit all the things we were looking for, when it comes to the filmmaking process.

Erik Donley (ED): It also felt very relevant to a lot of other projects we were seeing in this sci-fi-thriller genre, like ‘Black Mirror.’ So it felt like the perfect project for us to work in this medium, and would be relevant to what people would watch on their TVs. So liking the supernatural alien genre drew me to this project.

SY: What was the process of working together as producers on ‘Dinner Party?’

ED: It was a challenge. Producing ‘Dinner Party’ wasn’t too different than producing a traditional film. Some things we had to think about where the main location, and how we could build this four wall set. This wasn’t going to be a set that could be moveable. So by doing that, we had to think about how we would fly the camera around.

So there were a lot of things we had to think about for a 14-minute piece. As a result, we had to work very closely with the creative team, and figure out what they were doing. We then had to discuss all of that with the post (production) team. We had to make sure that everything was on the right path until we got to post. When everything was in place, we looked at our final delivery.

Other than that, we didn’t have much production time for the overall project, so there wasn’t any room for the creative process in post. We went into the production knowing exactly what we wanted, so that when we got to post, we could easily execute it.

SY: How did you both decide how you would create the visuals that would be included in Dinner Party?’

SG: From the minute we take on developing these types of projects, we start thinking about the post-production process. On this particular project, we knew right away that we wanted it to be a single shot. When we first met with Angel, our director, the first thing that he even said was that he also wanted to make this project look like it was done in a single take.

The alien abduction sequences were based on the Hills’ accounts of their “real” experiences. The things that they described were things that we really tried to visualize and create for the viewers. That way, they could feel what Betty and Barney felt as realistically as possible. We also took some creative license that somewhat ventured away from the documentation.

By creating the single fluid camera movement, we allow the viewers to be taken from this period piece to the present moment and back into a flashback. So we connected time and space in this single motion. We’re allowing viewers to see things in a different perspective, which is very exciting.

SY: Following up on the experience of work with ‘Dinner Party’s director, Angel Manuel Soto, how would you describe your collaboration with him?

ED: Angel is a really fun person to collaborate with. Going back to what Sam said, during our first meeting with Angel, before we officially had the project, he had this idea of what he wanted…So when Sam pitched our idea of how we would shoot it, it was on for us. Other people told him that what he wanted may be too hard to pull off, but Sam was just nonchalantly like, “Let’s use the Technocrane.”

From that point on, I observed what appeared to be a pretty good partnership. We were able to put pressure on each other’s abilities. We didn’t have anyone shy away from being pressured into doing something challenging. If we said, “that’s a tough idea,” we’d still find a way to do it.

So we had a really creative team, and it was fun to watch everyone work. It was great to see that we all got along, and were able to make something great together. We were on such a tight deadline that if anything went wrong, I don’t know if the project ever would have made it to Sundance, which is where it first premiered.

SY: Speaking of the fact that Dinner Party’ premiered at Sundance, and that it’s now also playing here at SXSW, what has the experience of bringing the VR project on the festival circuit?

SG: It’s been a great experience. We’re still in the stage of VR that festivals are some of the best places to watch these projects. You get to see a lot of different content. As creators, we also get to have some control over how this project’s viewed, which allows us to make sure people have a better experience.

Both Sundance and SXSW have been good to us, and allowed us to get this project out there. They’ve also allowed us to talk about the filmmaking process, which is really exciting. That experience allows us to drive forward with more content and new narratives.

ED: The festivals have also allowed us to see who else is creatively in this space. They allow us to find more people who are like us. Everyone in that (Virtual Cinema exhibit) room is definitely a pioneer, and are showing things that weren’t even around a few years ago. So it feels like we’re in our own little club, and are put in a room together to show this medium on a large scale.

SY: ‘Dinner Party’ features Sarah Sokolovic and Malcolm Barrett as Betty and Barney Hill. What was your overall involvement in the casting process, and your interaction with the actors?

SG: The casting is a testament to Angel; he found the best actors to fill the roles in this unique project. In traditional filmmaking, the camera is on specific actors, and they have certain lines to say. The camera then cuts to someone else.

One of the key elements of VR is that the viewer can move their heads to see different angles of what’s going on, and not just focus on the main action. So with this project, all the actors had to consistently nail their marks and say their lines. Even the actors who weren’t directly in front of the camera still had lines and had to perform and be in character during the entire course of the shoot.

With VR, the actors’ performances have to be realistic, as viewers can see everything all of the time. So it’s easy for the actors to think about that process, but it can be difficult for them to actually perform that way. So Angel had to write a bunch of dialogue and create actions that didn’t initially exist for the supporting characters, in order to help the actors focus.

Since the viewers can be looking at the other side of the room, where the main action isn’t taking place, everything has to be part of the story. That helps us as filmmakers think about the editorial and filmmaking process. 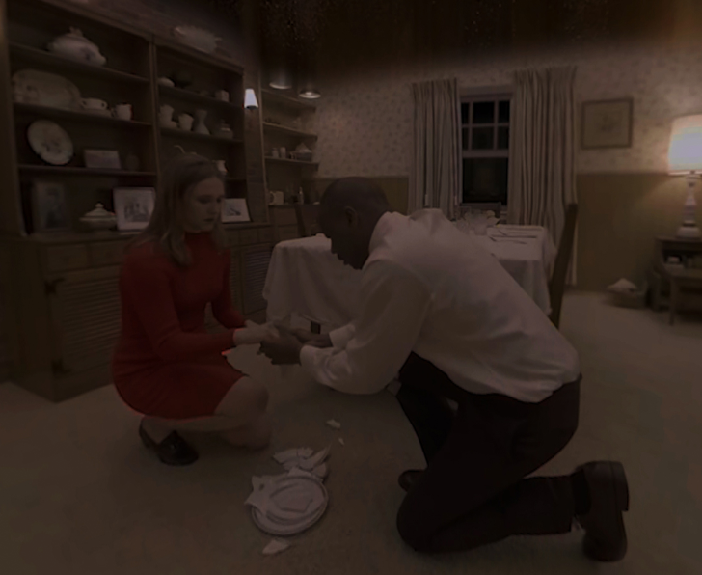