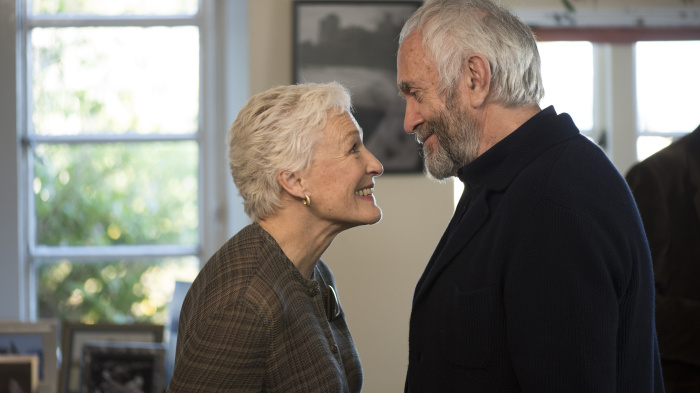 In one scene, Joe Castleman (Harry Lloyd), a writing professor at Smith College during the late ‘50’s is advising Joan (Annie Starke), a student, about a story she submitted to him. Surprisingly, he then asks young Joan for her opinion of a story that he wrote. After some hesitation and allowing time for some white lies, she admits that she thinks his characters are lifeless, inauthentic. She, a mere student, suggests that she can edit the tale to animate its dramatis personae. He agrees. Therein lies the story line of Björne Runge’s film. Runge, the Swedish director, is in his métier. Consider that his previous movie, “Happy End,” deals with people whose anxieties lead them to obsess that some miracle will occur that would end their need to prevaricate.

The plot itself is nothing extraordinary, though it takes place among the intelligentsia, in fact a satire on literary pretensions. What’s amazing instead are the two principal performances from Glenn Close and Jonathan Pryce as an elderly couple, Joan and Joe Castleman. Glenn Close plays a fully fleshed-out woman who displays just about every emotion known to human beings, one feeling’s superseding the next, some emotions obvious from the situations, others of the kind that are so unexpected that you’d think that the plot has the twists of a thriller. She is a furious woman, full of repressed rage, and yet during the moments that find her calm and orderly, such as when she is laying out the pills for her husband’s blood pressure, you can feel the seething going on beneath. If somehow Joe cannot sense this, he may be too narcissistic, too much in denial about the contributions made by his wife toward his successful literary career. As for her own options, she has given up trying to write as she believes—and as Elaine Mozell (Elizabeth McGovern) agrees—that if you’re a woman in a literary world shaped by male editors and publishers, your books will line shelves unread.

When Joe gets a call from Stockholm telling him that he is the winner of the year’s Nobel prize in literature, he is so excited—as is his wife—that the two jump up and down on their bed like a couple of pre-teens at a pajama party. If Joan has done more than simply an edit job on Joe’s novels, only their son David (Max Irons) would know, since his parents would barricade themselves in a room for eight hours at a time, ignoring David’s needs to the extent that the young man has been hostile, irritated, argumentative, a brat, and would several times lash out at his father to the older man’s puzzlement.

We become privy to what happens when a Nobel prize is won. First Joe, Joan and David board a plane to Stockholm, as Joe badgers David about the son’s smoking and is treated with equal hostility by David, who abhors his father’s “stuffing your face with animal fat.” During the journey, Joe is badgered by Nathaniel Bone (Christian Slater), who has deliberately booked himself onto the flight to pursue his motivation to write Joe’s biography. If Joe is unimpressed, it could be because he has something big to hide. Does he ever!

Though during his speech upon receiving the Nobel he praises his wife to the sky, she is so infuriated that she stomps out of the hall. Now, would you do such a thing if a celebrity smothered you with kudos? It turns out that she has been damned with faint praise (in the immortal words of Alexander Pope) because given a different political situation in America, she could have been a Nobel recipient herself instead of the little wife who is taken on a shopping tour by her Swedish handlers.

Joe’s writing and Joan’s “editing” (actually re-writing) have given them material comforts, a solid middle-class life, their daughter about to have a baby and their son as angry as his mother though with no intention to hide his frustrations. Joan has been her husband’s support throughout their marriage, living with the knowledge of his affairs (in fact he had left his own wife and baby way back to marry Joan). In the film’s most dramatic confrontation, Joan lets loose, unfolding decades of repressed rage caused not only by her husband’s lack of insight and narcissism but by the male domination of the literary industry. She blames both for her own lack of achievement. (There is a similar argument coming from some film critics who are concerned that, in their view, 65% of us are white males in a field that should become as diverse racially, ethnically, and gender-wise as the movie-going public.)

Joan Castleman has been an enabler, a woman who deserved more, has spent her life supporting her man’s career, while her husband does not have enough class to advise his own son gently about the young man’s own writing. That she is not yelling at the top of her lungs and threatening to leave the family throughout the movie indicates the restraint that her character has shown when she might have been concentrating on her own career and breaking through the male-dominated industry. Her kaleidoscope of emotions is testament to the skills of a magnificent actress whose résumé includes movies and TV appearances since 1975, one best known perhaps for her role as Alex Forrest in Adrian Lyne’s “Fatal Attraction.” Alex Forrest, however, is a one-dimensional, obsessed person who wants only to consummate her passion for a married man. But as Joan Castleman the seventy-one year old actress may have given the performance of her life.