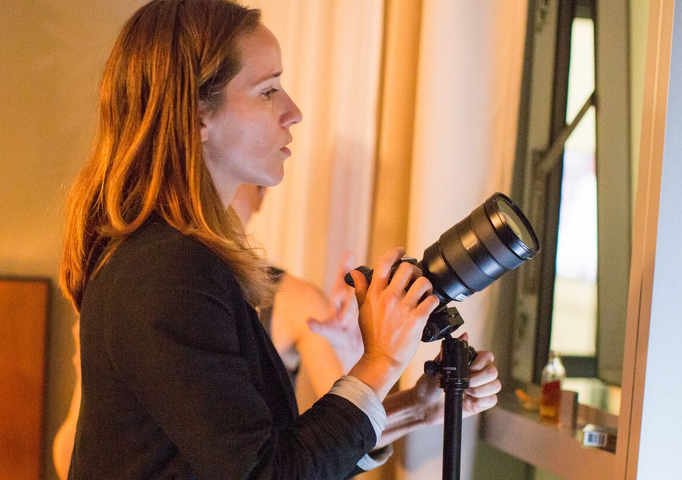 On set with writer-director Meredith Danluck from the thriller, ‘State Like Sleep,’ a film by The Orchard. Photo courtesy of The Orchard.

Sometimes creative people are compelled to draw from their own personal experiences in order to find the vital answers to life’s most important dilemmas and questions. That’s certainly the case for writer-director Meredith Danluck, who reflected on her own past living in Brussels, particularly her process of grieving, to craft the story for her new movie, ‘State Like Sleep.‘

The filmmaker created a fictionalized version of some parts of her history in the Belgium city for the drama, in an effort to contend with her overwhelming feelings of complicity and guilt, after losing someone close to her. She masterfully looked outside herself for answers and explanations, and penned a story that helped her make sense of what happened.

Set one year after the mysterious death of her Belgian actor husband, ‘State Like Sleep’ follows American photographer Katherine (Katherine Waterston) as she returns to Brussels, a city filled with memories of the life she’s tried to leave behind. Their marriage was rocky, but Katherine’s return to the city forces her to finally confront her grief as she packs up the flat they once shared. In doing so, though, she discovers a web of secrets that propel her to probe the circumstances of her husband’s last days.

Following in his footsteps, Katherine plunges into Brussels’s underground club scene, where she encounters a mysterious woman and a secret group of friends. At the same time, she meets Edward (Michael Shannon), a fellow American, who offers the possibility of a new future as she comes to terms with her troubled past.

The Orchard is distributing ‘State Like Sleep’ on Digital and On Demand today, as well as in theaters this Friday, January 4. The official theatrical and home releases come after the movie had its world premiere during the US Narrative Competition section at this past spring’s Tribeca Film Festival.

Danluck generously took the time to sit down for an exclusive interview at STX Downtown in New York to discuss writing and directing ‘State Like Sleep’ during the Tribeca Film Festival. Among other things, the scribe-helmer discussed how when she set out to create the project, she drew inspiration from her own personal emotional truths, in an effort to create a real and relatable story. She also mentioned that she was elated to premiere the thriller at the New York-based festival, especially along with so many other talented female filmmakers.

The conversation began with Danluck explaining why she was inspired to pen the script for ‘State Like Sleep.’ “I had just finished working on a more experimental project, which was a four-screen feature narrative (‘North of South, West of East’) that showed at Sundance in 2013. Coming off of that, I was really sure that I was ready to make a more conventional film that would play on one screen.

“So I started thinking about all of these different ideas, most of which were terrible,” the writer admitted with a laugh. “Then, in the middle of the night, I received a phone call that my mom was in the hospital in Brussels. So I flew to Brussels, which is where I used to live, but had kind of abandoned my life there in tatters. So I was confronted by not only a devastating situation with my mother, but also with a situation from my past,” she also divulged.

“After I finished working with Ben Foster on ‘North of South, West of East,’ I was talking with him a lot,” Danluck shared. “He said the best movies come from real emotional truths. So he suggested that I just start writing things down. So I started writing down little details about a room or hotel I had visited, as well as dialogue that I had thought was interesting. From there, I really built the script.”

But the filmmaker wouldn’t necessarily call ‘State Like Sleep’ an autobiographical story. “There’s a difference between grounding a story in emotional truth, or pulling details or characters from your life, and writing a straight autobiography. The movie’s pure fiction, but there is truth within that fiction,” she emphasized.

With a laugh, Danluck then called the experience of transitioning from being the drama’s writer to its helmer “awesome! I’ve been a director for a long time, but in different capacities. So making this movie wasn’t a big departure from my previous work, but it’s the biggest project that I’ve done, up until this point. It’s also received the most support out of all of my projects. That was the most remarkable difference between what I had previously done and this production.

“I was surrounded by such great people, including my DP (Director of Photography, Christopher Blauvelt) and my actors. They’re on the same team, which helped create an incredibly collaborative and creative environment,” the filmmaker divulged.

Then further delving into the cast that appears in ‘State Like Sleep,’ Danluck explained how the actors became attached to the thriller. “Katherine Waterston was the first actor to read the first draft of the script. She and I have a mutual friend, and he past the script onto her. Katherine and I then started an email correspondence. Years later, it came together. So Katherine was always in the back of my mind for the character, who I named Katherine before I met the actress. It was just a pure coincidence that they have the same name!,” the director noted with a laugh.

“With Michael Shannon, I saw him on a talk show, and he was so funny and charming. He had a really appealing quality that I had never seen in him in any of his previous movies,” Danluck admitted. “In his movies, he usually plays psychos, which he’s great at doing! So I thought, wow, he’s so charming. How would it be to have him in this film? Luckily, he has a really amazing agent, who also saw that he could play this role. Thankfully, his team was really supportive. When we met, I thought, I love Michael Shannon!”

When Shannon signed on to play Edward, the filmmaker didn’t have much time to rehearse his scenes with him. “But we spent a lot of time together, talking about life and the characters. I feel like we developed a shorthand, just as human beings. So by the time the shoot began, I felt like we were very familiar with each other, and were able to communicate really fluidly,” Danluck shared.

“With Katherine, she lived with the character for so long. But she was shooting ‘Alien(: Covenant)’ up until about two days prior to when she landed on our set,” the helmer revealed. “So we had no time for rehearsal. But that didn’t really matter, because she already knew the character so well.”

Danluck then delved into the experience of shooting ‘State Like Sleep’ on location in Toronto. “We found great production partners in Toronto, which enabled us to make the movie at the level that we wanted to make it at. There are great incentives, and a great production infrastructure, there, which we were able to take advantage of during the shoot.

“But Toronto substituting for Brussels was a challenge. But luckily, we had great locations and production design, so we were able to make it work. But there were some things that we couldn’t make work in Toronto, so we shot for a few days in Brussels proper,” the filmmaker revealed. “But Toronto was great, and I would definitely shoot there again. But overall, it’s easier to shoot in the story’s actual location. If you’re shooting somewhere that’s supposed to stand in for another place, you have to figure out how you’re going to shoot some things.”

The experience of premiering ‘State Like Sleep’ at the Tribeca Film Festival was also thrilling for Danluck. “I’m so proud to be a part of this year’s Tribeca, because I think it’s very different this year. There are so many movies that I’ve been following, and am excited to see premiere here,” the helmer shared.

Danluck added that “There are a lot of women directors in the lineup. But that didn’t sink in until the other day, when someone sent me a press clipping that said, ’10 must-see movies from Tribeca.’ There were also pictures” of women whose movies were scheduled to appear at the festival, including “Katherine. All four of the movies that were pictured were made by women. It then dawned on me that this is a completely revolutionary moment in history, and I’m a part of it. I’m so overwhelmed with pride to be a part of this particular moment in the festival this year, with all of these incredible directors, who are women. I’m stoked!,” the filmmaker added with a laugh.