Retirement isn’t always as easy and carefree as everyone hopes and expects it to be throughout their careers. That’s certainly the case for actor James Badge Dale’s protagonist in the crime drama, ‘The Standoff at Sparrow Creek.’ The chilling movie, which had its World Premiere at

In celebration of ‘The Standoff at Sparrow Creek’s home release, Shockya is offering three lucky winners a DVD of the thriller. To enter, email us at ShockyaGiveaway@aol.com. Let us know that you’re entering to win the ‘The Standoff at Sparrow Creek’ DVD giveaway in the email’s subject line and message. You have until March 5, the day of the drama’s home distribution, to enter, and you can enter the contest once daily. On March 5, we’ll pick the winners at random, and notify them through email. Good luck!

‘The Standoff at Sparrow Creek,’ which was released in theaters on January 18, was written by Henry Dunham, who also mad his feature directorial debut on the movie. In addition to Dale, the film also stars Chris Mulkey (‘Captain Phillips’), Brian Geraghty (‘Chicago P.D.’), Robert Aramayo (‘Game of Thrones’), Patrick Fischler (‘Twin Peaks’), Happy Anderson (‘The Knick’) and Gene Jones (‘The Hateful Eight‘).

RLJE Films will distribute the thriller on DVD for an SRP of $27.97, and on Blu-ray for an SRP of $28.97. Both discs will include the following bonus features: The Making of ‘The Standoff at Sparrow Creek’ and a photo gallery.

The following synopsis for ‘The Standoff at Sparrow Creek’ has been unveiled by RLJE Films:

After a shooting at a police funeral, reclusive ex-cop Gannon (Dale) finds himself unwittingly forced out of retirement when he realizes that the killer belongs to the same militia he joined after quitting the force. Understanding that the shooting could set off a chain reaction of copycat violence across the country, Gannon quarantines his fellow militiamen in the remote lumber mill they call their headquarters. There, he sets about a series of grueling interrogations, intent on ferreting out the killer and turning him over to the authorities to prevent further bloodshed. 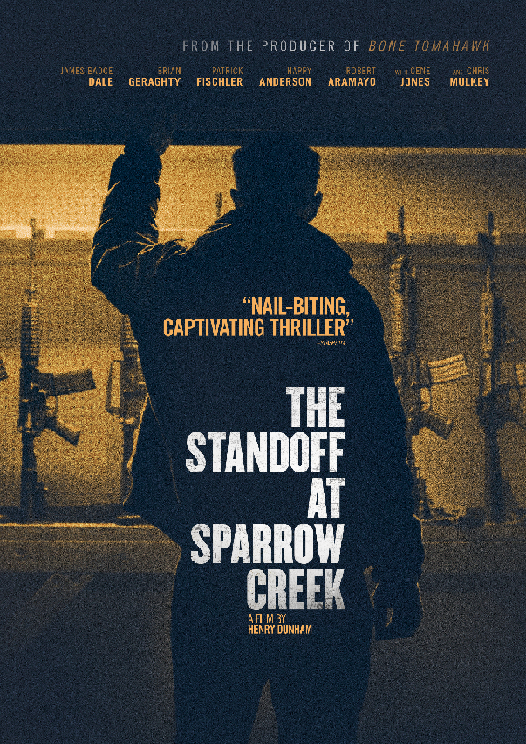