Over a year after the legalization of recreational marijuana in California and the industry continues to find new ways to experience cannabis. One forerunner of pot innovation, the CBD company SwissX, has launched a members-only club and lounge on Hollywood Boulevard that folds its signature CBD products into an exclusive musical, visual, and social experience.

For its Saturday grand opening, the club—which occupies the FilmOn Hologram USA theater—invited rap prodigy Lil Twist for a smoke out-concert double feature, hosted by musician and celebrity Ray J, dubbed “The Lil Twist Experience.” Fans of the musician were treated to the premier of tracks off his long-awaited album, Young Carter 2.

“It’s going great, I’m having an amazing time. It’s been fun since I stepped in the building. I’m actually premiering my new album, Young Carter 2, and I have a lot of close friends in the industry, a lot of family here,” Lil Twist said during the event.

If club-goers were surprised by what they found at 6656 Hollywood Blvd., they shouldn’t have been. A promotional video posted to Lil Twist’s Instagram a day before the event foreshadowed the almost-surreal vibe, previewing an odd mashup of music videos, cartoons, and footage from the club itself. The night itself had a similar feel to it, starting with a hologram interview and roast with Lil Twist conducted by Alki David, the owner of SwissX and Hologram USA. (For some insight into David’s persona, the show’s promotional material describes him as “Eccentric Billionaire,” a descriptor he appears to embrace with relish).

While club guests chilled in the theater—a large, high-ceilinged black room with plush leather chairs, fluorescent cocktail tables, and a stage at the front—Lil Twist and David materialized on stage in hologram form, sitting in royal blue, dome-backed chairs. The rambling, at-times cantankerous exchange could be heard over the speakers even though the two were in a separate room in the building.

Alki grilled Lil Twist: “So your not Muslim and your not Rastafari [sic.]—”

Twist cheated to the camera, seemingly looking out to the audience (as a hologram). “Somebody call the label,” he chirped.

But even while David pushed against boundaries in the interview with Twist (an approach he has earned a reputation for), both Twist’s and the venue’s mood remained chill—in large part thanks to the ample volumes of SwissX products circulating throughout the crowd. The club features two CBD bars where attendees can grab a variety of high-end CBD products: oils, capsules, tinctures, smoothies, chocolates, and even CBD joints.

SwissX only unveiled its joints last year in an event hosted by Tommy Chong, yet the company continues to introduce new variations and options. 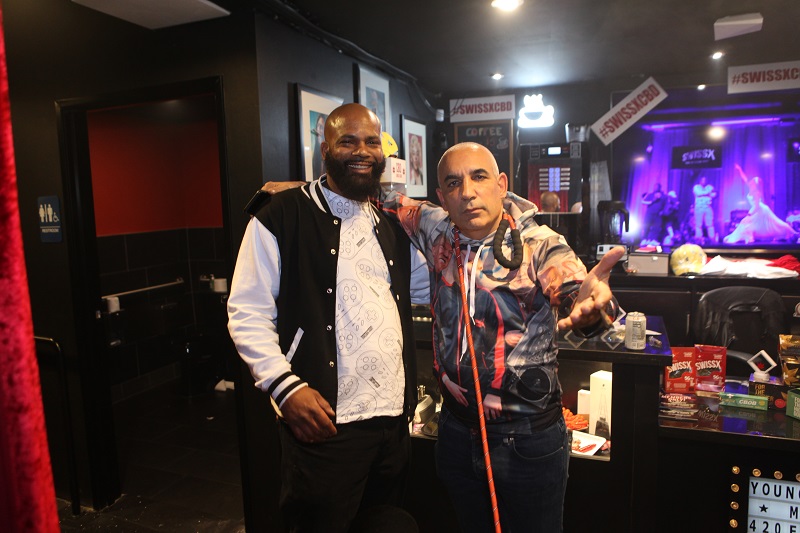 While the joints contain zero percent THC, the psychoactive compound in cannabis, they nonetheless have proved themselves just as capable of shooting the minds of its users into the stratosphere (see: Tommy Chong). On Saturday, SwissX revealed the fruits of its R&D with new joints, some reaching jaw-droppingly absurd sizes.

“I love SwissX,” Lil Twist said. “As soon as I met Alki, he put me onto everything that he’s been doing and I think that SwissX is a great brand. I actually smoked it when I had a headache and my headache went away.”

As for David himself, he broke the cardinal rule of all drug purveyors—don’t sample your wares. When asked about the success of the event, he replied, “I forgot what happened.”

“It was obviously a good night,” he reflected.

The event attracted a bevy of talent and celebrity along with Lil Twist and Ray J, including legendary hip hop artist Fatlip, who DJed a set at the event, rapper and fashion maven Dana Dane, and rap star Trippie Redd.