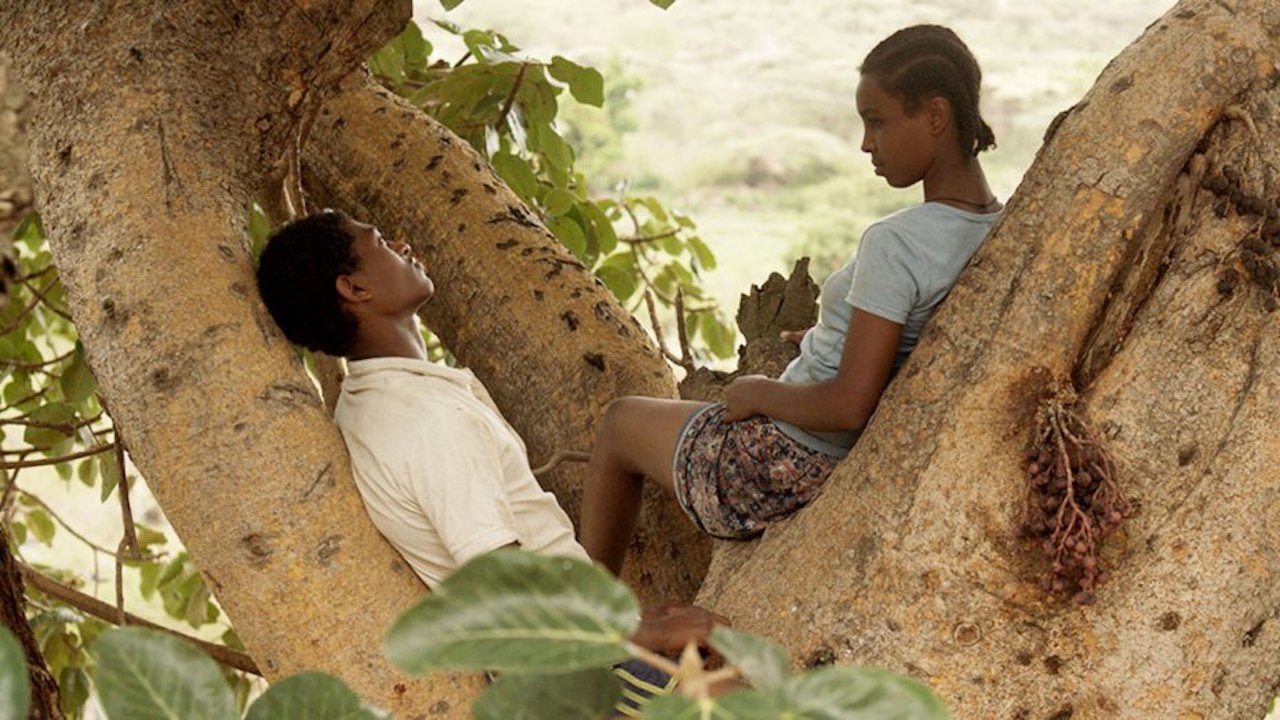 No sooner has the film advanced past the opening credits when someone in a hell-hole of a town outside Ethiopia’s capital Addis Ababa says, “Everyone wants to be Jewish.” That’s something you don’t hear every day, but it was probably quoted in one way or another in the Soviet Union when in 1989 a record number of that country’s Jews left for Israel and the United States. Some Russian Christians, not particularly pleased with the travel limitations of their Communist government, discovered that by declaring themselves to be Jews they can not only be let out but can be taken in and treated well by the Jewish state. A situation in presented itself in Ethiopia during its long civil war between a Communist government that took power after a coup ousting Haile Selassie and various guerrilla groups. Both sides in in 1989 were kidnapping men between the ages of 15 and 30, conscripting them into their armed divisions. In that background Mina (Betalehem Asmamawe), a feisty 16-year-old staying with her weaver grandmother (Weyenshiet Belachew), both lives for the moment, giving herself over to horseplay with her long-term boyfriend Eli (Yohanes Muse), and looking forward to spending her life with both her grandmother and Eli in Israel once the fluctuating flight schedules allow them to finalize their plans.

Two big questions arise. There are risks that Eli faces when military units without advance warning could snatch the young man up and make life unbearable, which is at least the perception of a young woman like Mina. The other is that like her grandmother and like her mother who is already in Israel, Mina is Jewish. However Eli, adopted into Mina’s family, is Christian. Mina fears that once the equivalent of a Mexican coyote who has pocketed money that Eli would be left behind, as Mina is instructed to take flight with her grandmother first.

Time passes, military units occasionally causing anxieties such as by forcing a school’s principal to hand over the list or male students, but a climactic point arrives when Mina and Eli discover a legless soldier (Tilahune Asagere) hanging from a fig tree in a patch of land that Eli uses to hide from the military. They save the man, who takes his time becoming conscious, and we see him as a metaphor for the whole mess that faces the country. The area is wracked by fear to such an extent that we may be surprised at the good will of the two young people when shortly thereafter the soldier crawls away, collapses, and is ignored by passersby.

The bulk of the film is slow-moving and is based partly on the experiences of the writer-director, Aäläm-Wärqe Davidian who left Ethiopia when she was eleven. The languid pace makes the climactic moments, when all tensions burst in an array of frantic activity, all the more riveting. Still, considering the unhurried rhythms that last for the major parts, more exposition in the opening minutes could have better clarified the theme.

In the seventies and eighties Israel gave itself lots of credit, deservedly so, for taking in so many Ethiopians, a surprising decision since—as we learn from Eliran Malka’s film “The Unorthodox”which opens one day before this one at Manhattan’s Jewish Community Center—the ethnically European Ashkenazis were not exactly welcoming of their fellow Israelis of Middle Eastern origin. “Fig Tree” does give us the tensions surrounding both the civil war and the desires of Ethiopian Jews to get out of their country leaving everything behind, but should be seen as well for the terrific performance of Betalehem Asmamawe, a non-professional performer in her first role.

Daniel Miller filmed on location in Ethiopia. “Fig Tree” is upcoming at the Israel Film Center Festival and played at the Toronto International Film Festival.