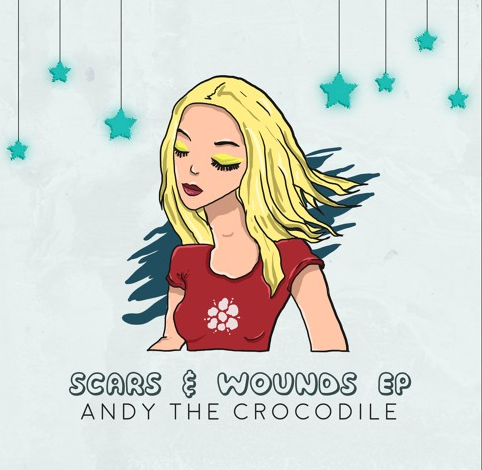 Offering an artful look into the ways in which people leave enduring marks on the lives of those they care about isn’t always an easy feat. But singer-songwriter Anand Manivannan, who professionally performs under the stage name Andy the Crocodile, effortlessly does just that with his new debut EP, ‘Scars & Wounds.’ The contemporary indie pop-driven album, which was released on June 8, does just that, as it uniquely blends such diverse genres as ’40s jazz and ’70s hard rock together across its five intriguing tracks.

The India-based producer-multi-instrumentalist crafted a cohesive journey throughout the record that thrives on the relationships with the people in his life who he has never outgrown, and have left a mark on his soul. Manivannan also indulges on the fact that he has been cursed with the scars from those connections that echo through his dreams and meditations in his life, but he’s also blessed with the memory of being touched by an angel.

After seven years in production, ‘Scars & Wounds’ opens with its lead single, ‘Hope,’ whose music video is now available. The song immediately showcases how Manivannan has taken inspiration from such such diverse artists as Jimmy Page and his guitar jolts, the rich harmonies of Jason Mraz and the pop melodies of The Beatles. Beginning with a transcendent melody of gentle ukulele electric guitars that feature a tropical flavor, the pop-rock tune soon highlights Manivannan’s unique alternative-folk vocals, as he encourages people to have hope. The mellow and relaxing entry features dynamic, uplifting and soulful melodies that will surely inspire listeners to not be afraid to live out their dreams.

The first single from the musician’s recently released EP then transitions into its sophomore track, ‘Sleep Well My Child,’ which is a thought-provoking and emotional take on a child’s soothing lullaby. The meaningful, poignant song features soulful arrangements of the guitar, ukulele and keys that accompany Manivannan’s beautiful, mesmerizing and soothing vocals. He warns his audience to take life slowly while they embrace their relationship, and be confident in the path they choose to pursue.

The middle entry on ‘Scars & Wounds’ is ‘The Whammy Girl,’ whose production inspired his stage name of Andy the Crocodile. The musician struggled to execute a guitar solo when recording the song, before he realized that a 1.5mm deus ex machina could unlock his technique on the instrument. His friend lent him a thicker pick that was emblazoned with the Dunlop alligator, which Manivannan mistook for a crocodile. The revelation compelled him to adopt the later reptile as his moniker.

‘The Whammy Girl’ truly showcases the singer-instrumentalist’s true musical abilities, as it opens with a traditional folk-country-Americana vibe on his vocals. It then delves into electrifying hard rock guitar, bass and rhythmic drums solos, and that provocative instrumentation rivals the musicality of Led Zeppelin. The track’s wide range of soaring instrumentals and vocals sound as though they belong on commercial radio stations from the early aughts, as it’s a notable attempt to introduce his unique blend of rock, jazz and folk music to the world.

‘Scars & Wounds’ penultimate entry, ‘Just Another Love Song,’ features a similar quality to ‘Sleep Well My Child,’ as it includes enthralling elements of the ukulele and acoustic guitar, which sentimentally accompany Manivannan’s emotional vocals. The simple arrangement has a vulnerable, melancholy feeling that helps drive the striking acoustic melody and somber overtones. The singer emotionally admits that he embraces his love for the woman in his life, and will never forget their memories together in his heart and soul. The rich harmonies from the backup singers sound like an old-fashioned barbershop quartet, while the guitar riffs often call to mind the raspy swagger of Page. ‘Just Another Love Song,’ then transitions into the album’s spellbinding final song, ‘The Whammy Girl (Radio Edit),’ which further highlights his unique musicality.

Offering a soulful look into the ways in which people leave enduring marks on the lives of those they care about isn’t always an easy accomplishment. But Manivannan effortlessly does just that with ‘Scars & Wounds.’ The contemporary indie pop-driven EP exceptionally blends such diverse genres as ’40s jazz and ’70s hard rock together across its five extravagant tracks. The tunes expertly highlight how the musician has indulged on the fact that he has been cursed with the scars from his relationships that echo through his life, but he’s also been blessed with the memory of being touched by an angel.