Automotive fans across North America can rev up their engines as summer winds down, while they celebrate both their loves of cars and support of their working class. Beginning this Friday, August 30, MotorTrend TV will offer audiences in the U.S. and Canada the ultimate ‘Top Gear’ collection exclusively via its app for its television network.

In honor of MotorTrend TV also offering unprecedented content to its famed motor reality series, ShockYa is premiering an exclusive clip from an upcoming episode. The clip features Cristy Lee from one of the network’s other reality shows, ‘All Girls Garage,’ as she introduces a legendary segment from the 14th season of ‘Top Gear.’

With MotorTrend TV bringing the ultimate ‘Top Gear’ collection to its app, subscribers will have access to more than 240 hours of programming, including ‘Top Gear’ select compilation episodes, specials and related content. The network will also be devoting three nights of prime-time to a ‘Top Gear’ takeover with Discover Channel simulcasting the coverage this Saturday, August 31. Additionally, starting on September 3rd, the MotorTrend app will add to its ‘Top Gear’ collection every Tuesday, with new episodes of the ‘Best of Top Gear’ and ‘Top Gear UK’ specials.

The MotorTrend TV app is available for Prime Video customers in the U.S. on Prime Video Channels and on Amazon FireTV. The app is also obtainable on other media players and streaming devices, including the newly announced Facebook video subscription service, Apple TV, Roku, Google Chromecast and on the web, as well as across iPhone, iPad and Android mobile devices.

“Our marriage with the ‘Top Gear’ franchise is made in car heaven,” said Alex Wellen, global president and general manager, MotorTrend Group. “As the leader in automotive entertainment, MotorTrend is excited to embrace the world’s #1 automotive entertainment show, and to bring fans greater access to ‘Top Gear’s unique stories and larger than life personalities. We encourage everyone who enjoys humor, adventure, travel, speed and, of course, some truly cool cars to join us on this unique ride.” 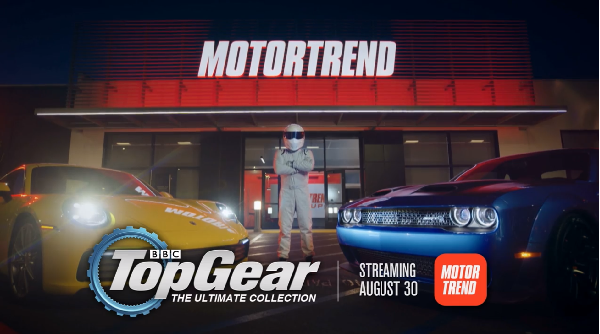