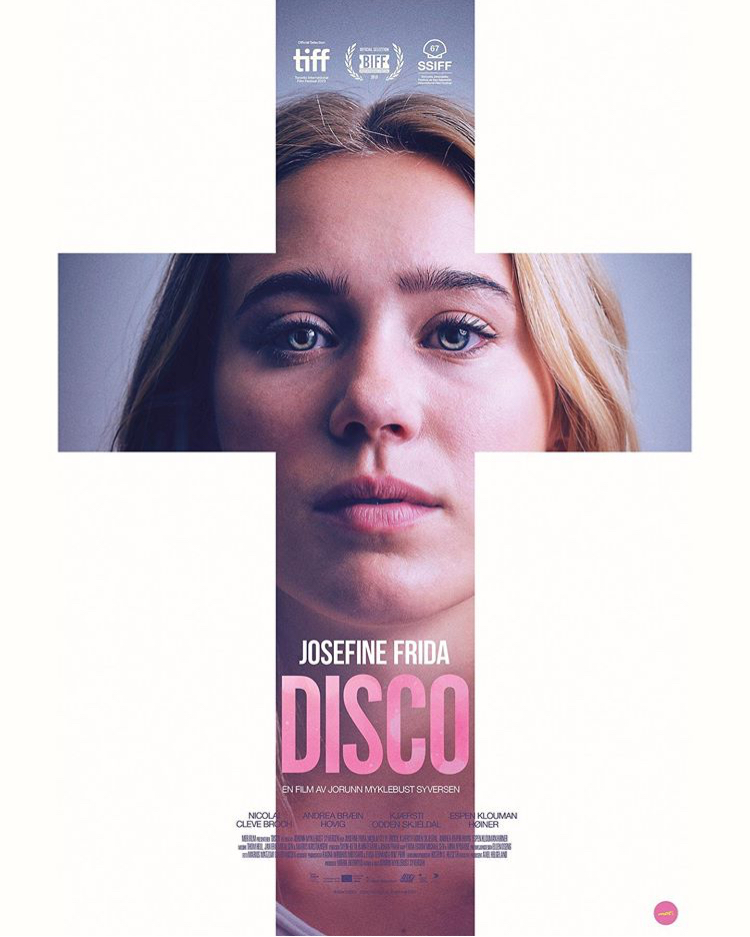 A leader’s natural charisma and use of persuasion can easily create an all-consuming, impenetrable environment that influences their followers to remain unquestionably loyal to them. But when even one person begins to doubt their faith and commitment to the community, everyone in their life will be led down an equally powerful physical and emotional journey that will forever change their lives. That pilgrimage is powerfully explored through the young protagonist’s coming-of-age passage in the new drama, ‘Disco.’

The movie’s main character, Mirjam, a Christian champion dancer who’s played by TIFF 2019 Rising Star, Josefine Frida Pettersen, begins to falter, so her family questions her faith, and prompts her to search for more radical solutions. Mirjam’s emotional internal and external searches for answers are explored in ‘Disco,’ which is the second feature from writer-director, Jorunn Myklebust Syversen. The profound exploration into the structure of contemporary Christian cults, and the varying effects they leave on all of their members, is highlighted in the drama, which had its World Premiere earlier this month at the Toronto International Film Festival (TIFF).

‘Disco’ looks at contemporary Christian cults through the eyes of teenager Mirjam. Opening during a dance championship, where Mirjam is favored to win, she begins to feel the effects of the mounting pressure, and starts to question her place in the competitive world. Her stress builds because the atmosphere isn’t about the pleasure of dance or movement or the music; it’s about frenzied sexuality and the various competitors’ desperate need for approval. Mirjam’s need is stoked by her mother, Vanja (Kjaersti Oden Skjeldal), whose brother is a very prominent pastor, and her stepfather, Per (Nicolai Cleve Broch), who runs the Norwegian megachurch she essentially competes for, Friheten (The Freedom).

When the stress finally gets to Mirjam and she begins to lose competitions, her elders don’t seek to reassure her. They instead blame it on her lack of faith, a devastating accusation considering virtually every second of her day, from the television shows she watches to the podcasts and music she listens to, is dominated by religion. As Mirjam’s control and confidence slip away, she searches for more radical solutions.

Syversen generously took the time to sit down at the TIFF Bell Lightbox in Toronto during the festival to talk about writing and directing ‘Disco’ during an exclusive interview. Among other things, the filmmaker discussed that she was drawn to pen the script for the drama because she wanted to explore the imbalance of close relationships in the enclosed religious environment that Mirjam lives and works in. The scribe-helmer also expressed her gratitude for the movie having its world premiere at TIFF, as she feels that it’s important to share this type of story with an international audience, especially when people of all cultures can recognize themselves in the story and characters.

ShockYa (SY): You wrote the script for the new drama, ‘Disco.’ What was the inspiration in penning the screenplay for the film?

Jorunn Myklebust Syversen (JMS): I had an interest in enclosed environments, and the relationships between people. I also wanted to explore the imbalance of those close relationships. I thought the religious groups were a strong image to explore, and I wanted to see what kind of structures there are around this kind of religion. I don’t want to criticize personal faith, but I do want to investigate this type of religious structure.

I also discovered this disco lifestyle in Norway about 10 years ago, and I became so fascinated by it. I used to work as a contemporary artist, through photography, so I took pictures and videos of this culture. I think the aesthetics are both so wild and hysterical, in a way. So this was an extreme environment that I wanted to explore.

SY: What was the research process like into Christian cults while you were working on the script?

JMS: That process was really important to me. I strove to portray this type of environment as authentically as I could. So I initially went to different churches within the Pentecostal environment, and I found a lot of different directions.

I also spoke to people who aren’t in the congregation anymore, and broke off from their family. I found some heartbreaking stories, because there’s a lot of physical and mental abuse towards children.

SY: In addition to penning the screenplay, you also directed the movie. How did working on the script influence the way you approached helming ‘Disco?’

JMS: Directing the film was kind of intense during our shooting period. But for me, it was so nice. I like to write after I cast my actors, and find the environment. For me, that’s the perfect preparation; I can write about, and develop, my characters through meeting my actors, as well as finding the places we’re going to shoot.

It was really great working with Josefine Frida Pettersen; she’s a really special actor, and has a lot of sensibility. She has a really unique presence, and is really good with the other actors-she listens, and tunes into them, as well as the camera, in each situation.

SY: Speaking of Josefine and the rest of the cast, once the actors signed on to star in ‘Disco,’ what was the process of working with them like to create their characters?

JMS: I spoke a lot with Josefine, and we got to know each other really well. It’s so important to work with trust, which is our greatest tool on set. With trust, everyone can feel really comfortable, especially on this movie, because the subject is so dark. For her, it was a really intense experience, both physically and mentally. It was really important to me that we knew the source of the project, so there was a lot of development.

With the other actors, they had less screen time, so they had less preparation. But it still worked out nicely with them; they’re so professional, and I admire them. We had a really special team, and everyone put their heart into the project.

SY: You just mentioned that for Josefine, making ‘Disco’ was a really intense experience, both physically and mentally. What was the experiences of working with her to create the physicality for her character of Mirjam?

JMS: Well, Josefine had to train; we found the best dancers in the world to help her do that. In Norway, freestyle disco dance is quite popular, so she worked with world dance champions and trainers.

SY: ‘Disco’ is having its World Premiere here at the Toronto International Film Festival. What has your experience of bringing the movie to the festival been like?

JMS: I think it’s such a great festival and town, and I’m enjoying myself a lot. At first, I was really nervous, of course, to show the film here. But I love everything we’ve done to show it, and the audiences have been so invested in the story. It’s been really nice meeting with the audiences, and they’ve been asking clever questions.

I was moved by a girl who thanked us for making the film, because she lived like this, and been in this situation herself. That reaction stayed with me, because I’ve spoken to a lot of people in this environment during the development of the film, but her story really stuck me.

I know it’s important to tell this type of story, especially when people can recognize themselves in the story and characters. I’m so grateful for that.